SLAYER To Tour Europe With LAMB OF GOD, ANTHRAX And OBITUARY

SLAYER will embark on the European leg of its “farewell” tour in the fall. Support on the trek will come from LAMB OF GOD, ANTHRAX and OBITUARY.

So far the following dates have been leaked:

The full European tour is expected to be announced later this week.

This past January, SLAYER announced that it would do one last concert tour around the globe to thank their fans for all of their support over the years, for making the last three and a half decades so packed with good times and unforgettable experiences, and then move on.

SLAYER bassist/vocalist Tom Araya talked about his possible retirement in a 2016 interview with Loudwire. He said: “At 35 years, it’s time to collect my pension. [Laughs] This is a career move.” He continued: “I’m grateful that we’ve been around for 35 years; that’s a really long time. So, yeah, to me, it is. Because when we started off, everything was great, because you’re young and invincible. And then there came a time where I became a family man, and I had a tough time flying back and forth. And now, at this stage, at the level we’re at now, I can do that; I can fly home when I want to, on days off, and spend some time with my family, which is something I wasn’t able to do when [my kids] were growing up. Now they’re both older and mature. So now I take advantage of that.” Araya added: “Yeah, it just gets harder and harder to come back out on the road. 35 years is a long time.”

Tom also revealed another reason for his diminished enjoyment of the touring life. He said: “There’s things that have gone on in my life that have made me change how I play as a bass player. I had neck surgery, so I can’t headbang anymore. And that was a big part of what I enjoyed doing what I do — singing and headbanging. I liked knowing that I was one of the fucking badass headbangers. That played a big part. Now I just groove with the music, which is cool, because I’m grooving with the music and the feel of the songs, so that’s changed a little for me.”

SLAYER has been touring in support of its latest album, “Repentless”, which was released in September 2015 via Nuclear Blast. That effort marked the band’s first release since the death of SLAYER‘s co-founding guitarist Jeff Hanneman.

Hanneman contracted necrotizing fasciitis, also known as flesh-eating disease, in January 2011 from a spider bite in his backyard. The infection ravaged the flesh and tissues of Hanneman‘s arm, leading to numerous surgeries, skin grafts and intense periods of rehab that forced him into semi-retirement and left him near death at several points.

Hanneman eventually died in May 2013 from alcohol-related cirrhosis of the liver. He is credited for writing many of SLAYER‘s classic songs, including “Angel Of Death” and “South Of Heaven”.

Original SLAYER drummer Dave Lombardo was effectively fired from the band after sitting out the group’s Australian tour in February/March 2013 due to a contract dispute with the other members of SLAYER. He has since been replaced by Paul Bostaph, who was previously SLAYER‘s drummer from 1992 until 2001 and recorded four albums with the band.

SLAYER will kick off the first leg of its farewell world tour with a May 10 concert at San Diego’s Valley View Casino Center, with U.S. dates running through August 26 at San Jose, California’s SAP Center. 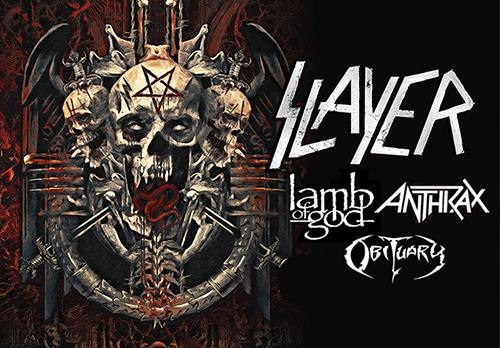