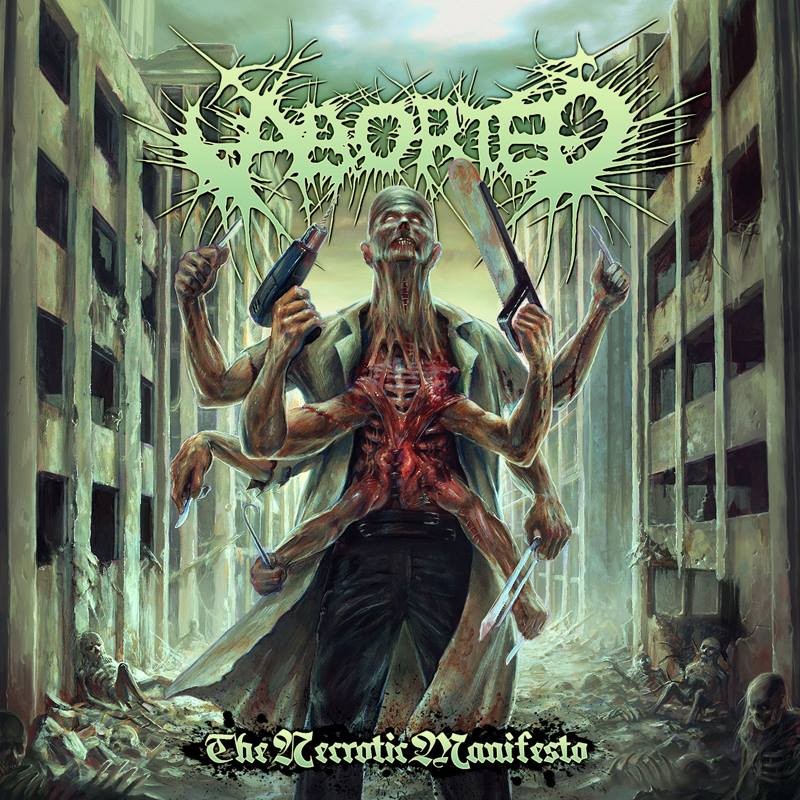 Belgium’s Aborted are back once again in full form with their newest on Century Media, The Necrotic Manifesto. Having gotten the opportunity to be a witness to Aborted’s recent becoming in the last 5 years, and having played a small role in helping guide the ship back on course, Aborted have exceeded expectations with The Necrotic Manifesto.

Aborted have always been one of my favorite death metal bands since first hearing Engineering the Dead. They combined all the elements I loved about the genre while bringing a new and unique style of their own. I remember being completely blown away by the bands progression when first hearing Goremageddon: The Saw and the Carnage Done. That album was the pinnacle of the bands height through years of various other releases, which were never bad by any means, but lacked the impact Goremaggedon provided. Then I was honored and privileged enough to have been a part of the Coronary Reconstruction EP, helping to reunite the band with the always amazing Dirk Verbeuren (of Goremageddon fame) behind the throne.  While previous releases teased with Goremaggedon stylings, Coronary Reconstruction was a complete return to form and the band have not looked back since. 2012’s Global Flatline was the best death metal release of the year, pushing limits and  boundaries to the hilt, beyond what I could of even imagined for the band. In other words, it left me speechless and extremely impressed, very similar to the feeling Goremaggedon had given me years prior.

The Necrotic Manifesto continues right where Global Flatline left off. Right when I thought the band couldn’t have possibly outdone themselves, they pushed the boundaries of  their brand of death metal even more to the point of combustion. If Global Flatline was a dragster with tailpipes flaming at 150 mph, then The Necrotic Manifesto is the same dragster with the needle of the speedometer breaking off and the wheels and body of the vehicle coming apart at the seams. The Necrotic Manifesto, for as technical and precise as it is, sounds like a band on the brink of destruction; pushing the limits so far they intend to destroy themselves. Ken Bedene is by far the most overlooked drummer in death metal. It is his manic blazing drumming that drives this machine, and without him would not be half as deadly. The guitars are ferocious as ever and the bass tone is as guttural as the rest of the delivery. Sven is by far one the best vocalists in the genre, bouncing between his signature brutal lows and his unique characteristic mid-range visceral scathing screams. All these elements combined form the perfect death metal machine, and The Necrotic Manifesto is a testament to that. It doesn’t hurt that Jacob Hansen was the man behind the knobs and is the only one that really knows how to make Aborted sound the absolute best. I truly believe Hansen is a silent member of the band at this point – Aborted’s sound is in part due to Hansen’s sonic formula.

There are too many outstanding tracks to name here, so I suggest you just listen to the entire album through as long as you can handle it’s intensity. The Necrotic Manifesto is a blistering affair and it will be interesting what happens next – this album leaves me with the question, where can they go from here?…Only Aborted knows the answer and I’ll be waiting for the response. 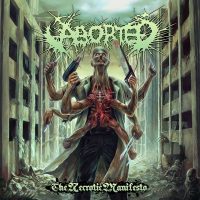 For Fans of:
Aborted