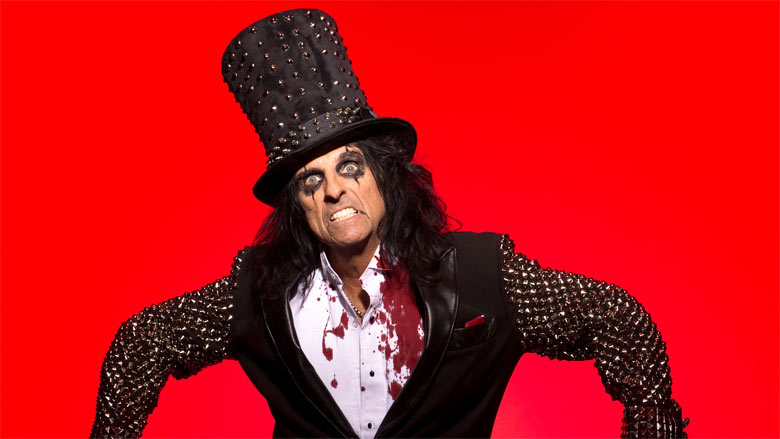 13th December 2016 0 By John Deaux
Let’s face it, 2016 has not been the best of years – turmoil, conflict, rock star deaths, only one Alice Cooper UK show…..
So 2017 is already looking up – more Alice, more of the time, in more of the UK with more gore, more fun and more I’m Eighteen, Billion Dollar Babies, Under My Wheels, School’s Out, Poison, No More Mr Nice Guy and the rest.  We feel better already.
Alice Cooper‘s first headline UK tour in 5 years comes with the anticipation of a big 2017 for Coop.
The seeds have been sewn this year, with Alice having just ended his more than 90 show 2016 tour with a final night at the legendary Pantages Theatre in Hollywood – joined for a celebratory “School’s Out” by rocker Butch Walker and fellow Hollywood Vampire Johnny Depp.
And America’s Black Friday Record Store Day saw the instant sellout of a limited edition vinyl 45 of “I’m Eighteen/Is It My Body” recorded live in Dallas in 2015 by Alice with fellow original Alice Cooper members Dennis Dunaway, Neal Smith and Michael Bruce.  The old high school and Rock and Roll Hall Of Fame friends had reunited for a surprise performance at local store Good Records.
Alice has also talked about his former fellow band members writing songs together for a new Alice Cooper album, being recorded with longtime producer Bob Ezrin this winter, due for 2017 release.
And for the UK tour, Alice is bringing 2 bands with him to reflect two of his best sides – outrageous theatrical controversy and the darker, gothic rock that Alice influenced.
The Mission were formed by two members of Sisters Of Mercy in 1986, Wayne Hussey and Craig Adams.  Songs like Wasteland, Tower Of Strength and Deliverance became classics of the 1980’s goth rock scene and beyond.  The band were heroes of alt rock, headlining Reading Festival twice and, on one tour, selling out 7 consecutive nights at London’s legendary Astoria Theatre.
“I remember during the summer of 1972 being on scout camp and hearing this new song on the radio that absolutely mesmerised me. School’s Out by Alice Cooper. Loved it, still do,” said The Mission’s Wayne Hussey. “Fast forward to 1987 and our first headline spot on the Friday night at Reading Festival. Headlining the Sunday was Alice Cooper. And now we’ve been invited by Alice to join him on his UK tour next November.”
The Tubes come from the same art school, shock rock background as Alice Cooper and, originally, the same city (and actually the same schools) – being formed by Phoenix, Arizona natives and appalling some of the same UK cities in the 1970s.
They made their name in psychedelic San Francisco however, honing their satirical act, concept albums and ambitious stage shows that showed an Alice level preference for self made props and costumes.  Frontman Fee Waybill’s characters – like addled British glam rocker Quay Lewd caused outrage in the UK, as did their bondage gear. 1977 saw their show banned in many British cities but the music cut through with the seminal White Punks On Dope defining their sound and they are still going strong with latest album Mondo Pulp.
Alice Cooper, plus The Mission and The Tubes presented by AEG live in the UK:
November 2017:
11th – Leeds – First Direct Arena
12th – Glasgow – The SSE Hydro
14th – Birmingham – Barclaycard Arena
15th – Manchester – Manchester Arena
16th – London – The SSE Arena, Wembley
Alice Cooper fan Pre-sale: 9 AM Wednesday 14 December
Tickets on general sale: 9 AM Friday 16 December
http://www.axs.com/uk/series/3675/alice-cooper-tickets?skin=aegliveuk
General admission ticket prices*
£40.00-£47.50
*excluding VIP packages
VIP:
Alice is offering several VIP packages at www.alicecooper.com, including meet and greet and a backstage tour.
AEG Live are offering pre-show packages, available at:
http://www.axs.com/uk/series/3675/alice-cooper-tickets?skin=aegliveuk 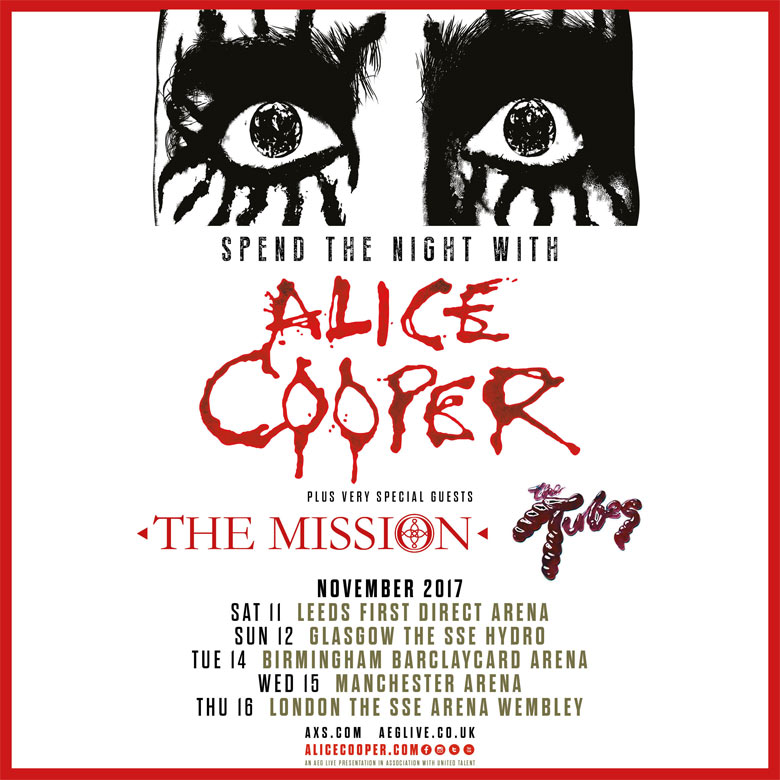