December is, more often than not an incredibly stressful time of year. Let’s be honest, the Christmas holidays drive you insane as you scramble for presents in overcrowded shops, are subject to the same ‘classic’ Christmas hits on repeat in every single store you go to (I swear to god someone give Mariah Carey what she wants already so she’ll shut the fuck up!) and you try your best to not overdose on mince pies. Luckily for All About The Rock, there was still work to be done to take our minds off of the festivities, courtesy of one of the biggest, most anticipated tours of the year.

Over the past couple of years, Alter Bridge have truly established themselves as one of the most accomplished hard rock / metal bands on the planet; regularly playing huge arena tours to increasingly larger crowds with each and every album, and once again in 2019 we welcomed them back to the UK as they promote their latest album “Walk The Sky”. On December 20th, Black Friday, AATR went along to the Motorpoint Arena in Cardiff to catch the tour, which naturally included some special guests…here’s what went down.

It’s worth noting that the original line-up for this tour was to include SEVENDUST but due to their drummer, Morgan Rose, being hospitalised with an illness shortly before the tour, they regrettably had to pull out of this UK run. At the time of writing everyone at AATR would like to wish Morgan a speedy recovery and we hope to see them back on the road soon.

With that said, tonight’s opening slot had now fallen into the hands of London lads THE RAVEN AGE [7] and to be fair what an impact they are having in heavy music in the UK. They take full advantage of this opportunity to announce themselves to the world, and announce themselves they do. “Bloom Of The Poison Seed” starts things off deceivingly as the instrumental piece delicately meanders through the venues sound system, but as the five-piece burst into “Betrayal Of The Mind” they pull no punches. Their blend of energetic and melodic classic metal is crisp and fresh and despite being only two albums into their career, they command that stage like seasoned veterans. With the bulk of their material taken off newest album “Conspiracy”, they promote themselves well, as tracks such as “Fleur de Lis” come across as modern metal anthems. They do finish up their short set with “Angel In Disgrace” taken off their debut “Darkness Will Rise” and it’s a pummelling affair that leaves the early crowd wanting more, and salivating at the prospect of the rest of the show. The Raven Age have everything they need to become one of the UK’s leading metal acts and they are certainly ones to keep an eye on as their profile continues to grow on the back of shows like this; a wonderful start.

Next up we have special guests and main support for the tour as a whole; SHINEDOWN [7] who themselves are still on a promotion cycle for their latest album “Attention Attention”. They admittedly have the nicest looking stage set-up of the night, with a personalised back drop of LED exclamation marks and their logo taking centre stage; it’s quite unique, and allows them to stand out visually as they entertain the crowd with an array of cuts from their back catalogue. “Devil” from the aforementioned album kicks things off with some blues-inspired riffs and hard hitting percussion and it starts a solid session of crowd interaction from here on in. “Monsters”, “Get Up” and also eventually closing track “Brilliant” make an appearance off the same album and you can tell there are A LOT of Shinedown fans in the house tonight, as the sing-alongs are very impressive. They even throw in a cover of LYNYRD SKYNYRD’s “Simple Man” which goes down very, and overall, Brent Smith and co do a “Brilliant” job if you will. On a personal note, they didn’t perform “Special”, which did frankly disappoint me…honestly guys you ruined my Christmas…thanks a bunch. I jest.

Finally then, we have tonight’s headliners, ALTER BRIDGE [8] who have the pleasure of walking out to a thoroughly warmed up, eager Welsh crowd, and they take full advantage with an impressive 17 track set. While their stage set-up isn’t as aesthetically pleasing as Shinedown’s, with only some generic LED screens creating a backdrop of random patterns and colours, they are solely relying on the music to stand out tonight and they’ve got plenty of tracks to pick from.

Truthfully, they don’t play very much at all off of their newest album “Walk The Sky”…they do open with “Wouldn’t You Rather” and include “Native Son”, but the bulk of their set treats the throng of fans to a choice selection of older cuts from their back catalogue. Going as far back as 04’ for tracks like “Broken Wings”, and 07’ for classics like “Blackbird”, Myles Kennedy, Mark Tremonti and co absolutely own the Motorpoint tonight and they have such a loyal, dedicated following; every word, every note, every movement is enjoyed by the heaving mass of fans at the front and the band lap it up.

They do have a tendency to write relatively long songs however, not prog-rock long, but drawn out shall we say, and for anyone not already a die-hard here tonight, the set does seem to go on forever in places, but for the casuals, the encore is well worth sticking around for. With a triple dose of “Metalingus”, new track “Godspeed” and finally “Addicted To Pain” to close the show, the whole crowd erupts with a final burst of energy, capping both the night, and the year off on a very high note indeed. There are people all around Cardiff this weekend worrying about what to buy for Christmas…but everyone in attendance tonight can agree that the rock and metal is all we really need. Forget commercialism, we have a community and tonight proves we’re one big extended family. For those about to rock, at the time of writing at least; Merry Christmas… 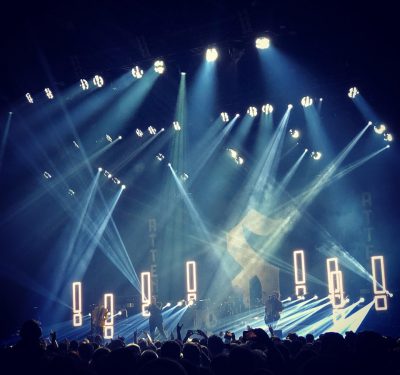 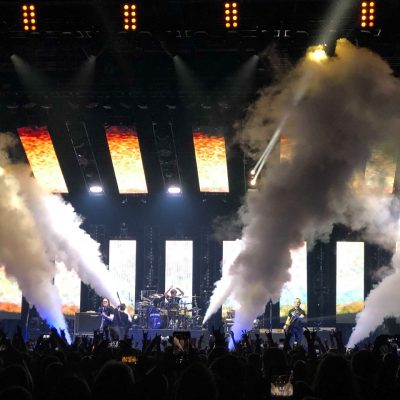