Angel Morgue – In The Morgue Of Angels

ANGEL MORGUE have unleashed their debut album ‘In The Morgue Of Angels’ via Redefining Darkness Records. ANGEL MORGUE play old school morbid induced death metal, showcasing that speed isn’t always required. The monolithic death metal soundscape is laden with thick morbidly crushing doomy riffs. The sepulchre stenched eerie riffs are the lynchpin of the morbid ravaging atmosphere that engulfs the listener like fungal mould on a cadaver. Through the reeking stench of crawling claustrophobic doom, ANGEL MORGUE will despairing hammer the nail more swiftly into the putrid skin with a full force barrage attack. The drums blast away and lead the explosion from the murky depths of the grave and send the brooding atmosphere into a more destructive soundscape. The vocals are in a raspy demonic tone and add the final strokes to the blackened doomy death release and are fitting to the bleak soundscape on offer.

While this is a stellar release and is recommended for fans of old school death metal and doom infused death. The issue with the release is the production, the mix of the album isn’t balanced and when ANGEL MORGUE switch from the slow dirge to the fast explosion goes muddy and chaotic and takes away from the impact they want to achieve. However this is a solid debut album and if they carry on in this vein then their future releases will be bleak, brutal and uncompromising…what’s not to like? 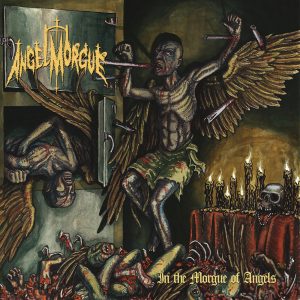 Track Listing
1. Lust Murder
2. Raped In Church
3. Sacrificial War Of Death
4. Various Stages Of Decomposition
5. Holocaust Perversions
6. The Sigil And The Key
7. Cosmic Torment
8. In The Morgue Of Angels