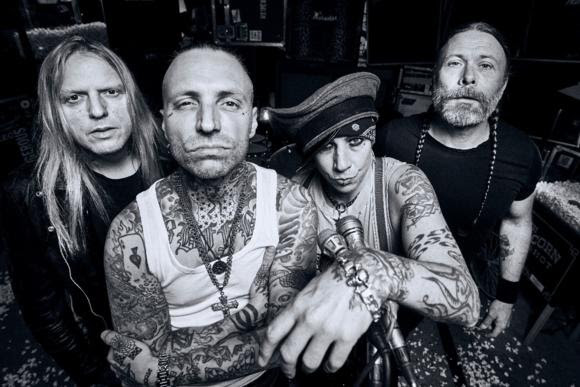 With an impressive track record of eight critically acclaimed studio albums, including “Total 13” and “Making Enemies is Good”, and extensive touring around the world, BACKYARD BABIES have earned their reputation as a true force of nature.

It’s been a long wait since the release of their latest album, “Four by Four”, in 2015, but now BACKYARD BABIES are back – stronger than ever – with their new single, ‘Shovin’ Rocks’ as a part of the forthcoming album “Sliver and Gold” which is scheduled for an early 2019 release.

The band comments, “We will soon enough celebrate 30 years as Backyard Babies, with the original lineup intact, and ‘Shovin’ Rocks’ is in full covering that fact. This is our first single in a major since ‘Look At You’, our breakthrough single from 1998. If you don’t’ love this, then you don’t love rock’n’roll.”

The video was directed by the band’s drummer Peder Carlsson. ‘Shovin’ Rocks’ was produced by Chips Kiesbye.

Jens Prueter, Head of A&R Century Media Europe comments on signing BACKYARD BABIES: “It’s no surprise that you meet twice if both a label and a band are already around for almost 30 years. It’s been 12 years since we worked together on the “People Like People Like People Like Us” album and it feels great to welcome back the Backyard Babies to celebrate their 30th anniversary of Rock’n’Roll with a new album in early 2019. And the new single is a perfect way to invite the guests to a party that won’t end soon. Some people don’t get older but just stronger. People like us.”

More dates to be announced soon!