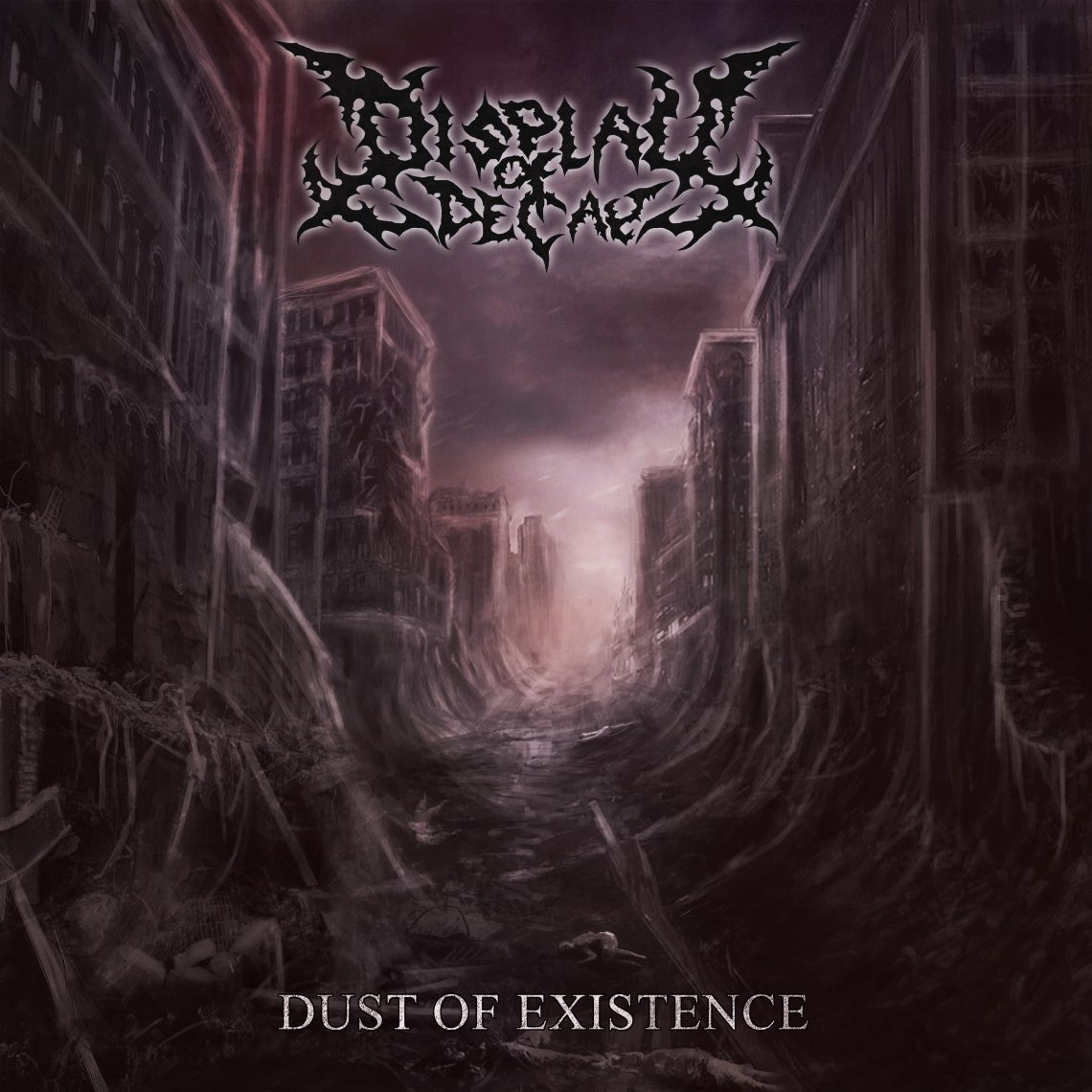 One of Edmonton, AB’s most vicious death metal bands DISPLAY OF DECAY has teamed up with Beatroute to unleash their latest single ‘Maruta’ off their upcoming album ‘Dust In Existence’ due out on September 22nd. The track is streaming along with an interview with guitarist Sean Watson at the following link: http://beatroute.ca/2015/09/11/albertas-death-metal-infection-display-of-decay-releases-new-album-maruta-track-premiere/

Widely noted for bringing a unique blend of old school death metal, with tinges of thrash and doom metal. The band has spread their infection across Western Canada sharing the stage alongside other elite acts such as The Faceless, Origin, Beyond Creation & more. After four well received indie releases, DISPLAY OF DECAY is ready to unleash its next full length “Dust of Existence” that features eight aural assaulting tracks that will set the mosh pits ablaze later this Fall 2015.

If you live in the Edmonton or Calgary area, best to mark down these upcoming show dates:

About: Formed in 2007, Display of Decay is widely noted for bringing a unique blend of old school death metal, with tinges of thrash and doom metal. Hailing from Edmonton, the band has spread their infection across Western Canada, sharing the stage alongside other elite acts such as, The Faceless, Origin, Beyond Creation & more..After four well received indie releases, DISPLAY OF DECAY is ready to unleash its next full length “Dust of Existence” that features eight aural assaulting tracks that will set the mosh pits ablaze.  Due out later this Fall 2015 with the support of a Western Canadian tour, “Dust of Existence” is a direct epilogue to their 2014 EP, “Outbreak of Infection”.“We aimed to keep a similar style of groove on this record as we had on previous releases, with heavy punchy riffs that are near impossible to keep out of your head, but still maintain that raw edge we have become known for. With the artwork as well, we wanted it portrayed in such fashion that it plays out the story being told from the Outbreak record to this new record, which is basically a devastating virus that has been unleashed upon mankind, terrorizing and annihilating everything in its path, “Dust of Existence” is the aftermath of these events. Nothing left but scattered remains of what was once there. ” comments guitarist Sean Watson.

With a few of the tracks on the record written during the “Outbreak of Infection” recording sessions, which the band felt weren’t quite ready at the time to be recorded. During this writing session for “Dust of Existence”, DISPLAY OF DECAY especially tried to make sure each and every song was very diverse from the rest of the tracks.

Watson explains. “We didn’t want it to feel as though there was any formula or predictability going on. We find that far too many metal bands form a niche that is their “go-to” when it comes to writing, and that it becomes a predictable comfort-zone that can make a record feel as though the same track is being played from start to finish and really make the listener feel completely disengaged from what is actually being played in front of them. We like to throw whatever change-ups or fills in that I can to really make the listener that much more integrated into the tracks.”

Track by Track – ‘Dust of Existence’:

1. Created to Kill – When DISPLAY OF DECAY approached the writing of this song, they were originally beginning to rework and old track that had been scrapped about 5 years ago. When they made a couple changes and the track turned into something completely different than what they had anticipated. This is one of the fastest if not the fastest track on the record, where they started incorporating more blast beats, and very heavy gallops on the guitars. The lyrics are based on events from 19th century Europe, around the origination of Frankenstein’s monster, and the attempts at resurrecting someone from the dead.

2. Relentless Reprisal – This track was lyrically of a personal matter. Its concept is that of getting revenge in the most gruesome of ways against somebody who had wronged you in one way or another.

3. High Voltage Castration – This was one of the last tracks written for the album, and is one of the most challenging of their entire catalog to perform, but also one of the most enjoyable. Its written about the “Tucker Telephone,” which was a torture device from the 1960’s that consisted of an old hand-crank telephone and an electric generator. If information was required of a prisoner, or they were found to be disobedient, they would be taken to a hospital room and restrained to a table, where a ground wire would be attached to the large toe, and the hot wire would be attached to the genitals, causing a massive electrical current to ensue, typically causing major deformation to the appendage.

4. Maruta – Based off the events of the Japanese “Unit 731″ experiments, this song outlines some of the gruesome acts that were bestowed upon prisoners during the WWII, which goes from live artillery testing, all the way to forced organ failures and vivisection.

5. Cellar Goreatory – Since the band’s inception, they have always tried to stay closely entwined to the early roots of death metal, and this track in particular follows that very in your face, savage groove that you cannot help but bang your head along to. The lyrical concept was based on a story guitarist Sean Watson was told from an acquaintance who had returned from vacation, which in a short version of the story, the person had a near fatal encounter with someone who was later to have found harboring the bodies of dead female tourists in their basement.

6. Messiah Complex – This was one of the earlier tracks DISPLAY OF DECAY had been performing before the recording process had begun for ‘Dust of Existence’. It starts off fairly slow and melodic, but has very heavy bridge sections, and takes a fast pace very quickly towards the ending.

7. Nyctophilia – This was the first track written out of the eight. It keeps a much slower pace than the rest of the album, but showcases a very dark tone from start to finish.

8. Dust of Existence – When DISPLAY OF DECAY began writing the lyrics for this song, There was no music behind it, and the band had a much different concept that was eventually altered to fit the story being told. When the writing of this track began, they knew right away it was easily going to be the longest song, it had to, it basically is the calm after the storm. With all that was said and done from “Outbreak of Infection” right to where they are now with “Dust of Existence,” this track basically plays out the events that have unfolded, both through the songs, and in real life events around being in this band. Many things have changed since their formation in 2007, and the stories that could be told over that 8 years could last for days, and this song is a testament to the past, present, and future of DISPLAY OF DECAY.