6th July 2016 0 By John Deaux
Beholder announce special guest inclusion on Onslaught ‘The Force Revisited’ UK-IRE Tour.
Onslaught return to home soil celebrating the 30th anniversary of their legendary opus ‘The Force’, while Beholder will be delivering tracks from their highly acclaimed ‘Reflections’ album which has taken the band to the next level:
“Progressive edged metallers Beholder have impressed…excellently crafted and crushingly performed…this is without a doubt the most cohesive collection of songs that Beholder have put to their name to so far” – Metal Hammer
“Beholder meld the labyrinthine and the massive to imposing effect…it all hangs together with bloody minded, a**-kicking panache” – Kerrang!
Beholder frontman Simon Hall:  “Loving the thought of this tour already, and to be honest being on a bill with the mighty Onslaught and Anihilated means the punters get a real tour de force  ……. Tour de Force ….. get it? “
Onslaught guitarist Nige Rockett comments “We are well and truly stoked to announce our upcoming tour of the UK & Ireland this Autumn, by the time we hit the road in November it will be well over 2 and a half years since we did the last run, we feel the time is now right to bring things home once again. Everything is gonna be stripped back and brutal, just as Thrash Metal should be!” 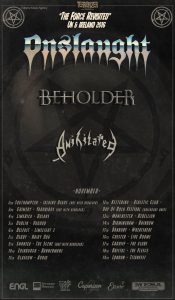 Ayreon’s first 2 albums to be released on vinyl