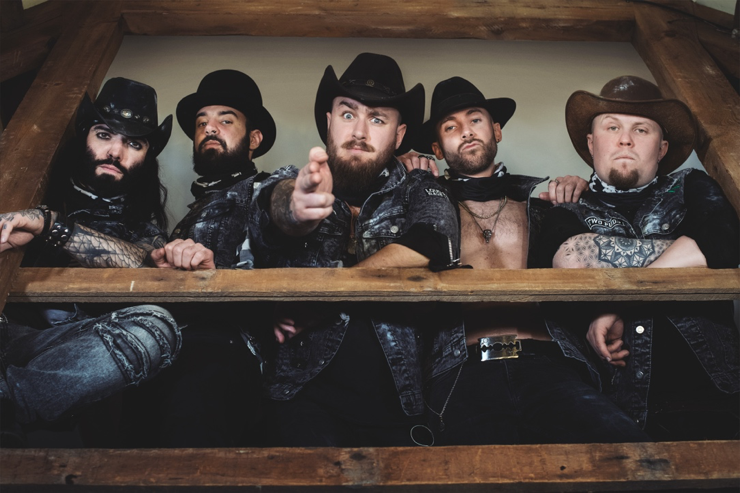 Ladies’ Man is a fly-on-the-wall account of a day in the life of lead singer and guitarist CJ Handsome. It touches on the struggles and hardships of his rock addiction and being the most damn handsome outlaw in the West.

The band say: “Down on the ranch or out on the road, we see the effects of rock addiction on a daily basis and we feel it’s a really overlooked condition that just doesn’t get taken seriously. So we’re really hoping to raise awareness for it with Ladies’ Man; our most heartfelt song to date”
The track is poised to become an instant classic, with critics crediting the track as being “Packed with the kind of pertinent and thought-provoking lyrics that give great wordsmiths like Dylan and Cohen a run for their money… an absolute shoe-in for a prestigious songwriting gong at The Ivor Novello Awards in 2020” – Planet Rock.
The release is accompanied by a gloriously daft video. The band set the bar sky high with their sensational LEGO-stop motion video for debut single “Hoedown Showdown”, but their new offering features everything a good video should; from snorkels to angry grannies to aliens on planet Mars.
Having wowed audiences across Europe with some killer shows supporting the likes of Alestorm and Massive Wagons earlier this year, the band are now spending a little time back on the ranch penning new tunes inspired by their recent antics.
New music from “Worcester’s Most Wanted” coming very soon, in the meantime wrap your ears around Ladies’ Man and “Boom, Boom! Bang, Bang!” ’til you drop!
BOOTYARD BANDITS are: