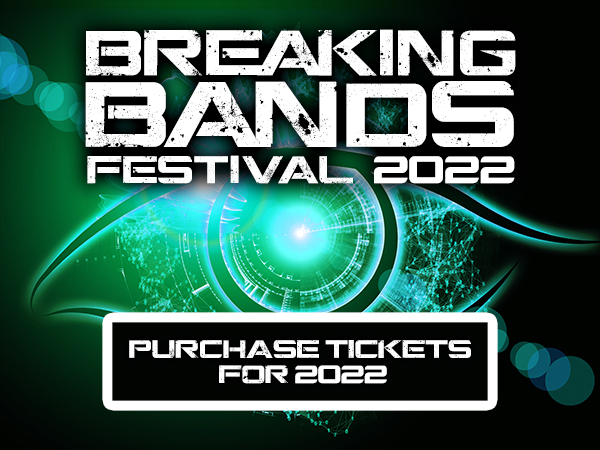 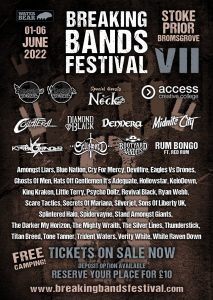 As the pandemic began back in March 2020 and businesses started getting financially hit the Government promised to help out. A year later and many businesses including Breaking Bands Festival have received absolutely zero funding help no matter how many times we applied.

With the festival being postponed in 2020 and then again for 2021 it has left the festival down on funds for 2022. The Directors have said they will personally fill up the £5,000 hole should they have to but after a round of think tanks with members of the team and the public, a fundraiser was suggested and work began.

So, as a community, Breaking Bands Festival are offering a full range of merch for sale in the hope that profits from sales will help to bridge the financial gap and guarantee the festivals future far beyond 2022.

We would really love your help as members of the media in helping us spread the word about our fundraising efforts. We are available for behind the scenes interviews, can supply full press releases and more. Anything you can do to help shine a torch on this would be a massive help to all of us in the industry. The fundraiser is running right up until the end of May 2021 when we have our prize draws, the double CD album is released and our fundraising total is announced.

We said we were not finished when we made the latest announcements and we are proudly shouting from the rooftops about a fist full of additional bands for next years return to Stoke Prior and Breaking Bands 7th Festival.With the extension of the festival to 5 full days, that has given room to make some exciting additions to the festival. Firstly, we are so pleased to say that Essex rockers White Raven Down will (yes, we know Paul will be happy) finally be taking the stage at the festival. Having been in attendance as customers for the past few years the team felt it was the right time to give them that stage time. With their debut album in the works for release in 2022, the band are really working up an appetite for a big future.
WHITE RAVEN DOWN:

Next up we have a delightful refreshing band in the name of Verity White from Cheltenham who have been cooking up quite a storm across the nwocr scene. Already 2 albums and 2 ep’s done, the band are working on new material and are knocking on the doors of the bigger festivals and will be supporting Toyah in November 2021. Verity White stuck out as one of the happiest bands we’d ever seen during the virtual festival last year with a great attitude towards the music scene and we are very excited to finally get them to come to Breaking Bands.

Now to our second Friday night headliners (venue stage). They have played Breaking Bands Festival and even headlined in the past as Red Rum, but Friday night takes a whole new level of WTF when we bring Rum Bongo featuring Red Rum to Stoke Prior. Something that has been on the table with guitarist Sam Wood and the band for a long time now, we decided to seize the moment with the extended festival and bring something completely off the wall to the stage! If you were in Ibiza for the HRH Roadtrip in 2019 and happened to be in Ibiza Rocks Cafe for the acoustic sessions, its highly likely you danced to ‘Bare Necessities’ from The Jungle Book or sang top of your lungs to ‘Teenage Dirtbag’ or another disco classic. We can guarantee Disney songs like you’ve never heard before along with an abundance of crazy songs to sing along to and finish Friday night with a frenzy!

On to Saturday night and a sub-headliner to make you go yeehaaa! Worcester’s very own country rockers Bootyard Bandits. Comprised of ex-members of The Defiled, Grim Reaper, Fury and Villains, these cowboys come armed with an arsenal of catchy anthems such as “Hoedown Showdown”, “Cøuntry Music” and “One Hell Of A Night”, and bring a live show like no other t’boot. Saddle up for a big party!

And last but not least, onto Sunday night and we bring a real head turning band to take to the marquee stage as sub-headliners. Intense, sensual and arcane, Diamond Black are a dark-rock quartet from London, UK. Founded by Ben Christo (guitarist of The Sisters of Mercy), DB give you crushing riffs, mesmerizing electronica and cinematic choruses, displaying shades of Alterbridge, Ghost, The Cult and HIM in a compelling fusion they call ‘DARK ANTHEMS’. Michael McKeegan (Therapy?) describes them as one of the most exciting new bands he’s heard in years. A powerful dark rock band with melody, meaning and mystery we are over the moon to be bringing them to the festival weekend.

So, that’s your fist-ful of bands added making this 5 day weekend festival already one of the biggest and best to look forward to in 2022. With around 80 weekend tickets remaining, we expect the festival to be sold out well in advance. You can book your weekend tickets for just £50 or £10 deposit and pay the balance in October 2021.

Grab your ticket today from our online store!