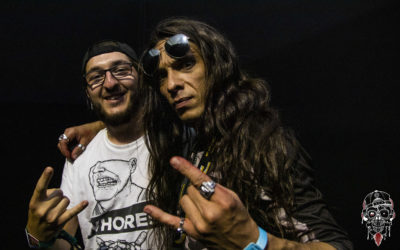 We were lucky enough to land an interview with Carach Angrens vocalist and all round nice guy Dennis Droomers at Hellfest.

Tom – So, your the main guy in Carach Angren right?

Tom – It’s hard to tell with out all the corpse paint on!

Dennis – Ha, well yeah that’s the idea of it. 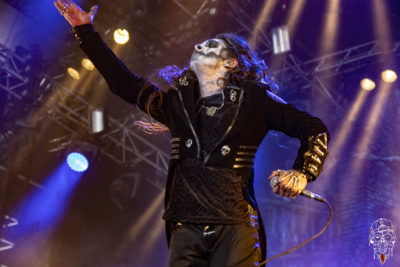 Tom – Your about a third through your current tour at the moment….

Dennis – Yeah about 7 weeks in total, so a month to go.

Dennis – Yeah it’s been really good so far, it started a little slow but it’s getting better. Yeah it’s our first headline tour in europe so yeah…

Dennis – Yeah we actually did our first headline tour last year in the states so it’s pretty new for us, but we like it.

Tom – So any sold out show or is it really busy?

Dennis – Not sold out but yeah, really busy, but let’s see.

Tom – It’s all good though. Yeah, you’ve started writing the follow up to Dance and Laugh Against The Rotten and how is that going?

Tom – How much have you got written, roughly?

Dennis – For the new album? We have a lot of music written, we are still busy on lyrics and stuff but I can’t say too much about it ya know? Ha. But I can say it will be about coming back from the dead. Yeah we are very stoked about it.

Tom – Is it just the three of you that are permanent members still?

Dennis – Actually yes, it is just Namtar, Ardek and me, and Bastiaan Boh who is our close friend, and we consider him a fourth member. But yeah it’s us three, we call ourselves the triangle.

Tom – So you three do all the writing then? Who does all the symphonic parts?

Tom – Are they any new elements on the new album? So is it heavier, or more symphonic or maybe even groovier or something?

Dennis – It’s actually we tried to devide it a little bit so it’s not all, for example, loud, fast, dark songs. For example in the latest album in Pitch Black Box song it’s pretty much groovy, we try a little bit to do the same thing, like make it dynamic so it’s pretty different songs. Yeah, it’s exciting. 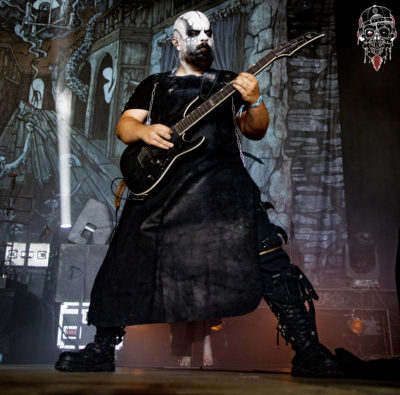 Tom – Do you find it easy to add these new ideas?

Dennis – Yes and no. All of times I think it’s a lot for artists that have made maybe four or five albums and they’ve got six months between albums and they are sitting around thinking ya know, how are we guna get it above that (the bar set high).

Donk – To take it in a different direction or something.

Dennis – Yeah, yeah, for me I think it’s a matter of just letting go and believing in your own feelings. When you just got the right idea go with it. We got a few new songs that are already the right idea is exactly there, so yeah. (Smiles)

Tom – So how many wrong ideas have you had? Song’s you’ve wrote and thought, no that’s shit!

Dennis – (Laughs) Ha, wrong ideas? No it doesn’t work like that. When we start writing, if a riff comes along we will talk about it and if it doesn’t grab us then we just let it go right away.

Tom – So you don’t really save it and use it later?

Dennis – Yeah, yeah, if it’s good to us we will. I gotta say that there was one song on this new album I don’t think we ever switched so much on another song. We had this one song and we changed the whole take, we put vocals over it and changed it again, it’s been one big fucking transformation haha but now it’s there! 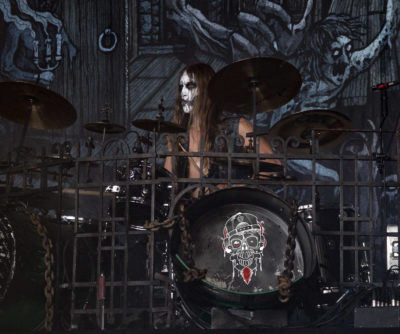 Tom – So we already mentioned the new album is going to be a concept album, where do you get the idea for lyrics from?

Dennis – Errm a little bit of everything. I think for me in most cases is movies, ya know old movies, theatrical things. Yeah ya know we try to act more or less, it’s a visual thing. But it can also be books and what else is important to us is reality, real life thing. Like remember when you were a kid and you saw your first horror movie? Some of that. Listen to your first black metal album, yeah its kinda hard to top that when you get older ya know? You just feel that horror when your younger. I think primal fear too ya know? It’s like the things that scare you the most, we try to evoke that all the time. So that’s a big thing for us is reality, darkness and reality yeah.

Tom – Seeing as your music is very theatrical and symphonic etc have you guys ever thought about touring with a live orchestra? Is that something you’ve talked about?

Dennis – We have seen many bands do it, also it’s a big arrangement to have done ya know?

Tom – Yeah obviously if there was a bit more money kicking about and things?

Tom – Is it something you’d like to do though?

Dennis – It’s not a goal for us, it’s not all too new ya know. Many bands have been doing it already but I think it could happen in the future yeah, why not?

Tom – That would be cool. So, last question. How excited are you to be playing tonight?

Tom – Have you played here before?

Dennis – Yes we played here before, I’m not sure if we are on the same stage or not. It was so many festivals ago. But we aim for the main stage!

Tom – And I’m sure you’ll get there one day!

Dennis – We hope so too! 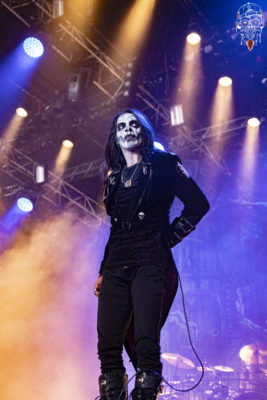 We would like to thank Dennis for being such an awesome guy and letting us waffle some questions his way. He was so kind and such a bloody nice person too! Thank you to Jessica at Season Of Mist for organizing and hosting us! Till next time.