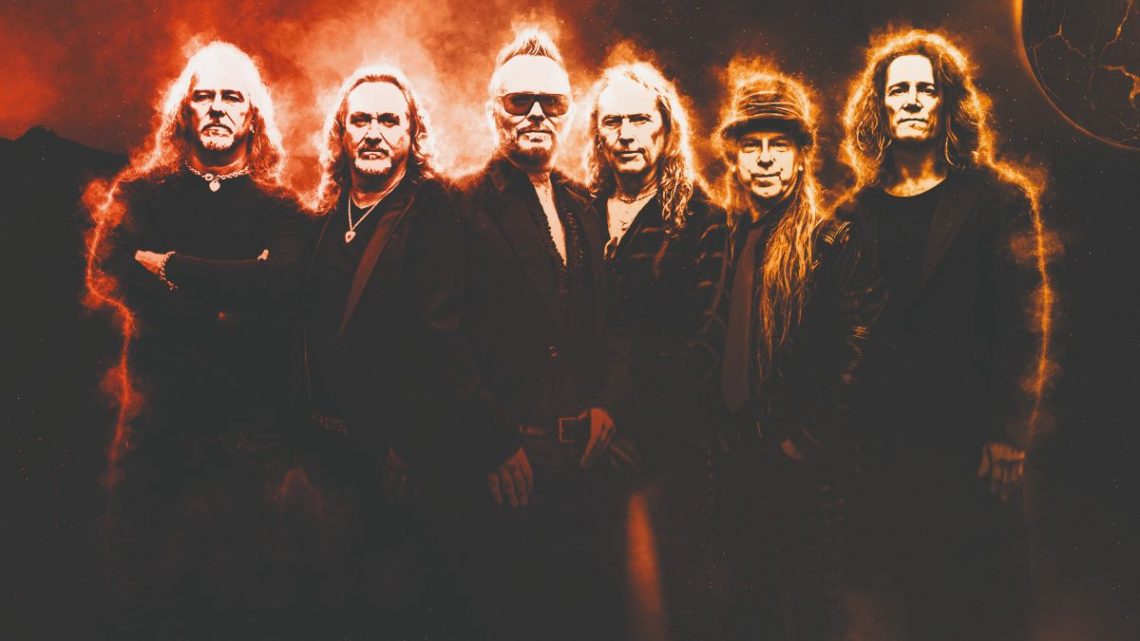 “…IT’S A WORLDWIDE MISSION…’ “The album title for us reflects the feelings that so many people have been experiencing over the last two unprecedented years of darkness. We feel it is time to ‘turn the lights back on’ and shine some positivity and joyousness…” GH

Kickstart the Sun, which took nine solid months to complete, and was partly recorded at the legendary RAK Studios in London, has once more raised the bar that was already set super high by their previous chart hitting albums. The familiar team of producer/guitarist and principal songwriter Greg Hart and engineer Ian Caple sees the new album clocking in at a ‘stratospheric sixty-three minutes’ across a double album to be released in a variety of coloured formats, with an expanded limited double CD also on offer. The album features some very special guests who help to confirm that the band are pushing their musical boundaries to the absolute maximum on this epic journey with no less than fifteen brand new songs.

Joining the CATS on the fifteen song opus is the legendary Pedal steel player B.J. Cole (the man behind Tiny Dancer, Baker Street and No Regrets by the Walker Brothers amongst a star studded CV) who guests on several tracks. Alongside B.J. is the Australian virtuoso Ian Cooper dubbed the ‘One Man String Orchestra’ and for the first time a real brass and horn section courtesy of Jack Birchwood. But, there is more! Guesting vocally alongside seventh cat Mick Wilson are Emily Lynne and Lara Smiles from the Australian Pink Floyd and ‘The Duchess’ Julie Maguire, who gets to sing an incredible duet with CAT frontman and co-writer Damien Edwards.

The familiar CAT line-up of Steevi Bacon on drums/co-writer, Dean Howard on guitars, Jeff Brown on bass/vocals and the ‘Mad Hatter himself’ Andy Stewart on keyboards, alongside Damien and Greg have all delivered ‘performances of giants’ according to engineer Ian Caple.

Greg Hart once more picks up the story: “After the overwhelming success of Atlantis we knew that we had to push even further with this album as very early on, it became clear that the new songs were going to be very special. Two in particular I knew had the potential to be, for me, the greatest and most emotive CATS’ songs ever. Adding in our special guests was a logical step in helping us make the ‘cinematic’ sound we strived to achieve for the album. I assure you it is a huge sound that we believe will blow people away…we say it every album of course, but this time there’s something else, something more magical in the grooves for every listener.”

Although the album centres around three epic songs including the title track, woven amongst the bombast the signature CATS’ power-pop-sound is still very much in place, with some beautiful balladry and more than a sprinkling of 70s infused pomp rock. With Steevi and Damien contributing more to the writing, CATS seem to have discovered another level in terms of artistry. Sky-scraping vocals, drum solos, guitar battles, an army of keyboards and even orchestral sections all add up to ensure that the listener is taken on a triumphant journey that they will never want to end. There is even some serious foot stompin’ from a group of die-hard CAT Fans who visited Echo Zoo Studio and RAK Studios during the recording! The whole album climaxes on side four with ten minutes of what the band call ‘their finest hour’. The album artwork, once again by Andy Kitson, helps to tell the cinematic story of Kickstart The Sun.

“It is a real ‘musical chocolate box’ featuring all the things that we are now known for and, although we broke the bank and beyond making this album, we knew we had to put everything on the line for it as the songs deserved it… It may well be the most expensive album we will ever make but we are confident everyone will fully appreciate its majesty. ‘Kickstart’ encapsulates everything that is CATS in SPACE and much more … we are all super proud of it.” 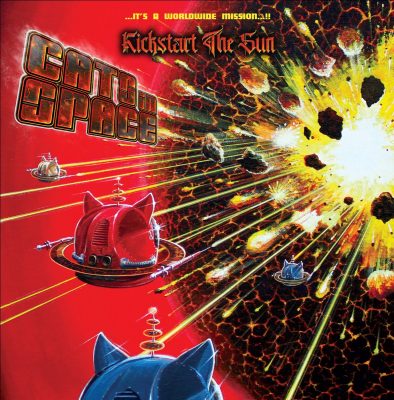 KICKSTART THE SUN / THE STORY SO FAR

The wonderfully titled Poke The Witch led the way as the first single being released on APRIL 15th on coloured 7” vinyl and accompanies a wonderful video courtesy of film maker James Heron.

A second single Teenage Millionaires continues the theme of its predecessor and is set for release on JUNE 3rd again in coloured 7” vinyl and video.

Kickstart the Sun the album, is set for release on JULY 29th . It will be available as a limited edition double RED MARBLE vinyl with booklet, a YELLOW MARBLE vinyl with booklet and as a super deluxe double CD including a 10 track bonus disc with exclusive recordings and alternative mixes. A host of new merchandise will also be available from the band’s WebStore to coincide with all releases.

All formats will be distributed throughout the UK and Europe by CARGO RECORDS.

*** The band will be making their first festival headline appearance at the CAMBRIDGE ROCK FESTIVAL on JUNE 18th and will also appear as special guests to King King at Chepstow Castle on August 20th .

*** The band then begin their 2022 headline UK tour on September 29th and the Kickstart the Sun tour looks set to be their biggest yet, with a third exclusive double A-side tour single released to accompany the dates.

If that is not enough, more live shows are in discussion and they even have their sights set on America and Canada, as the band have recently made waves across the pond courtesy of some wonderful YouTube channels, radio stations and road trips to Las Vegas.

So kick back and be prepared for what will be the most eagerly awaited release of 2022.