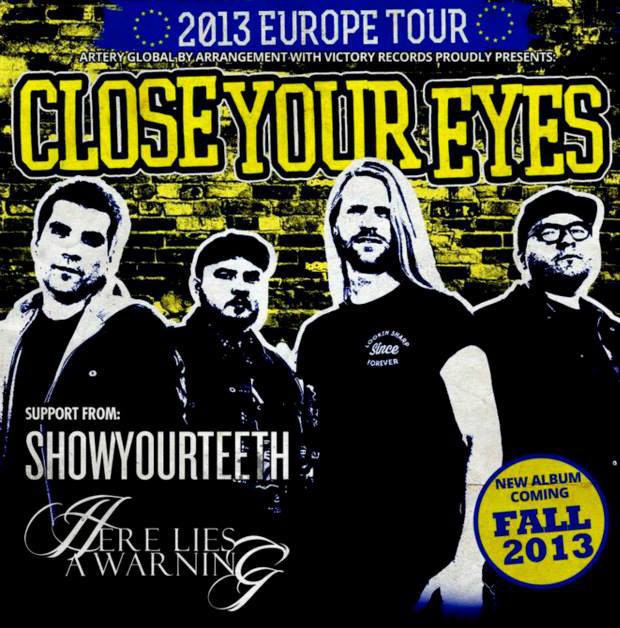 Its Saturday night and I am in Oldham ready for the Close Your Eyes gig at the new venue Basement Live. First things first though, I am starving and noticed that the bands had only just arrived so I took the opportunity to grab some food and let the bands get their equipment from the vans into the venue.

A little while later and I am back at the venue speaking to the tour manager Kaz (who happens to be one of the guitarists in main support band Here Lies A Warning). He advises me that Sam and Brett from Close Your Eyes are out grabbing some food and will be back for interviews in about 5-10 minutes. Sure enough about 10 minutes later Sam and Brett are back and we go outside for the interview which can be heard below.

So back in the venue and fans are starting to arrive now. There are 5 bands on the bill tonight and first up was Oldham based ‘Throw Us To The Wolves‘ who deliver a short but good set.

Next up was Fed To The Ocean who are hailed as being from Manchester/North Wales (a bit of a distance between the 2 areas there but thats what their Facebook page says). Anyway, these guys put on a killer set and managed to get a few of the people away from the bar area and up to the stage area.

Once their set had finished it was time for Austrian band Show Your Teeth to grace the stage. They had a couple of fans showing their hardcore moves quite well but struggled to get people away from the bar, at one point someone firing him the middle finger when he was trying to get people to the stage area. That was until Sam from Close Your Eyes came and played drums for them during their last song. The guy was crazy on the drums and reminded me of a blonde Animal from The Muppets – very talented indeed!

Scottish Metalcore band Here Lies A Warning are up next and while they were waiting to get their equipment on stage I was still talking to Kaz, he was telling me how he had fallen off the stage the night before and how funny it was. He also took the opportunity to tell me that he had wore his Cradle of Filth t-shirt every night of the tour and it hadn’t been washed. He then thought it would be a real good idea to shove it in my nose saying “Here, have a smell!” – yeah, cheers Kaz!

These guys were really tight and had more fans watching them – the bar area was clear and Sam made a guest appearance here also, he did a duet (for want of a better word) during one of their songs – this was a really good set and I admire the singer (Leonardus) who advised everyone their album ‘Frontiers‘ is available on BandCamp and when it asks you how much do you want to pay for it, just put a zero in their because they don’t want you to pay for it, they want you to hear their music – a big hats off for that (I am currently listening to Frontiers as I am typing this review).

So, 5 hours after I arrived at the venue it was time for the band who everyone came to see Close Your Eyes the only problem was that by the time their equipment had been set up and sound checks etc were completed it it was 11pm when they came onto the stage and this reviewer needed to get the last tram home – I was convinced it was 11:30 (and it normally is…..during the week – not at weekend as I have since discovered!?!). So all I caught was the first 2 songs from Close Your Eyes and they had the crowd eating out the palms of their hands.

People grabbing microphones and singing along, people all over the pit area showing everyone their moves and that was as I said during the first 2 songs. Gutted I had to leave early, however the night overall (what I saw) was a success and the next time Close Your Eyes are back on this side of the pond I will definitely go to see them again (hopefully this time for the whole set). The interview with Sam and Brett can be heard below.