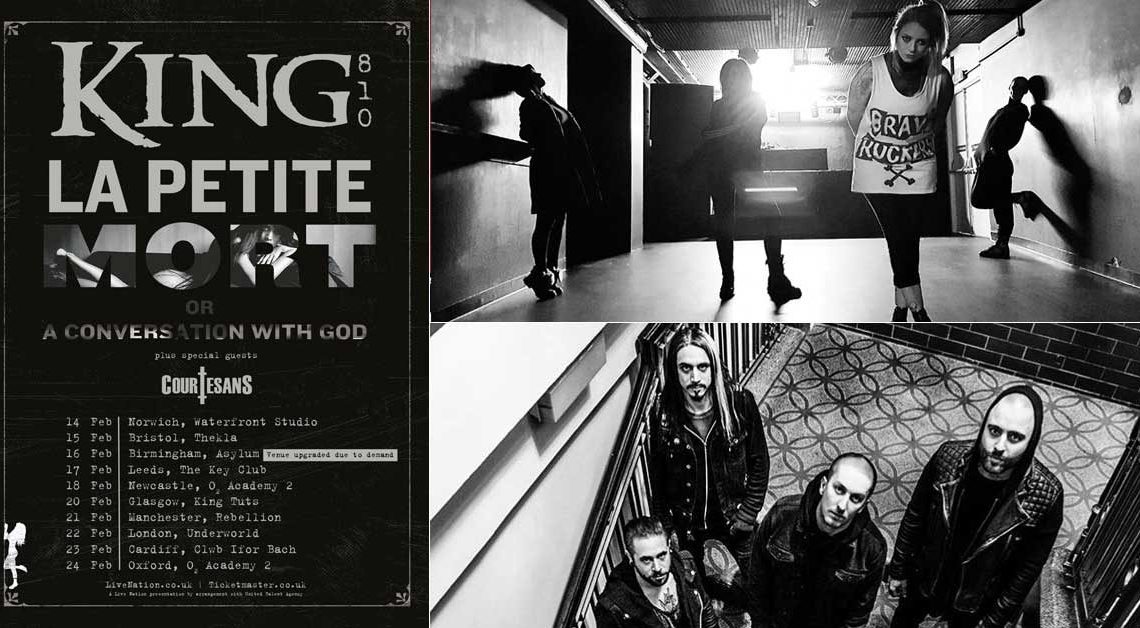 A mild night in Glasgow and heading to a venue I had never been to before to watch the Courtesans and check off King 810 from my bucket list of bands to see.

King Tuts Wah Wah Hut is a really nice, intimate venue. A bar during the day serving good food at a reasonable price and then a live venue at night. The live space has a lovely low ceiling which helps with the acoustics and the view is unhindered. Especially if you climb the 4/5 steps and stand behind the mixing desk (where I was perched happily). A nice touch to the chalk advertising boards that are scattered throughout the bar is the inclusion of a ‘For Fans Of’ section next to who will be playing in the future.

The Courtesans hit the stage at around 9:30 for a short 35 minute set which featured the Mesmerize, John Doe and Feel The Same from their latest offering before ending their set with an angry and political new track Monkey Logic. Despite being plagued with a muddy front of house sound for the 1st half of their set, the girls tore the audience a new one. Sinead was on fine form vocally and flanked by Agnes on bass and Safire on guitar who provided amazing, ethereal backing vocals. With Vikki off to one side on the drums (King 810s took center stage), Miss Brown once again proved that you don’t need to be a heavy hitter to get the most out of the drums. Beautifully precise and totally effortless. The Courtesans are well deserving of the accolades and the waves they are currently making in the industry. Hopefully it won’t be long for some new product to drop.

10:15pm and King 810 hit the stage as a 3 piece. Andrew Beal (guitarist) was nowhere to be seen so his parts were obviously piped in. As a 3 piece they sounded OK but it was glaringly obvious that David Gunn (vocals) and Eugene Gill (bass) struggle to perform as a trio as there was no real interaction with stage right where Andrew would be. But they were fun to watch and Andrew Workman (who took much of my focus) is a superb drummer who has so much energy behind a kit that it should be made illegal.

The sound out front was good (even if the guitar track was really low in the mix) and proved that the sheer presence and volume of just the rhythm section carries the music forward. The audience lapped up the lyrical performance and there were numerous attempts to start a circle pit which all failed due to there not being enough room to form one. But that didn’t deter the crowd from trying to mosh as well as pogo. I’m sure that there’s going to be a lot of sore throats and many folk with very little voice left (which should be interesting if they work in a customer care call center) as the congregation were, at times, louder than the band. Especially during the encore of Killem All.

Overall it was a great night, spurred on by some great company. It was also really nice to catch up with some familiar faces as well as making a few new gig buddies. Which all adds to the concert going experience.