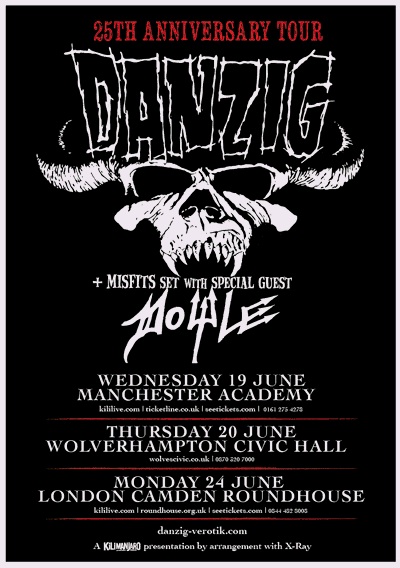 Evil Elvis aka Glen Danzig aka DANZIG has come back to Manchester on the 25th anniversary tour (anniversary of just DANZIG) and what makes this concert so much more anticipated is that DANZIG is playing a MISFITS set with guitarist DOYLE WOLFGANG VON FRANKENSTEIN (MISFITS guitarist from 1980 and brother of Jerry Only who is in the ragtag band currently known as MISFITS). The crowd ranged from old metallers/rockers, old and young punks and metal fans from all generations and what they were treated to was a tour de force of a show…unbeknown to some is that the tour also had BLACK SPIDERS as support…

Now I feel a little sorry for BLACK SPIDERS as no one had come for them and although they seemed alright (only caught the last 10 minutes), the crowd were getting all geared up for the man, the legend DANZIG and the anticipation was electrifying the atmosphere at the Academy. DANZIG was due on at 21:00, however after all the sound checks and prepping of the stage the lights dimmed at 21:30 (ish) and then exploded back on with Glen centre stage and the band kicking into ‘SkinCarver’, which was then followed up by ‘Hammer of the Gods’ and that was then the last (and only) songs from any albums after Danzig III. The rest of the show was then made up of songs from the classic ‘Danzig’, ‘Danzig II: Lucifuge’ and ‘Danzig III: How the Gods Kill’ albums and when the opening chords to ‘Twist of Cain’ started after ‘Hammer of the Gods’ the crowd went berserk and lapped up every song that followed and even when he slowed the pace down with ‘Blood and Tears’ it was a welcome relief and the crowd joined along and sang nearly every word.

After the end of ‘How the Gods Kill’ the light dimmed and then DANZIG introduced DOYLE who came on stage with his devilock hairstyle, black neck and arm bands with the MISFITS crimson skull adorning them and his corpse pant with his custom black annihilator guitar and without warning they burst straight into ‘Death Comes Ripping’ and the crowd went mental with the whole place rocking and the pit going mental. DANZIG would introduce each song and it was greeted with cheers and rabid enthusiasm. My only gripe was that the MISFITS set wasn’t longer but I am just being picky and I wish they had played “Horror Business”, “Teenagers from Mars”, “Mommy Can I Go Out and Kill Tonight”, “Braineaters” actually the list is quite long and I suppose they couldn’t please everyone and they played a selection of the biggest and popular songs. (Also DOYLE is massive and ripped…wouldn’t want to get on the wrong side of him!)

The band then left the stage and when they returned for the first encore the crowd was treated to two songs from the legendary Danzig album and one of these was “Mother” (probably his most well known DANZIG song) and the crowd lapped it all up.

He then disappeared again and then returned to play “She Rides” (also from the album Danzig) which the crowd absolutely loved and then DOYLE came back on stage to close the show with the MISFITS classic song “Die, Die My Darling” which sent the Manchester crowd into a ravenous frenzy. Then the light came on and the show had come to a climatic ending which left the whole place buzzing…

Some of the crowd had come solely for the MISFITS set and I think they would have been impressed by the DANZIG songs and just how good the first three DANZIG albums are, to be fair most of DANZIGS albums are classics (apart from Danzig 5: Blackacidevil) but this show was all about early DANZIG and MISFITS, although a SAMHAIN song or two would have been welcomed…but I am just picking now at what was a great gig!!!

Evil Elvis left the building and so did the thousand of fans who were all smiling and sweaty after a great show. 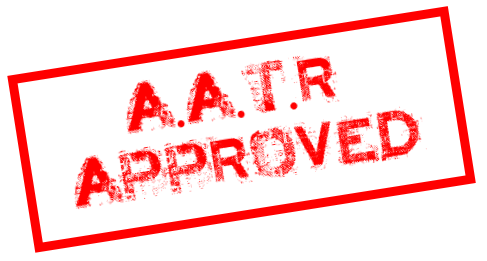