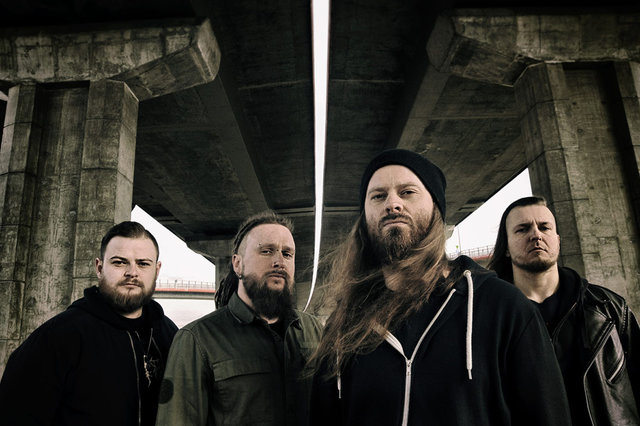 All four members of Polish Death Metal band Decapitated have been formally charged with rape in Spokane County, Washington. The four had already been charged with kidnapping in the first degree.

Last month, a woman said she was gang-raped by all four in the bathroom of their tour bus after an August 31st concert in downtown Spokane. The band were arrested and court documents which were released shortly after the accusations said that the band members – 27-year-old Michal M Lysejko, 35-year-old Waclaw J Kieltyka, 31-year-old Rafal T Piotrowski and 30-year-old Hubert E Wiecek – were arrested on charges of first-degree kidnapping.

The full story about the arrest and court documents is right here.

Decapitated have issued a statement in response to the formal charges which reads:

“We’d like to emphasize; the Spokane Police Department has pressed charges as procedural formality, without doing so, they would be forced to release band. This is not a conviction or any indication of guilt or innocence.

“Once again, we ask that everyone wait for each party’s case to be presented and await the court’s decision. With that said, whilst cases are being prepared on both sides, some facts are indisputable at this point — that the original officer who took the complaint from the accuser stated, ‘I do not have probable cause that a rape occurred,’ and it’s taken a full thirty days to file charges, which is right up against the point at which the defendants would legally have had to be released.

“The band firmly refutes the allegations and are confident that once the facts and evidence have been seen and heard, they will be released and able to return home.

“Individuals who were present on the night in question with information about the case are asked to reach out to the defense lawyer, Steve Graham of Spokane, Washington.”

The rape charges vary between the four, from second degree for singer Piotrowski and guitarist Kieltyka, to third degree for drummer Lysejko and bassist Wiecek.

The Spokane-based attorney representing the band, Steve Graham, told The Spokesman-Review that there is “another side to this”.

“We have witnesses that can testify to the fact that the accuser came to visit the band of her own free will and left on good terms. The accuser has a documented history of providing false information to the police dating back to 2014.”

Decapitated announced last month that they were cancelling all previously announced tour dates.

Previous to that, Venom Prison withdrew from the support slot on Decapitated’s November ‘Anticult’ UK tour, issuing a statement saying “until an individual is convicted, we are not in a position to comment”.

Their statement then went on to say “we don’t believe these things just happen” and effectively said they believed the Poles were guilty, as well as pointing out that they had made a £200 donation to Rape Crisis.

You can read their statement in full right here.

Should Steve Graham’s comments about the accuser above prove to be correct, it will serve to highlight that ‘innocent until proven guilty’ remains a fundamental and vital component of our democracy.