Universal Music are pleased to announce the release of a very special Def Leppard release for Record Store Day 2022, on the 45thanniversary of Def Leppard forming in 1977.

Def Leppard’s seminal album “High ‘n’ Dry” will be released as a picture disc, for the very first time, on the 23rdApril 2022.

“High ‘n’ Dry”, Def Leppard’s second album, was released in 1981, and was the first album produced by long term collaborator Robert ‘Mutt’ Lange. It was the album that cemented the bands status in both the UK and America. The album contained songs that remain firm fan favourites and staples of the bands tours like “Bringin’ On the Heartbreak” and “High ‘n’ Dry (Saturday Night)”. 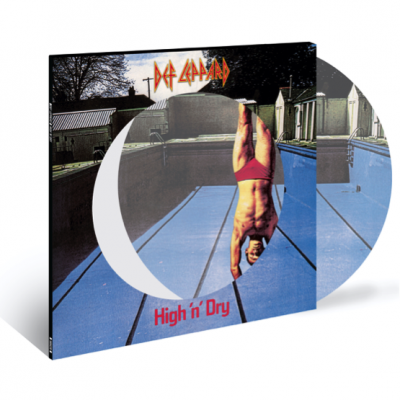 SIDE TWO
You Got Me Runnin’
Lady Strange
On Through the Night
Mirror, Mirror (Look into My Eyes)
No No No

With more than 110 million albums sold worldwide, 5.5 billion streams (despite only putting their catalogue online in 2018) and two prestigious Diamond Awards in the USA, Def Leppard – Joe Elliott(vocals), Phil Collen(guitar), Rick Savage(bass), Vivian Campbell(guitar) and Rick Allen(drums) — continue to be one of the most important forces in rock music. Over the course of their career the band has produced a series of classic ground-breaking albums that set the bar for generations of music fans and artists alike. The group’s spectacular live shows and arsenal of hits have become synonymous with their name, leading Def Leppard to be heralded as an institution in both the music and touring industry.

2022 sees Def Leppard celebrate their 45th anniversary with The Stadium Tour, their biggest North American tour ever. The run will start June through September 2022 and will see the band play 31 stadium shows across the US with Motley Crue, Poison and Joan Jett.