Ready to ignite 2022, Rock and Roll Hall of Fame®-inducted icons and rock music legends Def Leppard have announced their return with a twelfth full-length album, Diamond Star Halos [UMe], releaesd on the 27th May 2022. The announce saw the release of first single from the album, “Kick”, a powerful and rip-roaring new rock track, the song thrusts into an anthemic stadium-ready frenzy kickstarted with driving guitars and bombastic drums woven into its musical fabric.

The single has received widespread critical acclaim globally and has gone straight on to the A list for their homelands largest radio station, the UK’s BBC Radio 2. Universal Music is now delighted to announce the release of the music video to accompany the single. The stunning performance video is directed by Berlin based Anuk Rohde (Rammstein) and is available to see HERE 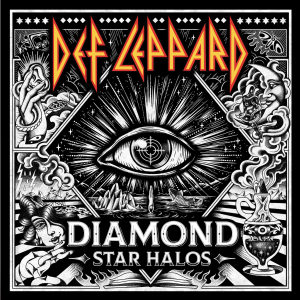 The artwork for Diamond Star Halos is art in itself. The design follows pedigree with their instantly recognizable album covers from their celebrated past. With images by world renowned photographer and director Anton Corbijn, styling concepts by Maryam Malakpour and graphics by the UK based Munden Brothers, the design truly follows the band’s influence through their eyes today.