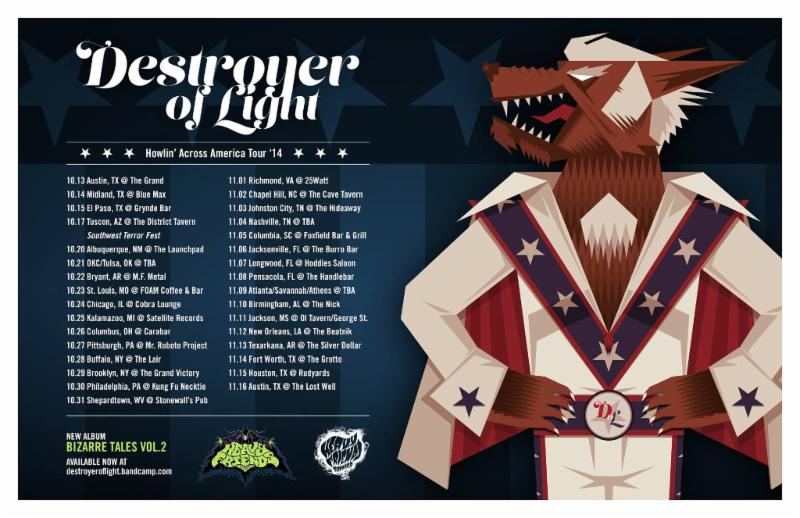 Austin,Texas October 13, 2012 – Destroyer of Light begins its Howlin’ Across America ’14 tour tonight The Grand-Social Club and Billiards Room in Austin, Texas.  The hometown show for the doom ensemble marks the first of 32 dates.  Seattle heavy blues/stoner rock outfit, Antique Scream will also be on tap.

Formed in 2012 from constantly boiling musical cauldron that is Austin, TX, Destroyer of Light has taken a straight forward approach to tempering the disparate and harmonious parts of their influences into a total sum of slow motion tidal heaviness that bows to no altar but that of the riff. With the smoky flavors of hazed out doom and the stomping cadence of rock’s heyday, the band both tickles and deafens the ears with the theatrical flashes of Mercyful Fate, the ominous tones of Electric Wizard, and the ferociously feral feedback of a Sleep dirge. Having released a self-titled EP and a live recording, Destroyer of Light hit the road and spread their interpretation of the heavy gospel all across the U.S. before hitting the studio in late 2013 to record their newest EP, entitled ‘Bizarre Tales Vol.2’. Released in January 2014, this sophomore effort was called “The perfect sludge/stoner/doommetal album for Halloween” by The Sludgelord, this most current release has taken Destroyer of Light to new towns and cities along the road they call good times and the love of music. As the fall of 2014 approaches, the band will be on tour throughout October and November in the midst of writing new material for their third recording.

Like zombies moaning for brains, the critics can’t get enough of Bizarre Tales Vol. 2.  Heavy Planet.net describes the band’s sound as “Blending Candlemass wail with well placed death growls, Destroyer of Light bridge the gap between traditional metal and the more extreme sub genres.“ Referring to the song “Forbidden Zombi Ritual,”  Doomantia.com ghoulishly exclaims, “I was seriously expecting to look off my balcony and see the dead rising from the ground ready to chew on flesh!”  “This is the perfect Sludge/Stoner/Doom Metal album for Halloween,” positively states The Sludgelord.