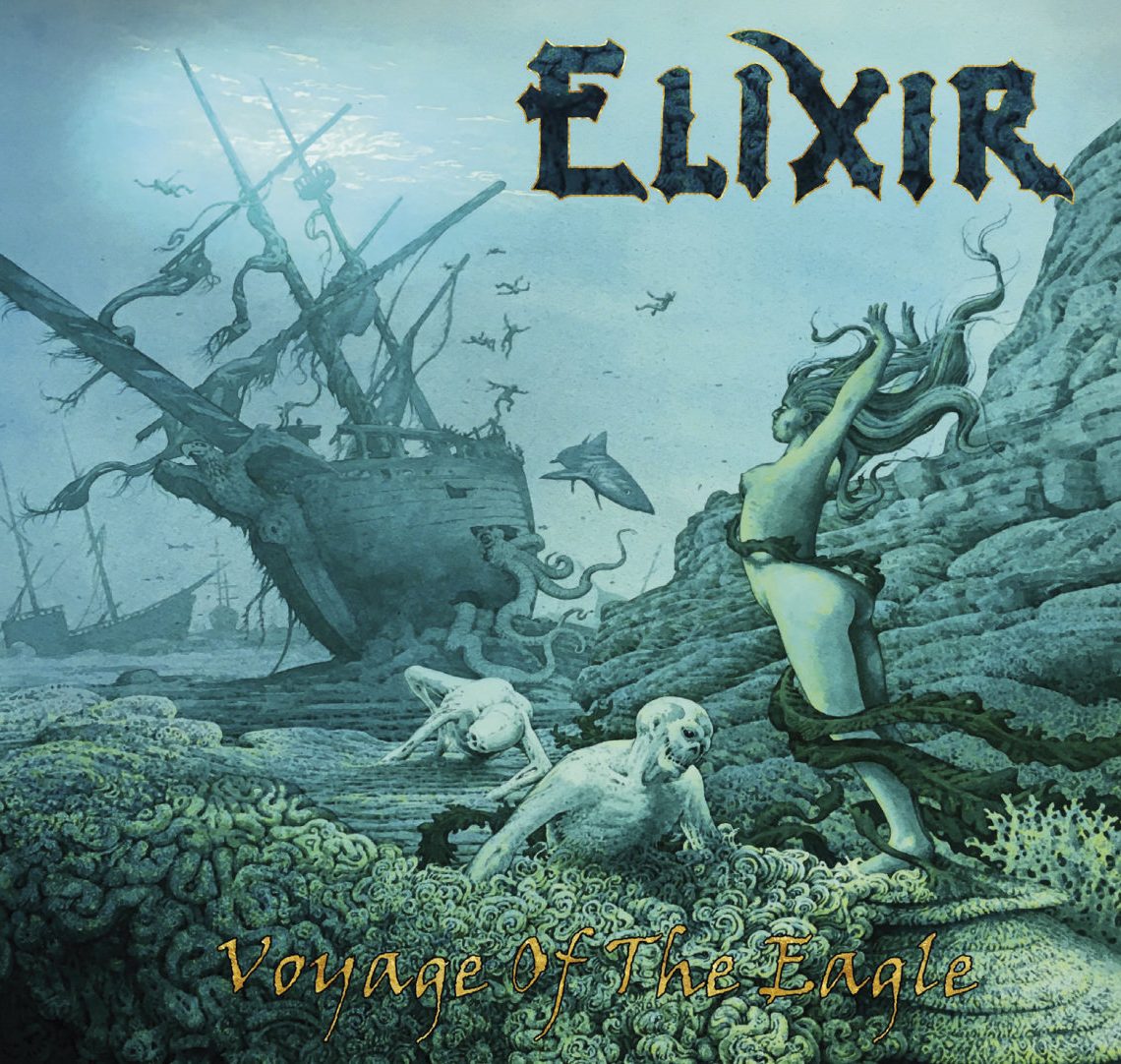 Elixir feature four of the original line-up that created the highly acclaimed ’The Son of Odin‘ album, voted one of the “Top 20 Power Metal Albums of All Time” by Terrorizer Magazine in November 2005, and was named ’Classic Album of the Month‘ in April 2010‘s edition of Sweden Rock Magazine.

The early demo recordings created a lot of interest in the band throughout the World, and secured their first gig, supporting Tokyo Blade in London, on January 4th 1985.

Elixir toured extensively throughout the U.K. in 1985, pausing only to release their first single, the now highly-collectable “Treachery (Ride Like The Wind)”, in July.

The positive response the single received, particularly from Ronnie James Dio‘s review in Kerrang! No 99, boosted the band‘s profile.

In January 1986, the band recorded their self–produced debut album, “The Son of Odin”, at the Lodge Studios.

In February 1986, the band was invited to record 4 songs for B.B.C. Radio 1‘s Friday Rock Show, hosted by Tommy Vance.

In July 1986 the band released “The Son of Odin” on it‘s own Elixir label. With help from rave reviews, the album soon sold out it‘s initial pressing, proving popular throughout the World and becoming a collector‘s item.

In 2001, with “The Son of Odin” album still being much sought after amongst Heavy Metal fans, Phil is contacted by the Cult Metal Classics label, with a view to re-releasing the album on CD.

The band agree to the release and also re-form to record a follow up self–produced album entitled “The Idol”.

“The Son of Odin” was re-released in November 2001, and is cited as one of the best releases of the year by Mikael Johansson in Sweden Rock magazine.

In February 2002, the initial pressing of the CD sold out, confirming that there is still great interest in the band Worldwide after all these years.

In September 2002 Elixir headlined at the Heavy Metal Assault Festival in Athens, Greece, and their triumphant return to the stage went down a storm with the crowd.

With “The Idol”, the band release their first new album in 13 years, on the CTR label on October 31st 2003. Initial response is favourable with Chris Chantler of Terrorizer magazine awarding the album 9 out of 10 points, describing “The Idol”as a “HM masterclass” and stating that “”The Idol” is the best British metal album of 2003.”

Elixir play their first gig in Germany in April 2004 at the Keep It True Festival. The show is a big success, boosting the interest in the band. Following on from their German appearance, Elixir are offered a deal with TPL Records of Sweden to re-release “The Son of Odin” and “Sovereign Remedy” albums, the latter being their second album in it‘s original mix and track running order.
The band are offered several festival slots, and appear at the Headbanger‘s Open Air Festival in Germany in July 2004, and the Heavy Metal Maniacs Festival in Holland in October 2004.

Elixir appear at the Motala Metal Festival in Sweden in November 2005 to coincide with the release of ’Elixir Live‘, the bands first live album, on TPL Records. The band also celebrate ’The Son of Odin‘ being voted in the top 20 Power Metal albums of all time by Terrorizer Magazine (UK).

In January 2006 the band complete work on their new studio album ’Mindcreeper‘ and from it, release the single ’Knocking On the Gates of Hell‘ on TPL Records.

In March 2006 Elixir finalise a deal with Majestic Rock Records, which means that not only will the new album ’Mindcreeper‘ be available through Worldwide distribution and online sellers such as Amazon and Play, but also the complete back catalogue. The band make their first appearances in the U.S.A. in July and finish the year by appearing at the first British Steel Festival in England.

In February 2007 the band appear at the Clive Aid charity gig in London, and perform a cover of the Iron Maiden classic ’Running Free‘ with Maiden‘s original vocalist Paul Di‘Anno.
April 2007 sees Elixir return to the stage for the second British Steel Festival.

Elixir make their live debut in Italy in February 2008, appearing at the Play It Loud Festival.
The band make two live appearances in London in 2008, playing the third edition of the British Steel Festival in April, at The Underworld in Camden, and appearing at the last weekend of live shows at the Ruskin Arms in East London, famous as the venue where Iron Maiden made their name.
In November 2008 Elixir make a triumphant return to Athens to play their celebrated album, ’The Son of Odin‘ in it‘s entirety.

2009 saw the band appear at the fourth edition of The British Steel Festival in London, before taking time out to record and work on new material. The band returned to the stage in November to play the Metalcova Festival in Barcelona, Spain, and in December appeared at the prestigious Hard Rock Hell show at Prestatyn, Wales, alongside such bands as Queensryche and W.A.S.P.

The band worked on their fifth studio album, ’All Hallows Eve‘ through 2010, releasing it on October 31st. Two Italian shows followed in November, before the boys made a return appearance at Hard Rock Hell in December alongside UFO, MSG, Uriah Heep, Saxon and Helloween.

2012 sees the release of the ’All Hallows Eve‘ album in 12” vinyl format in gatefold sleeve complete with giant poster. The band appear once more at The British Steel Festival before founder member and bassist Kevin Dobbs announces that he no longer wishes to continue with Elixir. Paul and Phil form spin-off band Midnight Messiah and record two albums with them.

In 2019 Elixir are asked to re-form to appear at the 2020 MS charity fund-raiser Burr Fest, in memory of late Iron Maiden, Desperado, Samson and Elixir drummer Clive Burr. Kev agrees to appear with Elixir one final time before retiring. Cherry Red label, HNE, release a 3 CD box set of Elixir‘s second album in both it‘s ’Lethal Potion‘ and ’Sovereign Remedy‘ forms, with ’Elixir Live‘ completing the set. Interest in the re-formed Elixir brings in an offer to appear at the 2020 edition of German Keep It True Festival. With Kev‘s blessing, Elixir recruit talented bass player Luke Fabian. With his energy and style, Luke is a perfect replacement to continue Kev‘s legacy. Elixir work on new material, with an album scheduled for release in Spring 2020.

In November 2019, Elixir‘s debut album ’The Son Of Odin‘ is named as one of ’The 25 Greatest Power Metal Albums‘ by Metal Hammer.