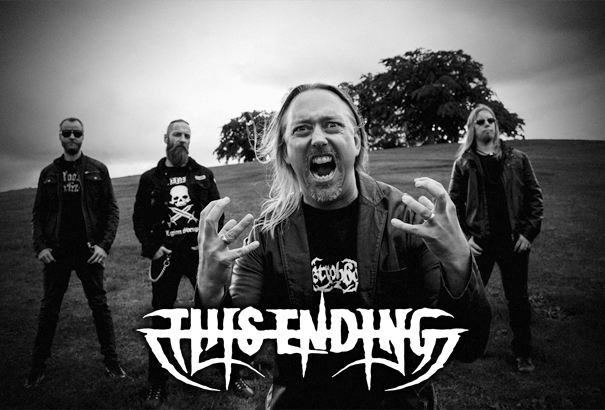 After reviewing their awesome third album, Garden of Death, I had the chance to catch up with This Ending’s legendary drummer Mr Fredrik Andersson! Have a read of our chat below!

All About The Rock: First off, thanks for taking the time to chat to me today! For anyone who isn’t familiar with This Ending, can you introduce yourself and give us an idea of what the band is all about?

Fredrik Andersson: I’m Fredrik, drummer in the band. When we started This Ending we were just about playing together again as we did in the 90’s (Under the name A Canorous Quintet) However, we didn’t want it to be a reunion or nostalgic thing so we wanted a different name. The theme of the songs we had written were kinda apocalyptic, end of the world kinda stuff so we picked a new name ”The Plague”, but after we got a record deal and did some research we found out this name was already taken by many bands so we decided to change. In the beginning we were also into the more mechanical and industrial theme and sound, but with the latest album we’ve actually gone back to our roots a bit and removed most of that to get more room for harmonies and sinister melodies.

AATR: It’s only been a couple of weeks since the awesome Garden of Death dropped! How has the response been so far?

FA: It’s been mostly good I think, I’ve read a few not so good reviews and that’s fine too. People are allowed to have their own opinions and obviously our music isn’t for everyone. But what I think is positive is that those who’s been given us good reviews have pointed out the things we’ve been focusing on and that feels like an accomplishment to us that we succeeded in what we wanted to do.

AATR: I spoke quite a bit in my review of the label about the blackened feel to it – was this black metal influence a conscious shift, or was it just what flowed at the time?

FA: When we decided to kinda let go of the industrial parts and focus more on the melodies I think the blackish influences comes naturally. Historically we’ve always been somewhere in the death/black area. I think that’s what the genre was called before some guys from Gothenburg decided that it should be named after their city.

AATR: And what were some of the inspirations to the album, both lyrically and musically?

FA: As it always has been, it’s about today’s world we live in: all the awfulness and greediness of mankind. Personally I get inspiration all the time, I get melodies in my head constantly and they seem to come from out of nowhere at times, other times from something I hear on radio or TV. It’s mostly Mårten [Hansen, vocals] who writes lyrics and I don’t always know what goes on in his mind, but the themes are mostly dark and twisted. He usually takes things around his own life, experiences, that he re-writes and then uses metaphors to make it fit the music and not being too personal.

AATR: So it’s been seven years since your last full length, and four years since the EP – what was the reason for such a long gap between releases?

FA: The main issue was that we lost two members. Jesper [Löfren, bass] decided he didn’t have time for the band anymore so he stepped away and Leo [Pignon, guitar] just didn’t have time either and we were stuck for a long time in limbo. We didn’t really rehearse since we were just three members and hence we didn’t really write songs either. When Linus Pettersson joined us we started to meet up more frequently and we could start writing new material again.

AATR: And what have you all been up to in that time?

FA: We worked quite a bit on the re-release of our A Canorous Quintet catalogue, did a release called The Quintessence where we remastered all releases and re-recorded a few unreleased songs. We started working on Garden Of Death in 2013-2014 and it was actually finished in early 2015 but it took a year to get it released.

AATR: Garden of Death has gone out through Apostasy Records, instead of Metal Blade this time. Was there a reason you chose to go to a different label?

FA: It was not our choice initially, we got dropped by Metal Blade. I think Dead Harvest didn’t sell as well as they had expected and they also did some changes in their company. We had always dealt with the German side of Metal Blade, but after their re-organization most contact was through the US side and since we weren’t marketed at all over there I think they didn’t see any potential to keep the band.

FA: It’s smaller, more underground obviously. Apostasy is pretty much a one-man company, something he does on his spare time. But we can see the passion and enthusiasm for the music, something that often gets lost when people start to think about the dollars more than about the music.

AATR: Now you are no longer with Amon Amarth, can we expect This Ending to tour in support of the new album? If so, where are you hoping and planning to get to?

FA: We’ve always been willing to play live and tour, but no good opportunities have been presented. It’s difficult for a ”new” band to book a show our tour outside of their country, and even harder for a Scandinavian band as it’s pretty expensive just to leave the country. But our hopes and goals are to do some smaller tours, weekend shows, hopefully some festivals. Since we do this because we want to and not cause we’re dependant on the money from the band we’re fine with breaking even on a show. It’s just fun to play live.

AATR: What does the rest of 2016, and the future, hold for This Ending?

FA: We are still trying to get the word out about Garden Of Death, we think it’s a really good album so obviously we want as many people as possible to hear it. We’re looking into any options to play live, as a support act or just smaller shows. And we’ve also started thinking about a follow up album as we don’t want to wait another seven years until the next album!

AATR: I heard rumours that a few years ago you were planning on re-recording all the A Canorous Quintet material – was there any truth in that?

FA: There was, but we never planned to re-record all the material as that would be a huge project. The Quintessence however has all the albums re-mastered and a few newly recorded songs.

AATR: Are there any up and coming bands in the underground you’re really enjoying at the moment?

AATR: Thanks for taking the time to chat! Before you go, any messages for the fans?

FA: Thanks for your questions and interest in our band. For anyone reading please check out our music and if you like it play it often, ask for us at your local venue. Thanks for your support!