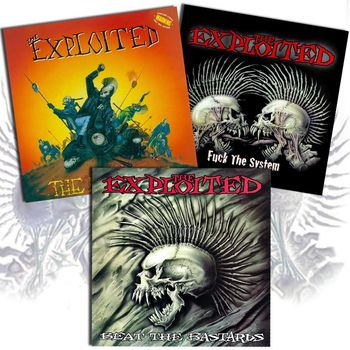 Punk legends THE EXPLOITED have signed to Nuclear Blast and will be releasing their first album in 11 years later this year (hopefully). You see punk legend Wattie Buchan had a heart attack on stage in Portugal on Thursday 13th Feb on the ‘Tour of Chaos’ with HATEBREED and NAPALM DEATH (yes I know we never get tours that great in the UK). Anyway all gigs have been cancelled until May, so this might put the album on the back burner? Been no official word yet, but we wish Wattie all the best and a speedy recovery. However am sure it will take more than a heart attack to put the hard auld bastard down.

Nuclear Blast are reissuing 3 albums before the much anticipated new album. The reissues will come in new digipack cases and include bonus material.

Anyway the first of the 3 reissues is “The Massacre“, now I know a lot of people don’t like this album as this is when THE EXPLOITED started edging more to a thrashy hardcore punk sound. It had been creeping in on previous albums but really made its mark on “The Massacre“. That said though this album still includes a lot classic THE EXPLOITED songs such as ‘The Massacre‘, ‘Sick Bastard‘, ‘Porno Slut‘ (still a live favourite), ‘Don’t Pay The Poll Tax‘ and ‘Fuck Religion‘. The album doesn’t sound like it has been remastered (already had all the reissues on CD) and all Nuclear Blast seem to have done is repackaged the album in a digipack case and added four tracks. The extra four bonus tracks are ‘Barry Prossit‘, ‘Don’t Really Care‘, ‘Power Struggle‘ and ‘Scaling the Derry Wall‘. Now these four tracks are all off the album “Death Before Dishonour” which is quite hard to find so am led to believe. As per ‘The Massacre‘ reissue these tracks don’t seem to have been remastered.

The 2nd reissue is ‘Beat the Bastards’, this album showed THE EXPLOITED take the more thrashy hardcore sound that was heard on previous album “The Massacre” to the next level. A lot of fans don’t like this album as the punk sound is pushed right to the bottom of the mix and another criticism is that at 52 minutes some of the songs just sound like a barrage of noise and similar to each other. However when THE EXPLOITED do get it right on the song then they are absolutely amazing hardcore thrashy punk at its best with all the angst and aggressive of the three genres mixed together. This is highlighted in fan (and live favourite) “Fightback” which has to be one of the best THE EXPLOITED songs ever…period…!!! Other highlights of the album are “System Fucked Up” which is reminiscent of earlier albums but with an injection of metal that wouldn’t be out of place on a S.O.D. or SUICIDAL TENDANCIES album. With the reissue the baffling thing is that I was expecting you to get 4 tracks from the album “Death Before Dishonour” and therefore getting that album spread across the three reissues?!?!?! No…instead you get a live DVD of THE EXPLOITED in Petersburg 2005, I’ve not seen the live DVD put I’ve seen them live numerous times so I expect it to be the same high energy performance of old and new classic but minus the sweat and blood!

The last reissue to be released is THE EXPLOITED‘s last album ‘Fuck the System‘, this album has long been out of print so if you missed it first time around the good people at Nuclear Blast have made it available again for you! This album captured the earlier punk sound and adds in the thrash and hardcore elements better than ‘The Massacre‘ and ‘Beat the Bastards‘ did. This album is also a whirling vortex of punk anger and pummels you senseless in the 34 minutes and leaves you wanting more, if the opening of ‘Fuck the System‘ doesn’t let you know what you’re in for then you must be as dumb as you look! You get 40 seconds of a man screaming in pain before the musical barrage attacks…this is THE EXPLOITED back to their best…!!! Also the cover of ‘Holiday in the Sun‘ pisses all over the original SEX PISTOLS version. The 4 bonus tracks are ‘Adding to their Fears‘, ‘Death Before Dishonour‘, ‘Driving Me Insane‘ and ‘Pulling Us Down‘ which are from the album “Death Before Dishonour”.

If you’re an EXPLOITED fan already then these reissues will probably be useless to you unless you’re a completest in which case you will probably pick them up. However if your new to THE EXPLOITED then I would recommend picking these up and giving them a twirl to see what angst and aggression you have been missing out on. My only criticism is that THE EXPLOITED need to get a sense of humour in the songs every now and again, only so much social and political angst you can listen to… 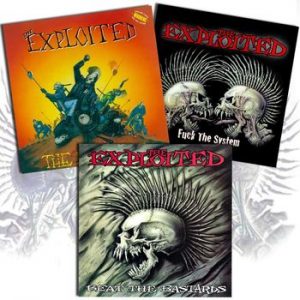 Death – Leprosy to be remastered and reissued