The band has gone from strength to strength, after many critically-acclaimed live gigs. “Meet the British Rockers conquering the planet, one town at a time!” proclaimed Classic Rock Magazine, whilst Rob Evans of Power Play Magazine praised them as “One of the finest live bands I’ve seen this year.” 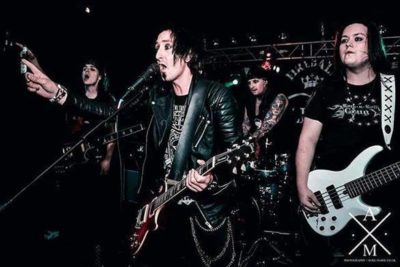 Falling Red always forge a distinctive sound. This strongly influenced their approach to their latest album, ‘Lost Souls’, to be released on 16th March, 2018.

“We went into ‘Lost Souls’ with a total clear head, aiming to just write what we like, not writing with a certain theme or sound, as we have in the past,” explains Dave Sanders, “We’ve got pop radio-friendly tracks, Glam/Sleaze tracks, ballads and heavy metal tracks, but all done in a way that still has the Falling Red edge and tone.”

For this album, the band deliberately changed their approach to recording and production. “We went a totally different way around,” says Andrew, “All our previous recordings were done with Matt Ellis at Axis studios in Doncaster (The 1975) and mastered by Pete Maher (The Killers, U2, Katy Perry)

“This time, we wanted to be more hands on and work our own way, so Dave recorded all the drums with Mark Broughton & Dean Thompson at Blast Studios in Newcastle while all the guitars & vocals were recorded by James Stephenson at Stymphalian Productions in York. In the past, James has worked with Alestorm and we were put on to him by a friend. We heard his work and instantly knew he was the guy for us. After talking back and forth, we started laying the record down and it has worked out really well. The product is a big step up from records we’ve previously released.”

Taking ‘Lost Souls’ out on the road, Falling Red are also pleased to announce their latest touring dates, launching their new material and consolidating their reputation for exciting live performance. 28th October will see the band return to the Brickyard for the first time in 2 years, to launch the new album, with other venues following (as listed). 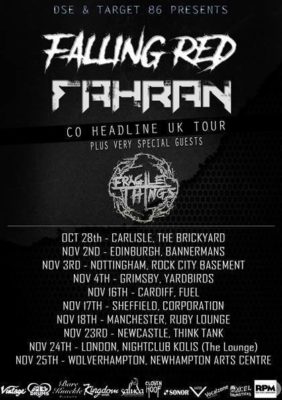 Sparzanza brings Hollywood to their hometown Karlstad in Sweden, paying a tribute to the upcoming movie Blade Runner 2049 on ‘Announcing the End