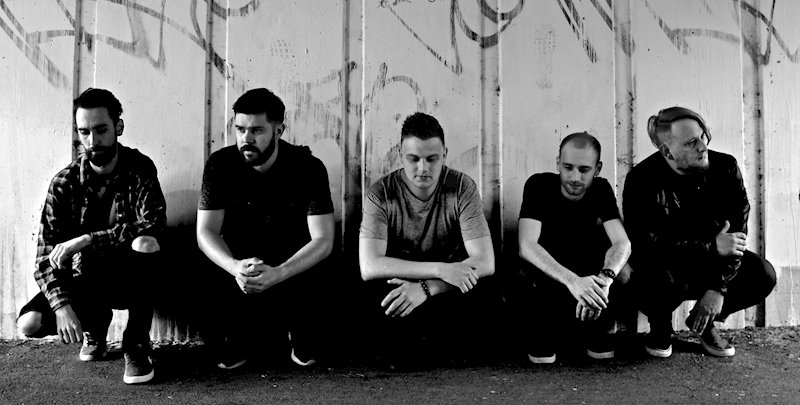 5-piece melodic metalcore outfit Transients are sharing their powerful new video ‘Burn’ from their forthcoming ‘Enemies Within’ EP to be released 26th February 2019.

‘’‘Burn’ is probably one of the more simple narratives on the EP for me,” admits vocalist Joe Knipe, “It’s pretty much just a hate song. If you listen to the lyrics, it’s a direct commentary on my personal feelings towards the political landscape in our country. We’d honestly be better off burning it all to the ground and starting again. Metaphorically speaking.’’

The fast-cut video captures the rebellious anger of the band. Watched from above and afar by an aloof, sharp-suited, superior young man, Transient perform in an island of fast-shifting light and colour amidst haze, darkness and shadow. Colours wash the scene: rich, golden yellows; shadowy deep blues. But as the anthem of rage unfolds, the suit finds himself right in the midst of the action: surrounded and overpowered by Transient’s driving energy, as the lights change to fiery, apocalyptic red…

It’s brutal, adrenaline-pumping stuff, fully in keeping with the rebellious ethos of a band who describe themselves as “brutally honest and cynical of the society we live in. Transients is the amalgamation of a desire to incite raw emotion through sound and a belief that nothing should be left unsaid.”

Transients are on the rise. After spending 2018 writing and recording behind closed doors, they suddenly emerged with ‘Dark Days.’ This proved only the beginning: Transients entered 2019 armed with a six-track EP – ‘Enemies Within’, due for release on 26th February 2019. , The band will then head for a headline hometown release show in Reading on 8th March 2019, along with a spot on the 5th anniversary of Breaking Bands festival and have just been announced to play HRH Metal February 2020.

Joe Knipe explains the EP’s underlying theme: ‘’‘Enemies Within’ is centred around two main aspects: facing and overcoming inner struggle, and addressing social and political issues within our society. We wanted to create a body of work that had a message which reflects the current times.

“For me,” says Joe, “it was a need to express my feelings about everything that’s going on in the world. I guess that’s where a lot of the political lyrics came from… just a need to vent.

“On the other hand, we also wanted to talk about the experiences we’ve been through, in the hope that it might help someone in a similar set of circumstances.’’

Feel the ‘Burn’! And check out this dynamic band with the new video, the ‘Enemies Within’ EP and their upcoming live appearances.