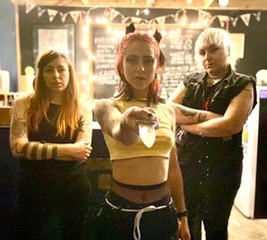 New Heavy Sounds is stoked to invite you to sample the sonic mayhem of punk trio Shooting Daggers. Sal, Bea and Raquel are a visceral amalgam of hardcore punk, riot grrrl and metalcore. They describe themselves as a feminist punk/queercore outfit who cite their influences as bands like Gouge Away, G.L.O.S.S, Turnstile and Gel.

Quite frankly whoever they’re influenced by, Shooting Daggers’ no holds barred sound and approach is all their own, and really knocked us sideways when we heard it.

For those who can remember, Daggers recall classic elements as well. Think fat grunge licks, speeding ‘SST band’ riffs, and the artful and political angst of DC Hardcore and all with the coolest of melodic hooks.

Not only that, Shooting Daggers are just as fierce and committed in what they believe in as how they play. Their lyrics speak about the injustices that Queer, and Women face in a cis men’s world (and in the music industry) and also animal liberation. And although they are a relatively new band, they have already shared the stage with the likes of Guilt Trip, Pupil Slicer and Petrol Girls as well as lending support to animal welfare groups and helping to keep diy spaces and venues open.

1 minute and 52 seconds of punk fury, spit and vinegar vocals and ferocious riffs.

Here’s what vocalist and guitarist Sal has to say about it.

“Manic Pixie Dream Girl is about the movie trope from the same name. It’s a stock character that has no discernible inner life. It’s usually a cis woman that only exists to make the main character (usually a cis man) look good and to provide the protagonist important life lessons. The MPDG trope also occurs in real life, at least in my experience. I personally felt like a MPDG in my romantic relationships and the lyrics are the words of a manic pixie dream girl if she could actually be heard. Claiming that she is someone and stating how bad it feels to be nothing else but someone’s sexy stooge.”

Alongside ‘MPDG’ you have ‘Missandra’ as a bonus track free when you buy the single. Spread over 3 minutes, but just as immediate and just as powerful.

“It is about deconstructing the concept of Misandry. Misandry is not discrimination, misandry is a healthy reaction to oppression”

This first single is a full on statement of intent, musically not just content to career from A to Z, but with enough twists and turns to take you on a short but thrilling journey. It is without doubt proper punk rock, shit kicking UKHC shorn of vacuous posturing. Possessing a message, an attitude and ’in yer face’ excitement in spades.

‘Manic Pixie Dream Girl/Missandra’ will be released digitally and available via the usual suspects on all digital platforms.

HOWEVER, alongside this there will be a very limited run of Flexi Discs.

250 only, each containing both tracks, plus a fold out insert, A4 poster, sticker and badge, not to mention a full download.

The whole shebang is out today via New Heavy Sounds

Be sure to get yours as these will fly. Order now: