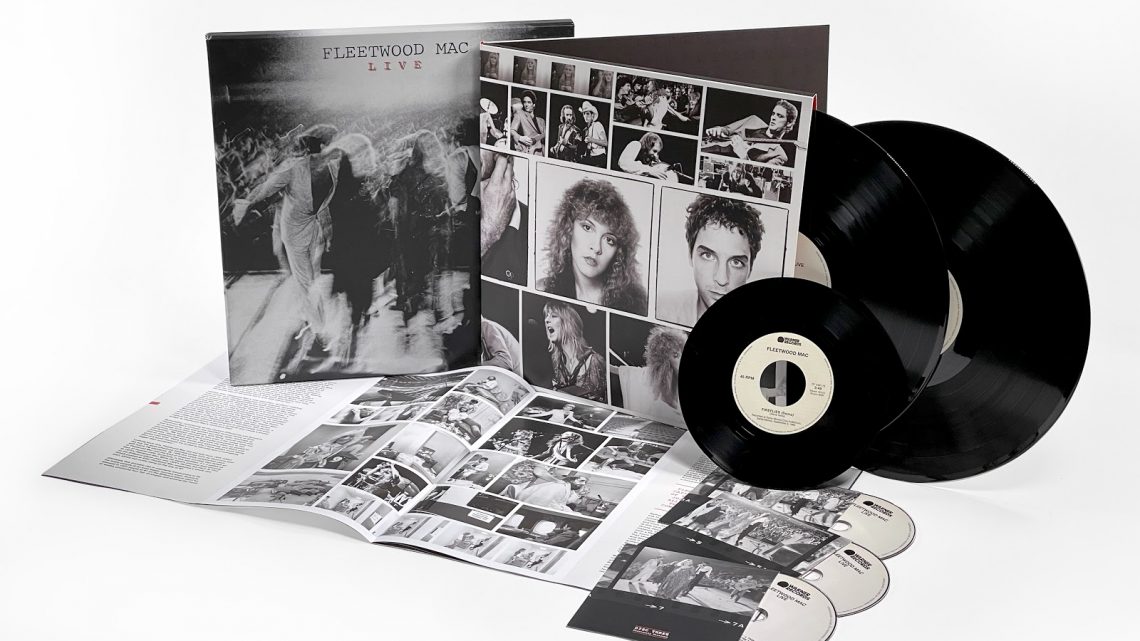 FLEETWOOD MAC LIVE RETURNS FOR AN ENCORE ON APRIL 9

3-CD/2-LP Super Deluxe Edition Includes A Newly Remastered Version Of The Classic Double Live Album With More Than An Hour Of Unreleased Live Music. Plus Unreleased Demos For “Fireflies” And “One More Night” On Bonus 7-Inch Vinyl.

When Fleetwood Mac released its first live album in December 1980, it captured the legendary band’s most iconic lineup on stage demonstrating the full scope of their collective, creative powers. Recorded mostly during the world tour for Tusk, Fleetwood Mac Live delivered a double-album’s worth of exhilarating performances that included massive hits like “Dreams” and “Go Your Own Way,” “Rhiannon,” and “Don’t Stop.”

Rhino gives the band’s live debut a much-deserved encore with a new 3-CD/2-LP collection that features a remastered version of the original release on both 180-gram vinyl and CD, plus more than an hour of unreleased live music recorded between 1977 and 1982 on the third CD. The set also includes a bonus 7-inch single featuring previously unreleased demos for “Fireflies” and “One More Night.”

FLEETWOOD MAC LIVE: SUPER DELUXE EDITION will be available from Rhino on April 9. An unreleased live performance of “The Chain” recorded in Cleveland in 1980 is available today on all digital download and streaming services. Click HERE to listen now.

This Super Deluxe Edition is presented in a 12 x 12 rigid slipcase and comes with a booklet filled with rare photos, a full itinerary for the Tusk Tour, plus a history of the live album by writer David Wild. He writes: “Then and now, Fleetwood Mac Live artfully marks a fascinating time period for a group that, in one form or another, has been on the global stage for more than half a century… It’s a wildly entertaining rock ’n’ roll circus in full swing under a big tent of the band’s own creation as they leave audiences dazzled in locales from Paris, France, to Passaic, New Jersey.”

The majority of the original album was recorded live between 1979 and 1980, save for a few exceptions:  “Don’t Let Me Down Again,” was recorded in 1975 during the tour for Fleetwood Mac; Dreams” and “Don’t Stop” are from the band’s sound check in Paris; while “Fireflies,” “One More Night,” and a cover of the Beach Boys’ “Farmer’s Daughter” were all recorded in California during a special show for the band’s crew, family, and friends.

The 14 live tracks that debut on the Super Deluxe Edition span a wider range of time than those on the original release. They include seven songs from the Tusk tour (1979-80), four from the Rumours tour (1977) and three from the Mirage tour (1982). These stellar additions include live versions of “Tusk,” “Gold Dust Woman,” and “Songbird,” plus “The Green Manalishi (With The Two-Pronged Crown)” – a song written in 1970 by guitarist Peter Green, who founded Fleetwood Mac with Mick Fleetwood and Jeremy Spencer in 1967.

“Say You Love Me”

“Don’t Let Me Down Again”

“Go Your Own Way”

“What Makes You Think You’re The One” *

“The Green Manalishi (With The Two-Pronged Crown)” *

LP One: Side One

“Say You Love Me”

LP One: Side Two

LP Two: Side One

“Don’t Let Me Down Again”

“Go Your Own Way”