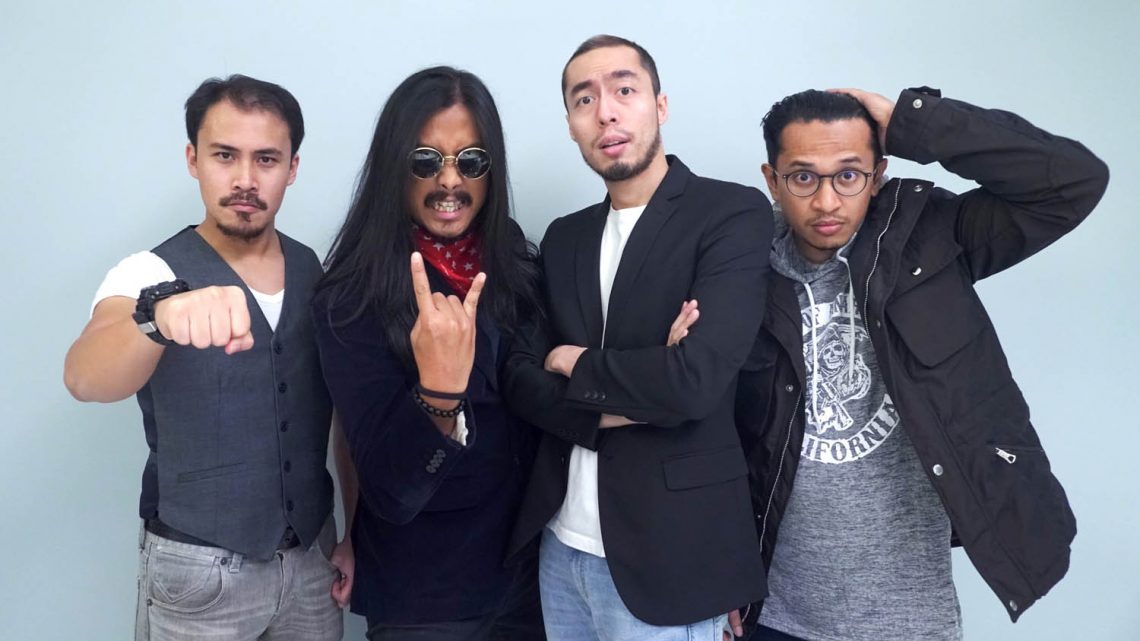 Shadow Puppet Theatre, (or ‘SPT’ for short), are a 4-piece Malaysian rock band based in the city of Kuala Lumpur, named after the beautiful and ancient art of shadow puppetry. In keeping with their chosen name, they meld both storytelling and what they call “the feels”: an indefinable element adding a special ‘sparkle’ of life into each, and every, musical note they play. Their music cannot be pinned down to one genre but, as their name suggests, like ‘hidden puppeteers’, they skilfully create music that takes their fans through a magical journey through “Funk, rock and everything in between.”

Their latest single is the wonderfully cyber-noirish tale of a lone avenger fighting corruption – ‘Codename Summer’- which will appear on their next album. We chat to frontman Dzul :

Your new single “Codename Summer ” is quite funky melodically but the lyrics are humorously dark, tell us about the song narrative.
The song is about a low key nice fellow who is also an altruistic hacker, and he really wants to rid the world of corruption and abuse of power. One way of describing this would be the Imaginary child of the series “You” and “Mr. Robot” starred by Henry Cavill.
Can you tell us some of your musical influences growing up and also now?
Personally I grew up listening to music from Metallica, Nirvana, Muse, Guns N Roses, RHCP, and whatever was up on MTV back in the day, even the pop stuff, the boys have different tastes though.
Ah yes, the good ol days when MTV used to play music videos.
SPT famously broke a Guinness Word record in a plane: tell us about that!
This gig was for the Malaysia Book of records. So we played an acoustic gig at 38,000 feet in the air with one guitar and a cajon (Jamiroquai did 35,000 feet and The black eyed peas did 41,000 feet ) . It was super fun as the audience didn’t know we were going to perform so it was a pleasant surprise for them so it was hands waving and a sea of mobile phones in the air.
Wow, that must’ve been so cool.  Of course it’s almost rude NOT to out do Jamiroquai.
The album ‘John Doe’ came out a few years ago now- what was the reaction to it?
It was pretty well received, with ROTTW magazine reviewing it as one of the best albums of 2018.
We hear you are working on a new album. Do you have a name for it yet and will there be a ‘theme’ to it?
We have some ideas for the names, but nothing final as of yet. Thematically
it would be life, love and loss.
How has the Pandemic impacted you personally and also as a band (apart from not being able to tour)?
Personally I’ve had to battle some mental health issues due to being locked down and isolated, and it didn’t help that as a band we were not able to play together and practice, but on a creative note the song Doctor was inspired by this downtime. The general upside to this was a lot of learning and recording behind the scenes so we could still do some writing and production.
Lockdown really has messed with alot of peoples mental health (mine included) thankfully the world is starting to open up as we learn to live with this virus finally.
Can you recommend a band, or bands, that you have listened to lately?
To be honest, lately I’ve been listening to older material, like Elton John, Seal, Queen, makes for a bit more easy listening these days, great lyrics too.

That’s certainly an eclectic mix, just like your music.
Many thanks for your time Dzul, it’s been a pleasure