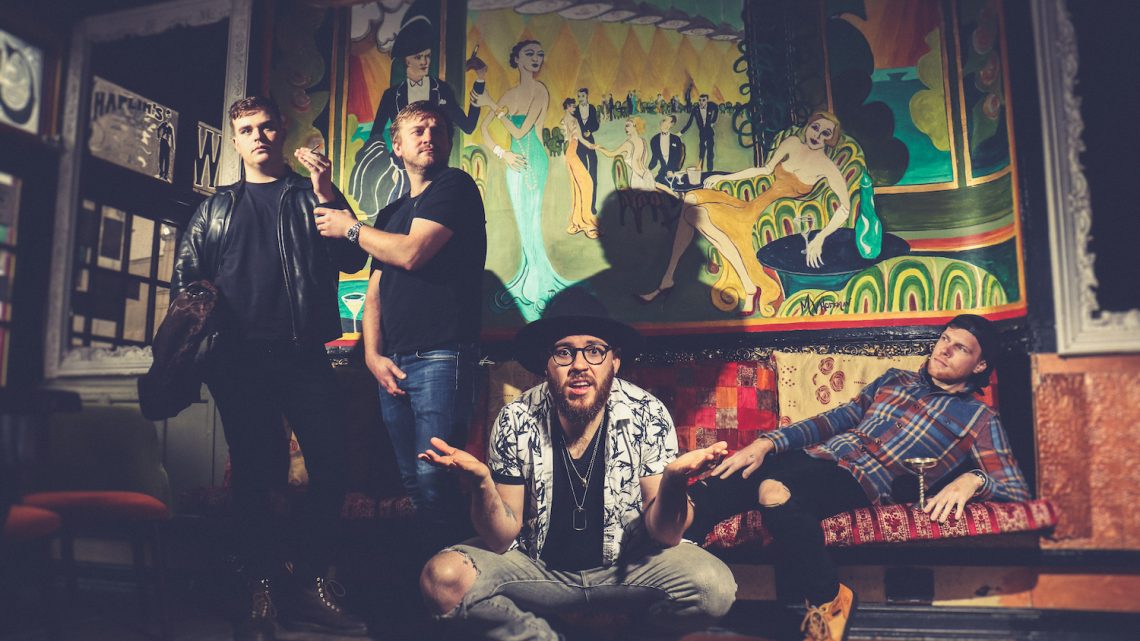 2nd February 2021 0 By John Deaux
Skinny Knowledge are a 4 piece alternative rock band from Brighton. They’re due to drop their 1st album in March 2021 We managed to catch up with Andy for a chat about Lockdown 3.0 and his dogs. 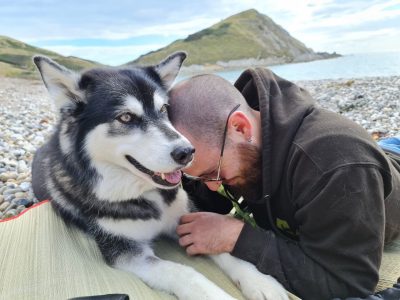 They’re my fiancée’s dogs, but we’ve been together 3 and a half years now, so I class them as my own children now! Jaz got Mika as a 6 month old pup, and she rescued Titan when he was 2. Titan was living in Ireland, and abandoned but thankfully found his way to our home.

What is the weirdest thing your huskies have done?
Hmm, that’s a tough one, as dogs do weird stuff all the time… They both have strange characteristics, which I guess comes under weird… Mika loves to sleep upside down, even though it makes her sneeze every single time. She’s also insanely demanding, i.e. if you stop stroking her, she’ll reach for your arm, and literally put your hand back on her fur! She’s also an escape queen, and will get into all sorts of mischief.
The worst being last summer, just before we were meant to road trip around the UK (we had to cancel for her), whilst we were all out the house, she decided to jump out our 1st story bedroom window, landed on our brick wall outside, almost killed herself and went to doggie hospital (yes, I know they’re called vets…). Would it stop her next time? Absolutely not. 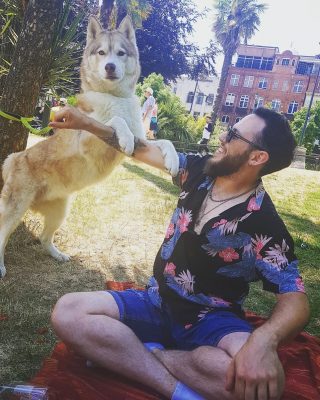 Titan on the other hand, is a super laid back, old guy. He’s happily sit on our bed all day long and not move. Until it’s 10pm and he’s hungry, and he becomes a troublesome little sod! He also loves to sing f you say ‘come on’ in a high pitch voice. I imagine people walk past us and think we’re super weird…

Have you managed to do any obedience training with your huskies?
Huskies are renowned for having no obedience. I think ‘sit’ or ‘paw’ is probably the best we can get, and even that sometimes is a struggle!
This past year with furlough and lockdowns has a td challenging. How have your dogs helped being at home for you?
Our pups are getting a bit older now, so they’re pretty chilled out. It’s been a nice excuse to get outside and walk though. Without them, it’d be a lot harder to motivate yourself to leave the house. They’d never me nuts though, they’re so sweet and calm (most the time)…
Have you always been a dog person?
I’ve always been a dog person, as my family had two Labradors whilst growing up, so I’ve always been around dogs. I’m not so much a cat person, I just don’t like how independent they are. They leave your house and you just hope they come back! I also find it hard to read a cat, whereas a dog, I can most of the time tell how they’re feeling.
Have you ever owned any exotic pets?
I had some goldfish, which are pretty exotic, right?! In all seriousness… I’d love to own a snake. I just think they’re stupidly cool, and it’d be ace to just chill out in your lounge with your snake.
Are you one of those people that puts your dogs into costumes?
Never! We occasionally put hats or glasses on them, and take a picture, but I’d never put a full costume on them. To be honest, finding dog customer big enough for huskies would be a tough ask! We did once put cardboard tubes on Titan’s feet… He hated it…
How do they react when you practice at home?
If I’m alone in the house, there’s a chance Titan will come and find me, and sit with me whilst I play (he always likes to be in someone’s company). Other than that, they’re not really fussed unfortunately! They’ve come to see me play acoustic gigs a couple of times, but they always distract the audience away from me so it’s not always a good thing!
Who looks after the huskies while you’re away?
Our house mate is normally really good at looking after them if we go away, but, we rarely go on holiday! It’s not very often I allow myself to have time off! If we were to tour though, I’d bring them with me. We’d happily go travelling in a van. We did a road-trip up to Scotland and back last year, and they loved it.

So our debut album comes out on 5th March, which were insanely excited for! We’re hoping to do an album launch show when we’re allowed out of our cages to play… We haven’t really focused on any more writing just yet, all in good time though…

Thank you for all the support over the past couple of months since we started! This is just the beginning of our journey, and we’re so excited to share the rest with everyone. Follow us on the socials and keep up to date with the news, and if it’s not for the news, do it for the dogs!

Andy, this has been a blast to do. Thank you for your time.. Give those huskies a hug from all of as at AATR, stay safe and well and we hope to see you on a stage again soon.