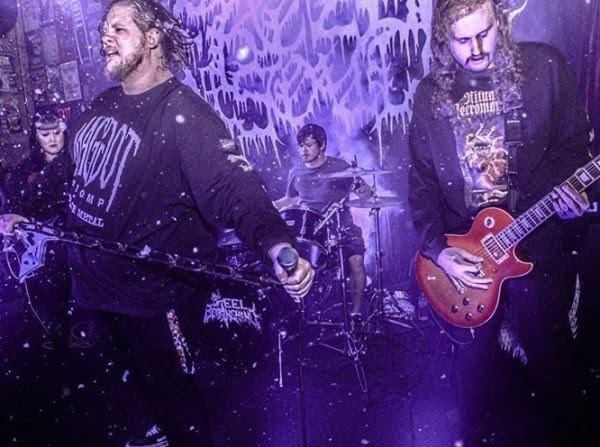 Dallas Texas’ FROZEN SOUL lives up to its name as death metal at its coldest and most classic. Now, having stirred the underground with their four song demo-turned-EP “Encased In Ice” (via California’s Maggot Stomp Records) and a string of unforgettable live shows across the US, FROZEN SOUL have inked a worldwide deal with Century Media Records.

“As I’ve grown and gotten further and further into heavy music, Century Media’s rich history in death metal has played a huge role in developing me as a musician: from Grave and Deicide to Blood Incantation and Skeletal Remains we’re honored to be part of that legacy,” says frontman Chad Green.

Formed in 2018 by Green and guitarist Michael Munday, who were both also handling caveman duties with local bonecrushers, End Times, FROZEN SOUL immediately picked up a buzz for their filthy, raw sounds and atmospheric live show.  Shows opening for Blood Incantation, Gatecreeper, and Obituary helped usher the band into the national light as crowds were left stunned in the band’s icy wake, chilling blue lights and a snow machine addled atmosphere that chilled the Dallas heat. With only their EP to their name, FROZEN SOUL (its lineup now rounded out by bassist Samantha Mobley, second guitarist Chris Bonner and drummer Matt Dennard) hit the road in North America throughout 2019 as well as the dead of Winter 2020, converting crowds much like the march of Game of Thrones’ Night King.

“It was a classic case of hard work and vision paying off”, says Century Media US A&R Mike Gitter. “Their influences are classic, but ugly riff for riff, they set themselves apart by being that much heavier.”Says Century Media head Philipp Schulte: „We are very happy to announce the worldwide signing of FROZEN SOUL from Texas. The band got our attention with their excellent demo release “Encased In Ice” that offers death metal in its most primal form – ferocious, straight and brutal. Bands like Grave, Unleashed and Morgoth laid the foundation to Century Media Records. Teaming up with FROZEN SOUL means to solidify this foundation and to carry the torch of real death metal into the future. We are very much looking forward to releasing FROZEN SOUL’s debut “Crypts Of Ice” in autumn.”Not surprisingly, Brooklyn Vegan named FROZEN SOUL one of the most anticipated metal bands of 2020 and Invisible Orange’s Rhys Williams gave “Encased In Ice” the #4 spot in his Top 10 records of 2019. The band entered the studio with Engineer Slade Williams (“Encased in Ice”) and Producer and End Times guitarist Daniel Schmuck (who has worked with Many of Texas’ heavy underground bands such as Power Trip and Creeping Death) in early March to begin recording their Century Media debut “Crypt of Ice”.  A new ice age has begun. FROZEN SOUL is a fresh blast of death metal at its coldest.FROZEN SOUL line-up:Chad Green – vocals
Michael Munday – guitar
Samantha Mobley – bass
Chris Bonner – guitar
Matt Dennard – drumsFROZEN SOUL online: