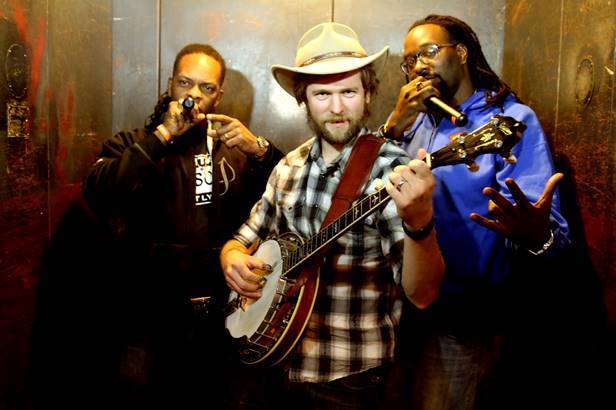 Heads-up for a rare chance to hear one of the most exciting genre-crossing fusions around: Gangstagrass, who’ll be coming to the UK and touring the country between 30th Jan and 10th Feb 2019. They’ll also be releasing a live album to be announced soon.

Gangstagrass combines Hip-Hop and Bluegrass. This fusion is the brainchild of Rench: a Brooklyn-based independent singer, songwriter, and producer, whose roots lie in honky-tonk and hip-hop.

“There are a lot more people out there with Jay-Z and Johnny Cash on their iPod playlists than you think,” as Rench puts it. To prove the point, he’s been recording and touring with a select band of bluegrass pickers and hip-hop emcees, packing out venues along the way.

Way back in 2007, Rench found himself listening to Seventies recordings of Ralph Stanley and the Clinch Mountain Boys and wondered what classic bluegrass would sound like with rap vocals and beats. The result? A genre-busting bombshell called ‘Rench Presents: Gangstagrass’ – a mash-up of local hip-hop emcees and classic bluegrass records. Rench put the material up for free download and folk took heed. Hundreds of thousands of downloads followed, creating a powerful underground buzz.

Gangstagrass went on to catch the attention of the makers of a new TV series on FX, called ‘Justified’. ‘Justified’ hit the screens in 2010, featuring a theme song, ‘Long Hard Times To Come’, which showcased the reworked Gangstagrass, now featuring live bluegrass musicians. The fresh new sound was acclaimed by public and press, and gleaned an Emmy Award nomination for best main title theme music.

Rench then released four albums, with Gangstagrass expanding its range of collaborators from Rap and Country. The band has also toured internationally, with their live show building a rep among fans. The band currently fields two emcees R-Son and Dolio the Sleuth trading verses, Dan Whitener on banjo, and Rench on guitar, and frequent 3-part harmonies. Currently touring the US, Gangstagrass is using live performances to evolve and capture new material for a live album.

Gangstagrass will reach UK shores in January and February 2019. Rench and his crew are looking forward to it: “The UK is a wonderful audience for us, and we find that the country and hip-hop combination brings out an amazing crowd for a party with us. We love meeting people at the shows and interacting with them during our performances which are very spontaneous. When they see a rapper and a banjo player getting down live on stage together the way we do it, the energy really goes through the roof – even people that are familiar with our album recording find their jaws dropping to see where we take it on stage.”

See below for a full tour schedule and book your tickets to see this amazing band.

Find about more about Gangstagrass at their website http://gangstagrass.com. 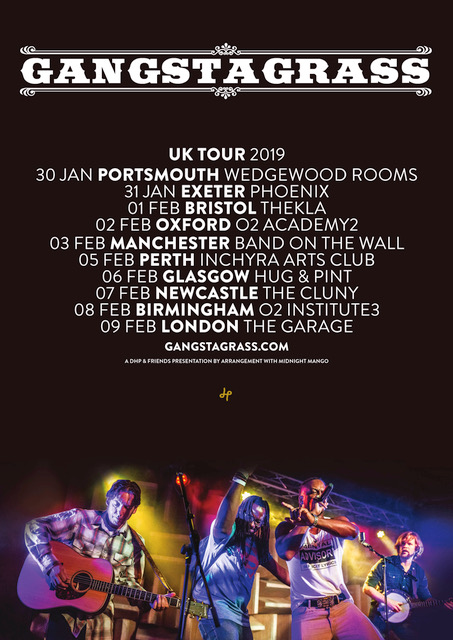