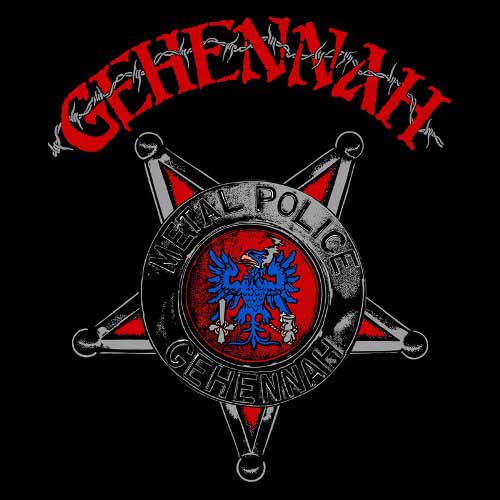 Gehennah the street metal band from the 90’s have sobered up momentarily, signed to Metal Blade and are in the process of writing new drinking anthems for their upcoming 4th album. ‘Metal Police’ was originally released in 2014 as a limited release, however they have added 2 songs recorded from the original ‘Metal Police’ session and have re-recorded 6 songs from their back catalogue. Gehennah have been around since the early 90’s and where originally formed as a Venom cover band, but (thankfully) decided to write their own songs! Gehennah proudly wear their love for Mororhead & Venom on their battle vests (if you don’t know what a battle vest is then you probably won’t like Gehennah). The message of metal, drinking and fighting is evident in the songs Gehennah write and they tattoo this on their fists and then pummel the listener repeatedly.

Gehennah might have been signed by Metal Blade, but they haven’t toned down the violent street metal that we know and love them for. What Gehennah do though on this release is manage to capture the rabid filthy garage sound perfectly, yet found a mix in the production so it doesn’t sound sloppy and garbled. This isn’t a polished pristine production as that just wouldn’t be Gehennah, however they have stuck the right balance and the re-recorded songs definitely have improved since they were originally recorded (and they were classic songs back then). The songs have been re-touched and the guitar sounds are sharper and they sound tighter overall, but keep the vicious pummelling sound of the original recordings. If you’re a newcomer to Gehennah then this release will be a good starting point and if your already a fan then the new songs and re-recordings should have your frothing at the mouth for the up and coming new album.

Gehennah sound is an amalgamation of thrashy riffs, Motorhead styled sloppy rock n roll riffs and the gruff vocals that only years of drinking and smoking can cause (just ask Lemmy). This isn’t an original release or sound, however it is a tongue in cheek slab of filthy street metal. So get your battle vest on, crack open a few cans, but this record on and bang your head. As Gehennah sing on “666, Drunk & Rock n’ Roll”, this just sums them up!!! 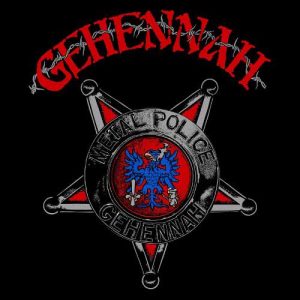 SONGS TO DOWNLOAD – If your already a Gehennah fan then the first 6 tracks, if your new to Gehennah then the following tracks “Metal Police”, “Carve Off Your Face (And Shove It Up Your Ass)”, “Decibel Rebel”, “666, Drunk & Rock n’ Roll”, “Bitch With a Bulletbelt” and “Six-Pack Queen”