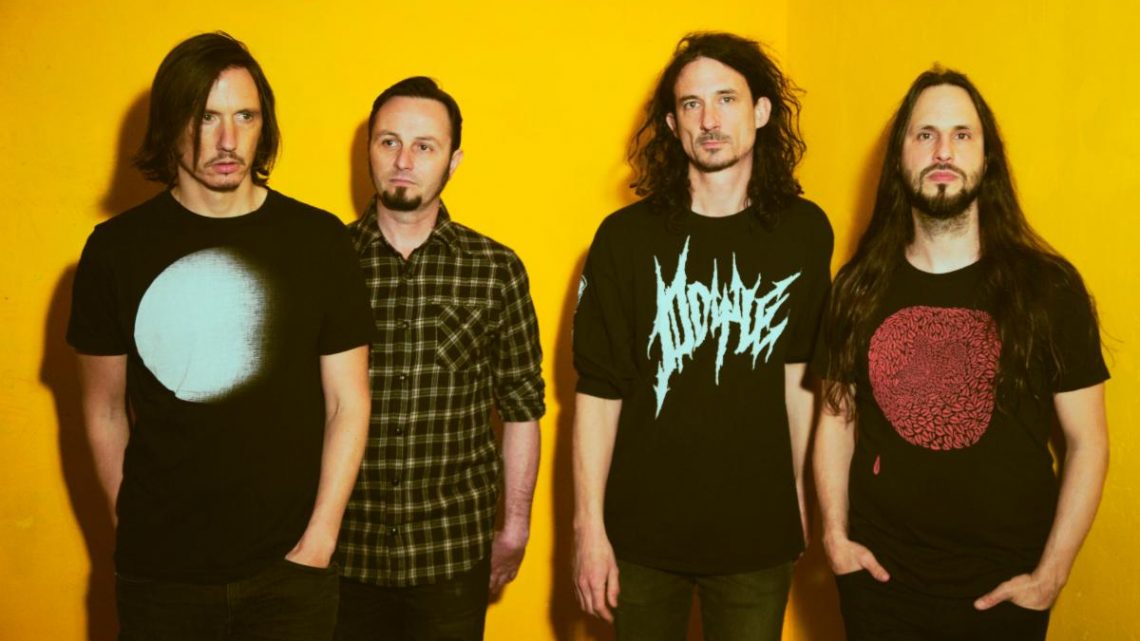 GOJIRA debut ‘Into The Storm’ single; fundraising surpasses $120,000 for APIB

12th April 2021 0 By John Deaux
2x Grammy® nominated band Gojira have unleashed a new track titled “Into The Storm.” It stands out as the fourth song shared from their widely anticipated new album,FORTITUDE, which will be released April 30th via Roadrunner Records [album artwork / tracklist below]. “Into The Storm” is available today on all streaming platforms and is accompanied by a visual streaming now on the band’s official YouTube channel.
Vocalist / guitarist Joe Duplantier elaborated on “Into The Storm” remarking, “This song is infused with the concept of civil disobedience. Acting accordingly with our deepest wisdom and standing for what is precious and good in this world. The only possible revolution is the one that blossoms from within us. Change will come from individuals. Laws are meant to be bent and shaped to our vital needs. LAWS WILL FOLLOW!”
“Into The Storm” arrives in the wake of the band’s recent single “Amazonia” which takes aim at the crisis impacting the Amazon and its indigenous communities. A lush ripper interwoven with indigenous folk instruments and groove-metal rhythms, the soundscapes skew verdant, but the themes prove anything but idyllic. Vocalist / guitarist Joe Duplantier surveys the endangered rainforest, concluding: “The greatest miracle / Is burning to the ground.”
Alongside “Amazonia,” the band launched a fundraising initiative to benefit the indigenous owned NGO The Articulation of Indigenous Peoples of Brazil (APIB) who advocate for environmental and cultural rights of indigenous tribes in the Amazon who have suffered immensely – victims of land loss, forced labour, and poverty. “We don’t want to just release a song called ‘Amazonia’—we want to do something on top of that,” Duplantier explains. “We feel a responsibility as artists to offer a way for people to take action.”
Working with the social good-focused digital platform Propeller, Gojira are curating a month-long charitable campaign featuring an auction of one-of-a-kind items from the band and their friends, as well as a raffle were fans can donate to be entered for a chance to win a hand customized signature Joe Duplantier guitar. Having already raised over $120,000 to date, each week new pieces of memorabilia are added to the auction with recent items including: a snare drum from The Deftones’ Abe Cunningham used in the recording of the band’s debut album Adrenaline, a painting from Slipknot’s Jay Weinberg, an autographed bass used by Justin Chancellor from Tool, a signed book from Metallica’s Kirk Hammett and more. To see the current auction listings, visit propeller.la/gojira. Furthermore, Gojira have also launched a limited-edition art print to benefit the APIB, which is available at http://gojira.lnk.to/poster.
“Into The Storm” and “Amazonia” follow the album’s lead single, “Born For One Thing,” which arrived in February accompanied by a Charles De Meyer directed official music video shot in France and Belgium. All three tracks are available as instant rat downloads with pre-orders  of FORTITUDE – Gojira’s first album in five years and the follow-up to 2016’s Grammy® nominated LP MAGMA.
Recorded and Produced by Joe Duplantier at Silver Cord Studio – Gojira’s Ridgewood, Queens, headquarters – and mixed by Andy Wallace (Nirvana, Rage Against The Machine), FORTITUDE is a collection of songs urging humanity to imagine a new world—and then make it happen. The band initially laid the foundation for FORTITUDE last year with the surprise release of the 2020 single “Another World.” NPR hailed the track as “an apocalyptic banger,” and STEREOGUM declared, “Gojira are one of this century’s most important underground metal institutions,” while FORTITUDE was Voted by fans as the #1 release on REVOLVER’s “Most Anticipated Albums of 2021.”
On 2016’s MAGMA, Gojira found strength—and crossover success—through a singular commitment to self-reflection. The intensely personal record, penned in memory of the Duplantier brothers’ late mother, was a painful significant turning point for the French group. The album earned the band two GRAMMY nominations – ‘Best Metal Performance’ and ‘Best Rock Album,’ and upon release, MAGMA took the #1 spot on BILLBOARD’s ‘Hard Rock Albums’ chart, a first for a French band. MAGMA also asserted itself as one of the most acclaimed albums of 2016, earning METAL HAMMER’s coveted “Album of the Year” title while also landing on ROLLING STONE’s “Top 20 Metal Albums of 2016,” and CONSEQUENCE OF SOUNDS’s “Top 50 Albums of 2016” / “Top 10 Metal Albums of 2016” lists.
Gojira’s widely anticipated US tour dates supporting Deftones have been rescheduled for 2021. For the latest touring information, visit www.gojira-music.com.

ALBUM ARTWORK BY JOE DUPLANTIER
FORTITUDE TRACKLISTING:
1.  “Born For One Thing”
2.  “Amazonia”
3.  “Another World”
4.  “Hold On”
5.  “New Found”
6.  “Fortitude”
7.  “The Chant”
8. “Sphinx”
9. “Into The Storm”
10. “The Trails”
11. “Grind”
ABOUT GOJIRA:
Gojira treat heavy music as a living and breathing entity, morphing, transforming, and changing in each iteration. After 2016’s MAGMA crashed the Top 25 of the Billboard Top 200, the history-making French band garnered a pair of 2017 Grammy® nominations, including “Best Rock Album” and “Best Metal Performance” for “Silvera.” REVOLVER cited its 2012 predecessor L’Enfant Sauvage as #2 among the “25 Best Albums of the 2010s.” Meanwhile, ROLLING STONE named their 2005 breakthrough From Mars To Sirius one of “The 100 Greatest Metal Albums of All Time.” Handpicked to open for Metallica by none other than frontman James Hetfield, they have toured with Slayer, Slipknot, and more in addition to headlining tours around the world. The group’s forthcoming seventh full-length album, Fortitude, undoubtedly sees them push the envelope as they change heavy music once again in 2021.
FIND GOJIRA ONLINE:
www.gojira-music.com