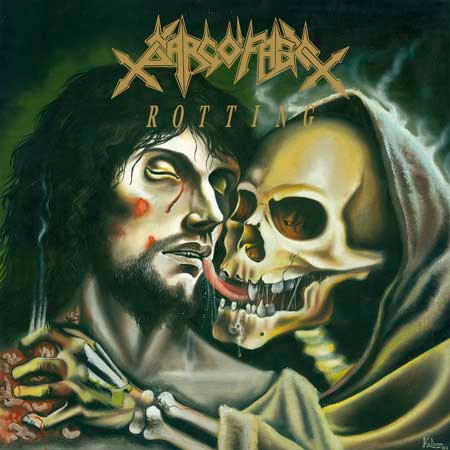 Greyhaze Records has set a release date of May 27, 2014 for the long-awaited vinyl reissue of SARCÓFAGO’S second album, Rotting. Originally released in 1989 via Cogumelo Records, Rotting‘s devastating output made waves throughout the Metal underground upon its original release. Today, the album still stands as a hallmark of Black/Death Metal.

The 2014 Rotting release has been carefully remastered to ensure optimal sound output, bringing out all details of this savage and utterly classic recording. The vinyl will be housed in a deluxe gatefold jacket, which will feature all the original artwork, including a full-color gatefold insert. Vinyl colors will be classic black and limited green with black smoke. The reissue will resonate with fans of MYSTIFIER, BLACK WITCHERY, BLASPHEMY, and BATHORY.

Rotting will also be honored with the release of several special product offerings, including a CD/DVD Digipak version, the release date for which will be announced soon.

Pre-orders for the vinyl reissue of Rotting are now available at this location.

Rotting features an unrelenting and devastating Death/Black Metal attack that, while slightly more polished than the band’s debut album INRI, is no less ferocious. The album brings home its hateful message by way of humanity’s vices and deceptions, such as suicide, alcohol-drenched sex, and of course pure Death/Black Metal, as depicted in one of SARCÓFAGO’S biggest songs “Sex, Drinks, and Metal.”
Thematically, the band delivers an agnostic manifesto against religious superstitions and dogmas. The album art drives that point home by its depiction of a decomposing Christ figure. Rotting‘s cover art was extremely shocking upon its 1989 original release as no band had taken such a graphic approach to anti-Christianity up to that point. Backlash on the artwork went as far having it censored in its 1990 US release.

SARCÓFAGO’S drummer during the Rotting sessions, Manu (Joker), had this to say about his cherished time with the band during the Rotting era: “Rotting is one hell of an album. Even though I recognize the importance of INRI, Rotting is still my favorite Sarcófago album. It’s better built than the previous album, but it still maintains that elemental rawness. The Rotting era was a great time. Wagner did an outstanding job. We were an interesting trio, and when (Fabio) Jhasko joined the band, our firepower became even greater! Excellent memories!”