Hatebreed – The Divinity of Purpose 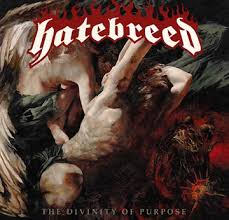 Hatebreed are back four years after they released the album ‘Hatebreed‘, it doesn’t seem that long but it is kids. Now it hurts me to say this but the last album was a disappointment and I hoped they would go back to what they do best…straight to the point brutal metalcore! Hallelujah that is what they have done, this album is the album they should have made after ‘Rise of Brutality‘ (Which is Hatebreed at their best, along with Satisfaction is the Death of Desire) This is brutal beatdown metalcore from a band that have perfected their art.

This release sees them return more towards hardcore with the usual dose of cast-iron metal added along with the gang shouted choruses and smash your face in music! The album is filled full of face pounding beatdowns and the two guitarists (Frank Novinec & Wayne Lozinak) don’t get enough recognition for their solid powerful riffs and short and brutal solos. However one of Hatebreed’s recognisable traits is lead singers Jamey Jasta powerful spittle filled barked lyrics! We also cant forget about the amazing guys who drive the beatdowns and pummel Hatebreed along, drummer Matt Byrne and bassist Chris Beattie!

Yes this isn’t original, however Hatebreed set the precedent and just continue to add upon it, although they do slightly veer off every now and again (Supremacy started going more metal but had its moments and Hatebreed stripped away most of the hardcore element, not what fans wanted. Although a few good songs are on the album)

Anyway back to the songs on ‘The Divinity of Purpose‘ – any of them would make great additions to the already full of classic live set-list with opening track “Put it to the Torch” a brutal 2 minute pit classic, while “Dead Man Breathing” is driven by a Slayer-esque ‘South of Heaven” style riff and would be the pit pit-stop song before you pummel along to the next brutal song! While “Own Your World” starts with the gang shouted lyrics of “Who’s got more heart than you? No One!”, before it pummels you. While “Indivisible” starts off with the drums pounding and the gang shouted lyrics before beating your senses to a bloody pulp. “The Language” is another classic with the fast guitar riff starting the song off before it goes to a vicious beatdown pace and then speeds back up again. I could stay here all day and describe each song for you in detail, but then you wouldn’t have to go and get the album. So get off your arses and buy this album!

‘The Divinity of Purpose’ is 38 minutes of pure stand together, “can do” attitude, take no shit metalcore and you will keep listening to the album over an over again as it is that infectious! Yes it isn’t as good as ‘Rise of Brutality‘ but its up there! Get this album and go see them live as it will be fucking brutal…see you in the pit fuckers!