HAWKWIND Into The Woods the new album 5 May 2017

Cherry Red Records are pleased to announce the release of the new album by the legendary Hawkwind, Into The Woods. In many ways, it is the perfect sequel to last year’s acclaimed concept studio album and live stage show, The Machine Stops, which was inspired by E.M. Forster’s Sci-fi classic, a dystopian vision of the future brought to life with characteristic Hawkwind style.

Warm-up dates for Hawkwind in mid-March are dubbed ‘A Glimpse Into Greenness’, which gives some indication of the conceptual and lyrical themes behind the band’s new album. To promote Into The Woods, Dave Brock and Co. will be touring through May, beginning on 10th. The tour culminates in what is set to be a memorable show at London’s prestigious venue The Roundhouse on 26th May. It will be 45 years since Hawkwind played at the venue’s historic ‘Greasy Truckers Party’ in The Roundhouse and first recorded ‘Silver Machine’ 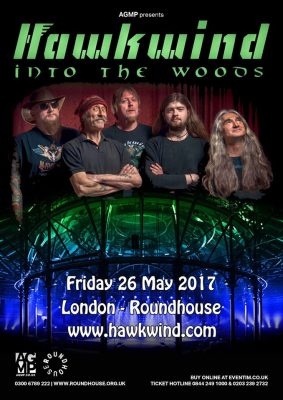