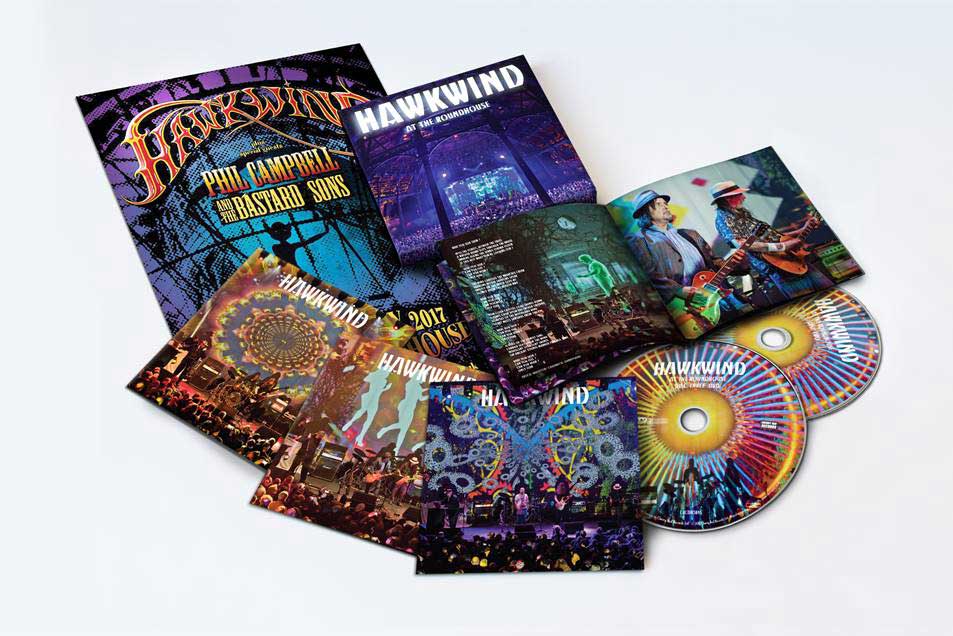 HAWKWIND At The Roundhouse 2CD/DVD

On Friday 26 May this year, Hawkwind returned to London’s legendary Roundhouse venue in Chalk Farm for the first time in 40 years. It was also some 45 years after the band famously performed at the venue (captured for posterity on the Greasy Truckers Party album), where they recorded the hit version of ‘Silver Machine’.

Six months on, this amazing, historic show is captured for posterity within a deluxe, celebratory box set, which boasts audio and audio-visual versions of the entire performance. The set-list blends highlights from Hawkwind’s last two acclaimed, Top 40 albums The Machine Stops and Into The Woods with classics from the band’s past.

“Yes, it was really good fun playing back at The Roundhouse,” explains Hawkwind’s band leader Dave Brock. “After not playing there since 1977 (when we had Motorhead support us), it brought back many fine memories for me. Great venue!!”

The show climaxed with guest guitarist Phil ‘Wizzo’ Campbell (Motörhead, The Bastard Sons) joining the band for encore performances of ‘Brainbox Pollution’ and ‘Silver Machine’, the hit version of which was recorded at the Roundhouse back in 1972.

The concert is captured across two CDs and the event can also be enjoyed via a DVD, which reveals an amazing lightshow by John Moules. A multi-disc vinyl edition will follow early in 2018.

Dave Brock and the band are available for interview to chat about At The Roundhouse, the latest instalment in Hawkwind’s remarkable career.

ALL ABOUT THE ROCK & SOS FEST 2018 ANNOUNCEMENT