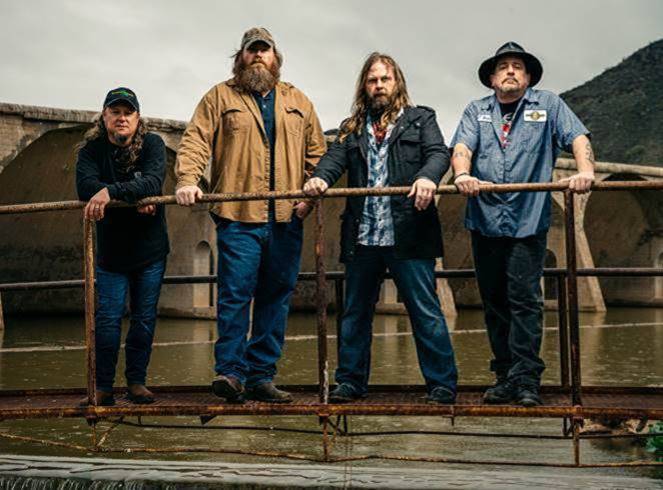 Rambunctious Southern Rockers Hogjaw are proud to lift the lid on new video & single, ‘Way Down Yonder’ – the title track of their latest album, out now via Snakefarm Records. What’s more, the band will also be re-releasing their 2015 album, ‘Rise To The Mountains’, on Sept 28th 2018, just before they kick-start their first ever headline UK tour. That’s a whole lotta Hogjaw comin’ our way!

Hogjaw hail from Arizona and describe themselves as “Four fingers folded into a fist!”: JB Jones (vocals and guitar), Jimmy Rose (lead guitar), Elvis DD (bass) & Kwall (drums). “Hard-hitting southern fried electric rock” is how they define their sound, although their influences are drawn from a deeper well: imagine Free, early Rainbow and Whitesnake, marinaded in Blackfoot and The Allman Brothers, then steeped in moonshine. Solid Southern blues-rock. Oh, and beards!

Hogjaw’s video to support ‘Way Down Yonder’s supernaturally-themed title track and single is filled with the kind of energy and oomph! that only big men with attitude plus an aversion to razors can truly provide. Bluesdoodles captured the heart and soul of the track thus: “‘Way Down Yonder’ has a riff which… is a southern fried gumbo of Rainbow’s ‘Sixteenth Century Greensleeves’. This should mean it is wrong but, even with the spoken word section sounding like Johnny Cash, and then an a capella hand-clap bit, somehow (damn it!) this is still a great song”.

“When we wrote the song ‘Way Down Yonder’, it started with this cool, mystical story-line, and JB – who has produced many of our videos – came up with the whole concept based on what he had written. It might have been nice to shoot everything in the swamps of Louisiana, but instead we kept to our home state of Arizona. We were able to go to three outdoor locations that showcased different areas. We like to call it the ‘desert swamps’! Hope everyone out there enjoys these few minutes as much as we enjoyed making them!” – Hogjaw

Produced by the band & Byron Filson, ‘Way Down Yonder’ (the album) features 11 new tracks ranging from the clean, mellow pickin’ of ‘Back Home Today’ through to the heavy swamp groove of ‘Never Surrender’.

Meanwhile, ‘Rise To The Mountains’, their 2015 10-tracker, includes the Southern classic, ‘I Will Remain’…

“This was the last album written at the Hog-Pound House where a lot of musical magic was achieved. Plenty of whiskey was drunk on hot summer nights, with loud music grilling in our ears; the outcome was 10 songs that we felt proud of, and we did not hesitate to support the album by touring and releasing three videos: ‘Where Have You Gone’, ‘The Smoker’ and the epic ‘I Will Remain’. As we break into the middle of 2018, we Hogjaw guys are excited to see this album soar to new heights, with the Snakefarm re-issue blowing some fresh air into it… go get a copy and throw it on!!! Cheers!” – Hogjaw

To support this re-issue plus its ‘Way Down Yonder’ follow-up, Hogjaw will be headlining a UK tour in October, bringing their own brand of Southern pride and joy to cities the length and breadth of the land. See the tour dates below, or visit the band’s website at http://hogjawmusic.com/.

So, y’all, check out ‘Way Down Yonder’: the track, the video, the album! Also, the re-release of ‘Rise To The Mountains’. And last but not least, go see the band on tour!

It’s the Year Of The Hog.