Hi Ben, I hope the New Year has started well for you guys!

Yep, all good here thanks!

You guys have just come back from playing the fabulous HRH Metal event in Birmingham, how did that go?

The gig went really well for us; we had a great crowd who were up for it, a set full of energy, and I think we held our own against some great bands!

You announced back in July you were working on a new album, which will be album number #5, how is that going?

It’s going slow, but then again we’re in no rush to complete anything we think is sub-par. We’re going at our own pace and trying to make sure we write the best album of our career so far, rather than rushing to fulfil the expectation of delivering an album within a set time frame from our last release. At present we are without a label, and without management – so it’s all up to us.

How is the new album going to compare to your last album Skull?

Well, it’s still early days but what we do have so far is sounding typically ‘Evile’… We may be leaning in a different direction again from earlier stuff, in that we’re again bringing in more of our own individual influences and mixing them with the thrash idiom as a whole. We’re still very much of the school of thought that we write songs we’ll not only enjoy playing live, but songs that will also challenge us as musicians and show a progression in our musicality. With the addition of our new guitarist Piers contributing also, it’s an interesting time to be making music for us.

Will you be working with Russ Russell again when producing the new album?

Russ has again nodded that he’d like to take the helm at the desk, so yes I’d say it’s a possibility

Is there a release date for the new album yet?

How are you expecting your fans to react to your new material?

We want them to buy it and enjoy it haha!!

Last time we caught up with you guys you were playing the almighty Hammerfest part of the HRH group in Wales in March 2016, are the HRH events something you guys are affiliated with as you seem to play a lot of their events.

No, we’re not affiliated with anyone at all, we just keep getting asked to play the HRH events and we keep saying yes haha! They’re great events and it’s great to be asked to play alongside such great other bands they always have on the bill.

Back in 2015, we saw you welcome Piers into the Evile fold to which his debut show was at the Underworld in March 2015, how has he grown into his position in the band?

He’s a fantastic addition to the band, and he’s very much settled in without skipping a beat. He’s full of youthful exuberance and enthusiasm and he’s really refreshed the band. He commands the stage in his live performances and he’s a great fun guy to have on tour and in the band.

Are you guys still with Earache?

Not anymore, we parted from Earache after the completion of the ‘Skull’ album.

How are you working things now without a label?

We are very much self-managed these days and most enquiries come to us directly. The decision-making process is a democratic process between the four of us.

Would you say that money has decreased when it comes to record sales, it seems the only way medium level bands can earn a crust is by touring and merch sales, what is your view on this?

I couldn’t comment on the financial side of things as it’s a hugely varying topic that changes from one band to the next. I would say that a band has to be visible and seen to be active, as the industry moves on so fast. Bands come and go in a heartbeat, so for us it’s a huge privilege to still be able to make music so far distanced from our last album. We have extremely loyal fans and without those, there wouldn’t be anyone TO sell albums and merch to. It’s difficult to NOT tour and make money as a band.

How would you say the likes of social media has helped bands?

It’s a great tool to communicate and get a band’s name out, but in some respects it deepens the ocean for all the bands to swim in. There’s a level of competitiveness between bands that seem to be all governed by how many ‘likes’ or ‘follows’ a band has. I think this number is relied on too much to indicate the level of ability of a band and it’s ‘touring worth’, but it is a great platform for fans to feel closer to their favourite bands and feel involved.

Before we finish is there anything you would like to say to your fans?

We’d just like to say a huge thank you for the continued support throughout the last few quiet years – we’ll be back very soon with something new which we hope will blow you away. Stay Tuned!

Thank you for your time today Ben and we look forward to seeing you guys soon! 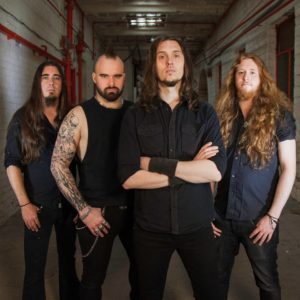