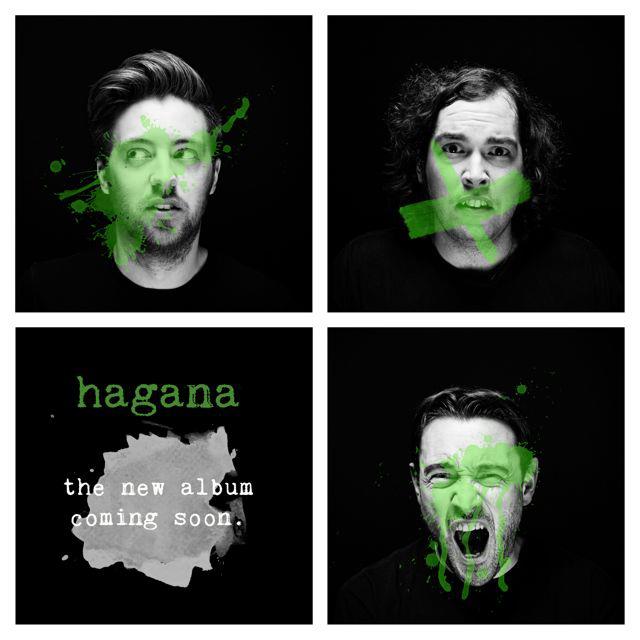 My introduction to Hagana was seeing them support Filter at the Edinburgh Liquid Rooms back in August, where I was blown away by their blistering set of catchy rock tunes.

I was so impressed that I downloaded the EP from their bandcamp page, and went to see them play live again a few days later.

Hagana are an Edinburgh based band that write well crafted songs with the most amazing hooks, and who play with a real passion and conviction.

I decided that I needed to know more about this remarkable musical trio and approached them, requesting an interview for All About The Rock…

First of all guys, a big thank you for agreeing to this interview for All About The Rock, and giving our readers a chance to hear about Hagana, your forthcoming album, and your plans for the future.

Can you tell us about the band ?

The band originally started about 10 years ago with Leo and collection of people from his first year in college who formed a band.  There were 6 in the band – including 3 guitarists, and a trumpet player – and it was all a bit of a mess.

At this time we were called “Unknown Hagana” – the name came from something we’d read and, as we didn’t know what it was, we decided it would be cool to call the band  “Unknown Hagana”.  We now know that Haganah was a Jewish freedom fighter!

So that’s why your first album is called The Best Of The Unknown Years !

Exactly.  It’s the best music from our time as “Unknown Hagana”.

Anyway, we became a musically tight group during this time – it was a sort of apprenticeship for being in a ‘proper’ band as we are now.  We changed the name to Hagana, and released our Hagana EP.

And then a couple of years ago Gary joined us as the bassist.  He’d played in some other bands and played gigs alongside Hagana.  And Hagana had also appeared on a radio show Gary had done at the time for Leith FM.  So he’d already seen Hagana and loved our stuff, so when he was asked if he would like to join he was really keen. How would you describe your music ?

Pop-rock probably best describes us.  We like music that is rocky, but that has a catchy chorus. We write songs with good rhythms and melodies.  We like to incorporate different elements into our music.  We’ve evolved our sound over the years, and the new record reflects that.  It’s got a groove.

I’d probably describe you guys as indie-metal – does that term cover the Hagana sound?

We definitely have hooks like indie bands, and there is a definite metal influence – our influences do include bands like Nirvana, and XTC.  And we like the whole distortion, quiet-loud thing. But we listen to different forms of music and we like to have a pop hook sense of melody in our songs.

Leo comes up with an initial song structure and melody.  And then we rehearse together and it becomes a band song as we all get involved in it’s development.  So our songs are a real group effort.  Lyrics come once the chords and melodies are sorted, and are primarily worked on by Leo –  though again the band are all actively involved.

And for our new record, One Year, we mixed and produced this ourselves (David works as an engineer / producer at Soundreach Studio, Edinburgh).  Which meant we had complete control, which was fantastic and meant no deadlines or costs that forced us to rush things.  It was a lot of effort, but it was totally worth it as we’re really happy with the final sound of the album.

Where does the name come from?

We called it “One Year” because it took one year to do, and because it was a turbulent year for us – we’d all been through a lot of personal stuff during that time.  But also, in the grand scheme of things, a year is nothing.  So we wanted to reflect that with the album title and artwork.

And what’s the plan for the new record ?

We’re going to release it ourselves.   We’ve always been a live band first and foremost, and we’re happy for people to see us and become aware of us that way.  Saying that, we will be looking to get an increased online presence and will be sending copies of the album to magazines etc.  But we want to keep touring and do things the way that feels right for us – rather than following some of the advice you hear about having to do things a certain way when releasing an album.

We’re going to be filming a video for the first single, ‘Fuzzy Punch’, in a few weeks time.  So that should be out a month or so before the album, which will also help to build up some momentum.  But we’re a strong band and, as we say, playing live is our preferred way to get noticed and to sell CDs.

That’s how I got into you guys – I saw you supporting Filter, and then visited your bandcamp page.

Yeah, exactly.  And we’ll probably use bandcamp to sell physical copies of the album, as well as Spotify and iTunes.

How was the Filter gig?

It was really good.  Probably the biggest gig we’ve played.  Filter were very nice guys and we really enjoyed playing to such a big crowd.  It was all last minute really – we only got asked to play 5 days beforehand!  And David flew back into Edinburgh from Poland the day of the gig so it was a bit manic.  But we’d done the Canadian tour, and we had set we were comfortable playing – so we the timing felt right and we knew we were ready for a gig like that.  Which is why we didn’t feel or look out of our depth.

Small.  There are a lot of venues closing down.  But there are still some good ones – we really like The Wee Red Bar, and Electric Circus.  And there are some good bands – such as Titus Pullo, and Vasquez. So, you guys played some gigs in Canada recently.  How did that come about and what was the experience like?

Leo’s wife is from Canada, and she was working there for a while.  So we were going to go over on holiday, but her mum was able to organise some gigs for us.  So weplayed 6 gigs in British Columbia and around the Vancouver area.

And it was a fantastic experience.  At the first gig the editor of a syndicated press newspaper was there with his girlfriend and loved us.  He was an old punk rocker who could hear that punk element to our music, and he interviewed us backstage after the gig.  The next day there was a whole page article / review on us, that was then syndicated.  It was amazing.  He was an old school journalist and it was really well written in an almost Rolling Stone magazine sort of style.

And the last night, when we played at the Lasqueti Island Hotel pub, was one of the best gigs we’ve ever done.  The island is a sort of paradise / hippy colony where people go to chill out or to be off-grid.  We played on the decking outside, with the ocean and mountains in the background, and with a sunset and deer running around.  And as we were playing more and more people turned up.  They asked us to keep playing so that in the end we played for over two and a half hours.  And everyones reaction was amazing.  People were singing along to our songs, even though they’d never seen us before.  It was the fantastic ending to a fantastic trip away.

The Canadian audiences at all the gigs we played were lovely and positive, and recepitve to what we were doing.  We sold some CDs of the new album (so it got a sort of pre-release in Canada) which was also very cool – though it was weird being asking to sign them!

And the reaction we got from everyone – them taking us seriously as musicians and as a band – made us realise that we can take ourselves seriously too.  That we can be a successful band with the release of One Year.

So would you be keen to do something similar again?

Europe would be cool to tour.  David’s girlfriend is Polish, so maybe Poland would be a good place to start.  But for now that’s a longer term thing.  We’ve got the video to do, and then the album launch and release – so we’re going to be busy.

We’re also headlining the Edinburgh Haddowfest festival so will be playing at Sneaky Pete’s on Friday 11th October, as well playing a few gigs up north in November (Aberdeen and Inverness – and Dundee and Perth to be confirmed).

Thanks a lot for your time today guys – really appreciate it.

The new Hagana album, One Year, is due out in November.