After a 10 year stint since their last album ‘Chutzpah’ , the almighty Wildheart’s put aside their differences and join forces once again to create the empowering masterpiece that is ‘Renaissance Men’.

Reconciliation’s between Ginger & Danny are made, and the band head out on tour to give the fans a taste of their long-awaited new album.

We catch up with the band at Manchester Academy where CJ awaited our arrival for a chat.

Read on to see what he had to say… 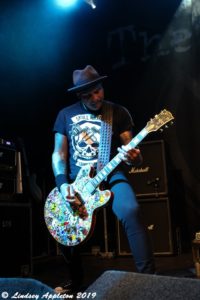 Hey CJ how you doing?

We see you guys are back with a new album after a short break (laughs) , 10 years since your last album ‘Chutzpah’.

Obviously we see yourself and Ginger have been doing your own solo stuff in the background since then.

But what we are all keen to know is how Ginger and Danny managed to put aside their differences after all this time. I think I can say on behalf of your fans we are happy to see this happen and see you guys back out there together again!

You just get older don’t you,and make up. You know me and ginger we fall out and make up all the time. Its part and parcel of being in a band. We are the Wildhearts after all, we can be quite volatile. At the moment it’s really good, we are all on a really good level, we are back out on tour with our new album, its good vibes all around. It’s the most positive its been in decades.

You did a meet and greet at HMV earlier in Manchester how did that go?

Amazing, you know when you do these meet and greets you never know how the turn outs are going to be. Sometimes we have turned up and there has been about 5 people which can be quite embarrassing. But today was a really great turn out, there’s so much good will around us, especially with this line up and with the release of the new album.

Indeed ‘Renaissance Men’ which has gone down a storm with your fans, how did you find the recording for this?

It was relatively painless to be honest, we wrote the album over the course of about 5 months, ginger came up with some of the acoustic ideas so we hit the rehearsal rooms and turned them into songs. Then we had something to take home and work on, we demoed everything. Then we went into the studio and recorded and it only took about 2 weeks to do. So you know it was quite quick. But you know we did a lot of prep work for it.

Any fun stories from the studio you can tell us about?

The only time all 4 of us were in the studio was for the last day and a half, so Ritchie went in and did his drums, Ginger went in and layed his guitars down, then myself and Danny went in and did our thing, then ginger went in and did his vocals, then I went in and did all my backing vocals. It wasn’t one of those great rock n roll adventures where we were locked in a glamorous place recording for a month or anything like that. There were no midget’s or cocaine or playboy models (laughs). Nothing wild like that, we aren’t kids any more, we are closer to 60 than we are 30, we don’t act like we were 25 years ago. If we were going round acting like that now we really would be the biggest C**nts that walked the face of the earth. (laughs)

Who came up with the album title and where did the concept come from?

Ginger came up with the album title, its pretty self-explanatory.

The Renaissance – its all about rebirth and art. We all feel reborn, this album is a rebirth for us.

Obviously a decade is a long time and doing your own solo stuff, do you and ginger find it hard to come up with new ideas and concepts for songs?

Ginger has obviously made many solo albums in that time, I’ve made 3.

I wrote a song on the album.

We have always made music, we have always kept our music flowing it’s not like we have been sat back not doing anything over the last 10 years. We have done anniversary shows, and some acoustic shows where it has just been me and ginger.

Yes I remember seeing you guys at a small bar last year in Bolton.

Yea we have always kept our finger in the rock n roll pie.

Yea, there are elements not just on this track but various parts of the album where our range is really pushed. On this track Ginger has been pushed above where he usually sings vocally, then I have to go above that with the harmonies. It’s nice that we are pushing ourselves, the vocals are clear on the album. In the past we sunk a lot of the vocals with heavy guitars on top. This time we wanted to show what we can bring to the table, it’s really important people can hear what we bring to the band.

I definitely think its different and the album itself is your best yet.

We see that Frank Turner did a cameo on the album on the song ‘Let Em Go’, how did all that come about?

He’s a massive fan and he’s played with us a couple of times. If we are in town or he’s in town, he’s always gets up and does a couple of songs with us.

Ginger asked him, and he said yea, so we sent him the song over, we told him the few lines we wanted him to sing, and he recorded it from his hotel room and he emailed it back to us and that’s how it all came about.

It must be really nice working with another artist and getting their view on your music and have them throw ideas at you?

Yea music’s changed and the way you record musics changed, you don’t all need to be in the same country or studio to get things done now.

I’ve done it where I’ve recorded pieces for other artists and sent it via email to artists in other countries, its nice that technology enables you to be on the same project but not have to necessarily be in the same country to do it. 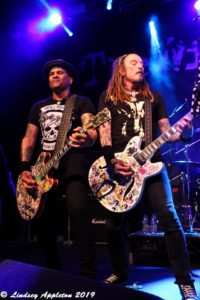 We see that you guys have lots lined up from ‘The Bearded Theory Spring Gathering’ at Catton Hall at the end of May, to Ginger playing Camden Rocks in June. You guys spend a lot of time out on the road how do you unwind when travelling?

We do what anyone does really we read, watch movies.

I suppose sleep is an important one.

Yea, well me and Danny are really early risers, I think Danny was up at 5 I got up at 6.

Back in the day id be lying if I said we didn’t get high or got drunk all the time, we just don’t do that anymore, we have changed our lifestyle as we have got older.

Right I’ve got a curve-ball question for you now, if you were to be given a column in a music magazine called ‘Cooking with Rockstars’, what would your signature dish be?

Oh that’s a good one, it would have to be something spicy. I love my spices. The hotter the better. I love heat, spice Is a big part of my life, my signature dish would be a curry.

Daniels I think would be a pot noodle, I couldn’t tell you what Ginger ‘s signature dish would be, and Richie’s a jacket potato man.

What’s next for the band? Lots of touring?

There’s ways of breaking new markets and territories, we have been around for 30 years and we have had major labels try to break us in America and all over Europe. The 2 countries we have good followings in are the UK and Japan, people know who we are, if any band who has been around as long as us, with dramas and stories will know its the fans who carry the music through word of mouth helps create a following for us. The press as well is a great help for bands pushing our music out there. We also have a good strong management team behind us. We have gigs announced in other countries, we’d like to tour places like the US

A Is there anything you’d like to say to your fans and followers?

They are the best, they are Wildheart fans after all. They are crazy and we call them family because that’s what they are to us. We appreciate all they do for us from buying our merch , coming to gigs and listening to our music.

AATR – Thanks for your time today CJ, we will catch you out on stage later!