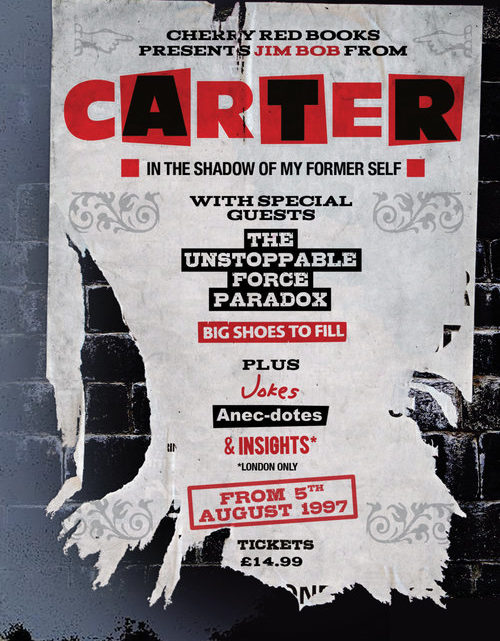 Between 1987 and 1997, Jim Bob rode a decade-long rollercoaster from the UK’s pub and club scene to the top of the album charts and back again, leaving behind a trail of hit records, legendary gigs and enough t-shirts to clothe a small nation. As recounted in his first autobiography, the critically acclaimed ‘Goodnight Jim Bob’, Carter The Unstoppable Sex Machine toured the world and sold the records, during the UK’s last period of genuine musical free-for-all, mutating from a two man and drum machine combo to an extensive six (sometimes seven) piece group along the way. But then the rollercoaster stopped…..

So what next for a recovering former rock star? Whatever happened to that bloke from Carter?

‘Jim Bob From Carter (In The Shadow Of My Former Self)’ documents Jim’s ongoing journey as a solo artist and author – a man in search of who he is, while constantly being reminded who he was. Whether he’s singing in a disco-pop band, performing solo acoustic ballads, writing novels or acting in a musical at the Edinburgh Fringe Festival, it’s clear he is still, for many people, Jim Bob from Carter. At first Jim sees this legacy as a burden and something to escape from, but gradually he learns to accept, embrace and eventually celebrate (hooray!) his glorious past.

This is a funny music book – the funniest music book ever written, according to the author – about Jim Bob’s extended gap year between the acrimonious break-up of Carter in 1997 to their eventual reformation in 2007 (and crinomious break-up again in 2014). Find out how bands choose their names, what it’s like to be sworn at by Ian Dury, how it feels to discover yourself on a pub trivia machine under the category ‘Where are they Now?’ and why there isn’t a prime time Saturday night TV show called ‘Britain’s Got Authors’.

There’s also the usual boring stuff about lyrics and a few music business clichés, like earlier in this blurb where the word ‘journey’ was unnecessarily used.

Jim Bob is now a successful author (Storage Stories, Driving Jarvis Ham, and two Frank Derrick books) and solo artist, both on record and in concert (Carter material guaranteed). He lives in that London.

The author will also be performing a highly anticipated solo concert (his first UK date in a year) at a large London venue to coincide with the book’s release.

To hear an extract from the book click here