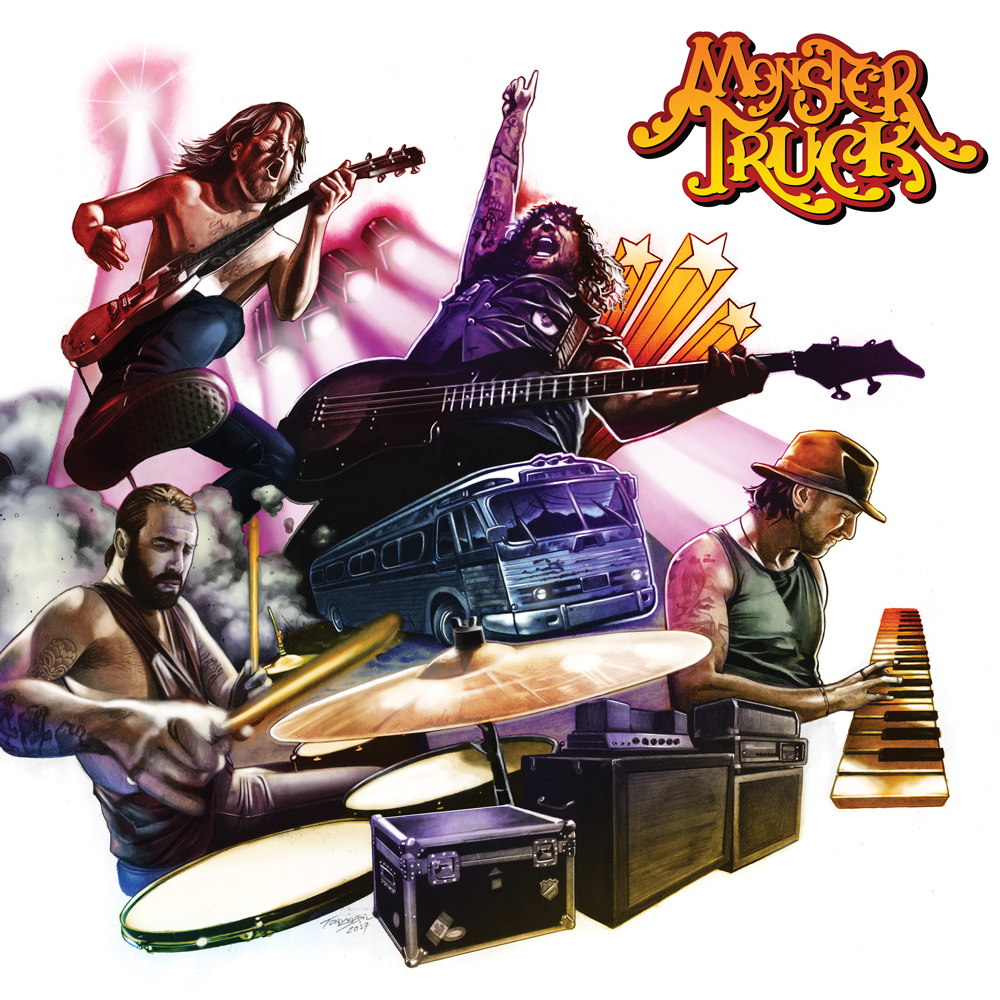 Monster Truck returned with their brand new album ‘True Rockers’, which will be released on Mascot Records/Mascot Label Group on 14th September 2018.

First of all thanks for taking time out to speak to us this evening we know how hectic your schedule can be, we appreciate any spare time we can get from musicians and artists!

You have just released a video for your latest single “Evolution” from your new album “True Rockers”, do you want to tell us a little bit about the recording of the video and any behind the scenes stories you can tell us about?

The ‘Evolution’ video was great to make! We did it in an old warehouse in our hometown. We got a bunch of fans to come and be extras, and they did a great job. In the end we got what we intended, a black and white video with an authoritarian conflict.

The concept behind the video, is that an idea that you guys came up with or the film production team?

The idea from the ‘Evolution ‘video was mine. We take our creative direction extremely seriously. We even design and layout our own records and merch, that way everything is how we intend.  It was more about a look than a story. The director, Joe DiBenetto, then elaborated on my idea and came up with the final concept. So it was just a black and white “rebellion” scenario.

“True Rocker” features the legendary Dee Snider of Twisted Sister, how did all that come about?

Mr. Snider found about us and reached out to us initially. He’s a real music fan, and helps out young bands as much as he can. So we starting talking here and there, and when we wrote “True Rocker” there was a long instrumental that I wanted a “rock n roll preacher” vibe. So I got in touch with Dee and he was all about it. I mean it couldn’t have been cast better by Hollywood.

Listening to the album, you guys have really given us a mixed bag of treats!, from “The Devil Don’t Care” which has a real southern vibe to punkesque sounding “In My Own World”.

We really wanted to show our songwriting chops on this one. While we were writing we had a few other styles to explore too. We’re not ones to be type casted.  We just try to make every song unique in its own way while still maintaining the overall vibe. It’s not a conscious decision, it just the way things work out.

Working with different producers was different. But both sessions were done so far apart that it was really two different experiences, which made it familiar.

Song-wise, I don’t have a favourite song, they are all my babies.

The album itself keeps you on your toes wanting more with all the face paced rhythms, you just can’t anticipate what’s coming next!

Keeping people guessing is our business. We always spend time on the track listing. I think everyone does. It’s essential to the flow of the album.

This album has made a bold impact which will imprint on many rock fans.

Personally I’d say your best work to date! Is this the impact you were going for by giving us a mixed selection of styles within your songs?

Wow thanks! We’re really proud of the songs on this one. We were trying to write the most eclectic piece we could that encompassed all the styles of rock. While we write we barely think about its impact on our audiences. Some may see that as ignorant but to be honest we are our own worst critics.

You have a great run of European Tour Dates coming up with the fabulous Black Stone Cherry and Cadillac Three In November and December are you all prepared and looking forward to this?

We’re very excited about spending some time with BSC. Great guys. We have briefly toured with them in the US and had a real great time. I anticipate some late nights. Looking forward to meeting the Cadillac 3 boys too. Tennessee produces some of the finest folks.

How do you guys prep for a tour like this?

Practice, practice, practice. We write a set that we’ll start the tour with and go to work on it.  Big arenas are great. It’s hard to connect to your audience but it really hones your skills as a performer.  Our set list is always out most popular songs. It’s the only way we know how to do it.

You then go into playing the Shipwrecked Cruise in January, very busy guys!

On days off how do you spend your time? Do you get chance to take in any sites in the towns you’re travelling through?

On days off we EXPLORE! We get to see so many awesome museums and galleries. We’re really lucky to get to eat, drink, and get cultured all over. I think it would be a terrible waste to not experience at least part of every city we play. And we’re not famous at all so, that makes it much easier.

More and more touring. Now we go to work. We’ll be back and forth across the pond quite a bit I think.

If you could choose to have a conversation with anyone in history who would it be and why?

I would like to chat with George W Bush off the record. I have a few questions about those 8 years and its impact on the present.

If they were to make a movie about the band, who would you want to play your part?

David Cross in a wig., because it’s hilarious.

Many thank Jon for taking the time to answer a few questions. I know you’re a very busy man. It’s been a pleasure