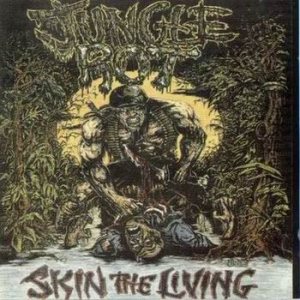 What have I got here to review for you? Yep I have Jungle Rot first demo “Skin The Living” which has been remastered and reissued by Victory Records. Now this was original released in 1995 on tape only (that would be cassette tape) and then issued on CD a year later. Now I was lucky enough to get my hands on a copy of the demo through one of my tape trading buddies. Yes kids that’s right death/black/brutal metal was very underground and we swapped tapes to share bands etc…no internet or easy access to music on iTunes, Amazon etc. I had buddies in Norway, America, Germany and many more and we swapped tapes and even sent HAND WRITTEN letters to tell each other of new bands, I can imagine all the looks on your faces now! This was how metal was…

Anyway “Skin The Living” is skin shredding, putrid, groove-laden death metal…it is like early Six Feet Under, Cannibal Corpse and Obituary. If you have never heard of any of these bands then you might as well stop reading this review and slap yourself. This is 24 minutes of technical guitar leads backed up by skull crushing groovy riffs, brutal but simplistic drumming with extremely heavy vocals that are deeper than Chris Barnes. Jungle Rot play more of the traditional death dirge metal (Obituary, Autopsy etc) with a groovy grindcore influence added to the mix that also smacks you in the face with a dash of thrash for good measure.

The riffs are the real weapon in Jungle Rot armoury and that is why the drumming is probably kept to a brutal pounding instead of an overly complex beating which some death metal bands do and can detract you from the killer riffs Jungle Rot lay down. This album/demo has to be listened to more than once as some people on 1st listen will say there is nothing new here (which there really isn’t), but not all the riffs stand out at first. So persevere and you will be awarded with a slab of rotten to the core death metal.

The mix is still not the best, but it is better than the original tape I had, but this is a solid demo and it is a shame that Jungle Rot seem to have languished in death metal limbo and they do deserve more recognition. I would recommend this album to you if you love finding new death/thrash metal bands and having your cranium crushed by brutal riffs!!!