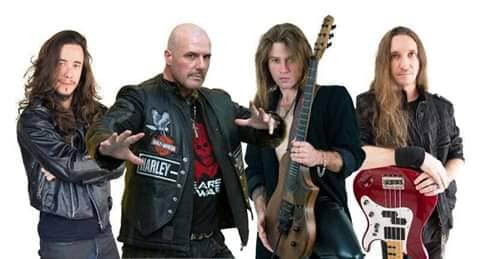 South America’s guitar virtuoso, Kiko Shred, announces that he and his band have inked a Worldwide deal with RFL Records. A frenzied assault of neo-classical infused, melodic, hard rock is set to be unleashed with the band’s new album “Royal Art.”

“It’s a pleasure and an honor to be part of a highly professional label as the RFL, beside talented artists and a great team!” “We are looking forward to getting our music out to new fans and reaching all of our goals.”

Guitarist and band founder Kiko Shred has made plenty of noise in South America. Since he started playing guitar in 1993, he has studied with several great guitarists and has played in a multitude of high impact acts and continues to set the bar higher. With the release of 2 albums; 2016’s “Riding The Storm” and “The Stride” in 2017, he now looks to take the next step with the launch of “Royal Art” in 2019. Kiko is no stranger to the big stage having officially joined the Latin American band of former Judas Priest vocalist Tim “Ripper” Owens in 2015 and played with Owen’s this past April on the South American leg of the Tour. With the release of his second album, “The Stride” in 2017, International praise intensified and Kiko launched his first solo tour in Mexico, a country that he had previously visited while in Owen’s band.  In 2018 he returned to Mexico to accompany the legendary vocalist Michael Vescera (ex Yngwie Malmsteen / Loudness / Dr. Sin) for several shows and after performing the shows with Vescera, was asked to remain for a series of guitar clinics. During the trip, he received an invite from the cabinet of the presidency of Mexico where he received a medal thanking him for his presentations to the country; some amazing accolades indeed. In 2018 Kiko started the production of his third album titled “Royal Art,” under the production of Andria Busic. To stabilize the band for this latest project, he called upon veteran vocalist Mario Pastore to join Will Costa, Lucas Tagliari, and himself to cement the high-powered lineup. Costa and Tagliari already having developed a strong rapport with Kiko, playing shows with Ripper Owens, Vescera, UDO, André Matos, Doogie White, Blaze Bayley, make this lineup one to keep your eyes on in the coming years.

2019 marks the release of the album “Royal Art” and the band’s first show abroad, held at the Metal Oasis festival in Chile. From here on out there is nothing, but big things on the horizon for this Six String master. The world will soon see the talent that is Kiko Shred.