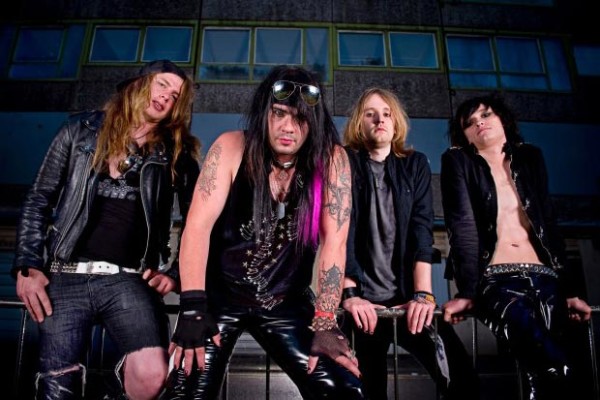 Another night in the glorious Scottish capital that is Edinburgh.

Dean Foxx, Jimmy Bohemian, Danny Krash & Lee Byrne hit the stage with the 1st song off Rise of the Electric Jester, 16 Grams of Heart Attack. A rip roaring rocker of a tune complete with shouty refrain. A perfect start to what will turn out to be a set sprinkled with old & new songs.

A little known fact that came to  during an interview (which will be made available soon) the band DO NOT rehearse.

They’ve been together for over 10 years & have that much faith & trust in each other that there really is no need as they’re a finally tuned machine & they’re not joking.

I have seen this band a number of times (not just as a support act but also a headline act) & they never fail to amaze. Sonically & musically they are as tight as a nuns chuff.

This is one band I will never get bored with watching.

The fun in watching this band is between songs. Dean is very well suited to being a stand-up comedian (I’m sure if he wasn’t a singer this is what he’d be doing). Pretty much every song is introduced with a short tale about the next tune your oral senses will be bombarded with & I have to say they are hilarious. This is where the band truly come alive & the fun starts. They have been described as “an 8 legged walking disaster area” & that’s pretty much an understatement. The songs are incredibly well polished but it’s the onstage banter & stories is where the smile & laughter start. This is a band that like to have fun playing & it really shows.

The 2 singles Set The Night On Fire from the House of Sins album & Aint Your Kind (due for release shortly)from the new outing Rise of the Electric Jester make a surprising early appearance in the set. Which is a very brave stance to take. Most bands leave the singles to last but Knock Out Kaine are a band to always take risks.

An impromptu version of the myth & the legend that has become Aunty Vals Vaginal Douche reared its head complete with a whole new verse! A truly magical occasion. Steve Earles Copperhead Road also makes its appearance in the set & judging by the way the band plays it, it’s a firm favorite of theirs.

The set finishes where the set begins with a song about drugs, Little Crystal. Whether this is a conscious decision or not is hard to tell but as with the albums, it’s a great concept.

Yet again another fine evening spent in the wonderful cavernous setting that is Bannermans Bar in Edinburgh with a superb band.

If you want to see a band who are stadium ready in an intimate venue then go & get a bit of Knock Out Kaine.

If you want to see 4 blokes have a laugh & play some amazing tunes then grab yourself a huge handful of KOK.

Either way you wont be disappointed.

Keep a look out for the name coming to a venue near you soon & you’ll see why we at AATR towers have been championing this band for some time. 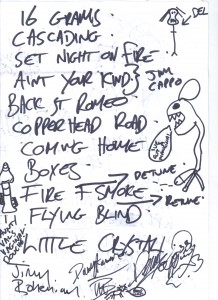