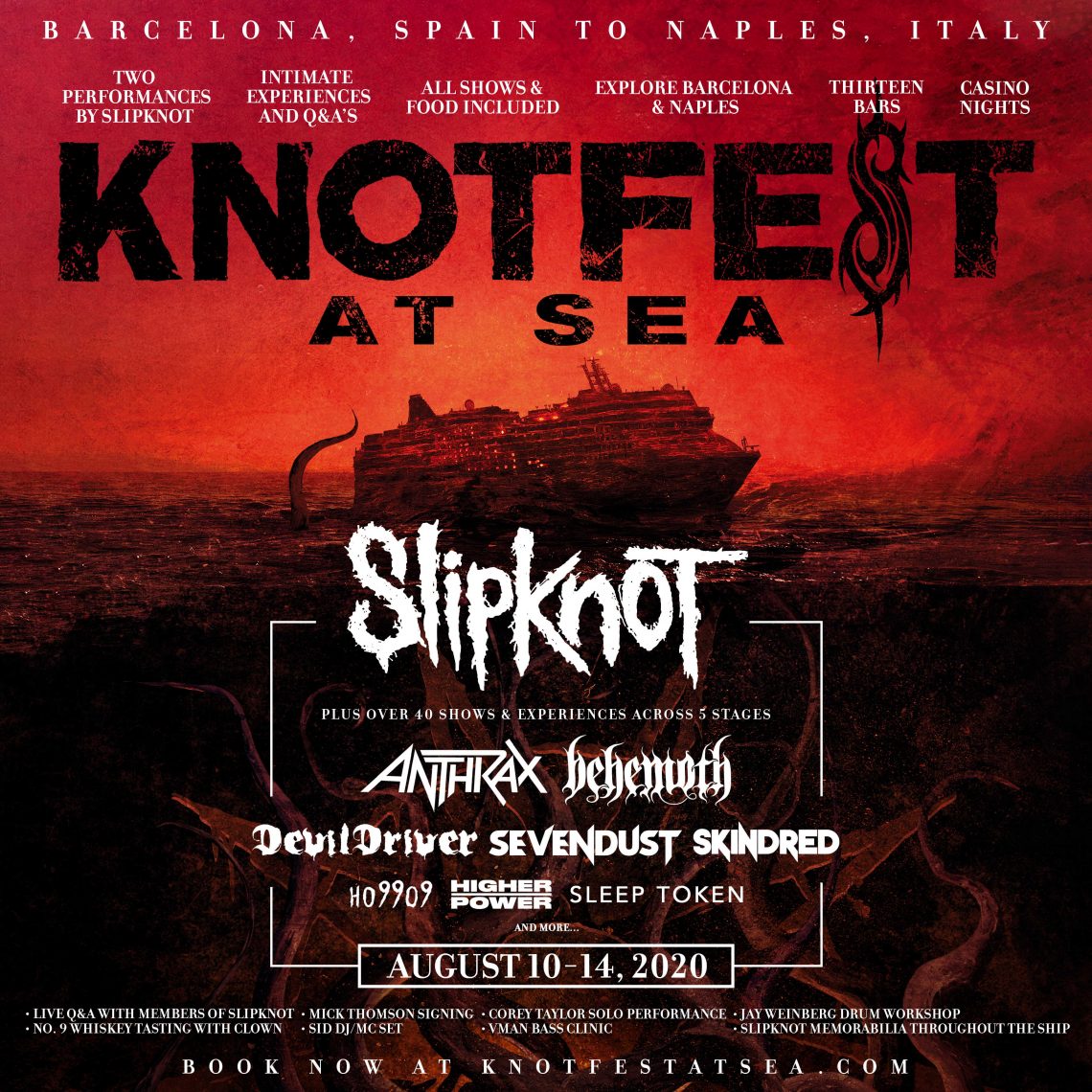 Ho99o9, Higher Power and Sleep Token, With More To Be Announced

Knotfest At Sea, the inaugural cruise event from the music and lifestyle phenomenon, Knotfest, created by multi-platinum, genre defining metal band, SLIPKNOT has today announced the first bands that will be joining the line-up when the cruise sets sail from Barcelona on August 10th. As well as two headline sets from SLIPKNOT, the cruise will feature a killer line-up of performances from Anthrax, Behemoth, Devildriver, Sevendust, Skindred, Ho99o9, Higher Power and Sleep Token with more to be announced.

Rooms on this historic voyage are already on sale from KnotfestAtSea.com with flexible payment options available.  Fans that attend the cruise will not only enjoy a monster line-up of the best heavy bands the world has to offer, but will also have access to an array of unique on-board experiences.  These include;

Speaking on joining the first ever Knotfest At Sea, Behemoth frontman, Nergal says;

“Maggots and Legions!  Our momentous tour with SLIPKNOT comes to an end in a few days and it’s been our biggest in Europe to date!  But I’m beyond excited that our comradeship with SLIPKNOT ain’t over yet… for we’re teaming up with them again for KNOTFEST at Sea!  We look forward to feasting again this Summer!”

“DevilDriver is extremely honored to be asked to play the first KnotFest At Sea cruise!  We cannot wait to sail the high seas together with SLIPKNOT and this killer line-up of bands.  So raise the Skull & Crossbones and prepare for a party at sea”.

SLIPKNOT continue to traverse the world to capacity crowds in support of their most recent No.1 album, WE ARE NOT YOUR KIND. Their live show continues to grow, filling ever bigger arenas and blowing minds around the world.  Reviews of their current sold-out European arena tour are unanimous in their praise – Kerrang gave London’s O2 Arena show its highest rating, stating “there is no better metal band on earth than this.” Full dates and ticketing info on the band’s upcoming shows are available here.

The KNOTFEST brand continues to expand around the globe, with landmark events held in the US, Japan, Mexico and Colombia, as well as 2019’s debut collaboration with French destination festival, Hellfest for KNOTFEST MEETS HELLFEST.  In additional new territory for 2020, the first ever KNOTFEST UK will take place at The National Bowl, Milton Keynes on August 22nd. The event will be headlined by SLIPKNOT, with line-up still to be announced.

WE ARE NOT YOUR KIND is highlighted by the current single ‘Nero Forte’, ‘Solway Firth,’ and the LP’s lead single, ‘Unsainted.’  The three tracks feature an M. Shawn Crahan-directed official music video, each of which trended worldwide on YouTube (all videos, not just music) upon release – ‘ Unsainted ’ at #1 worldwide for a full 24 hours.

Knotfest At Sea is produced by Sixthman, the industry leader in music festivals on cruise liners.

For Information on KNOTFEST head to Knotfest.com