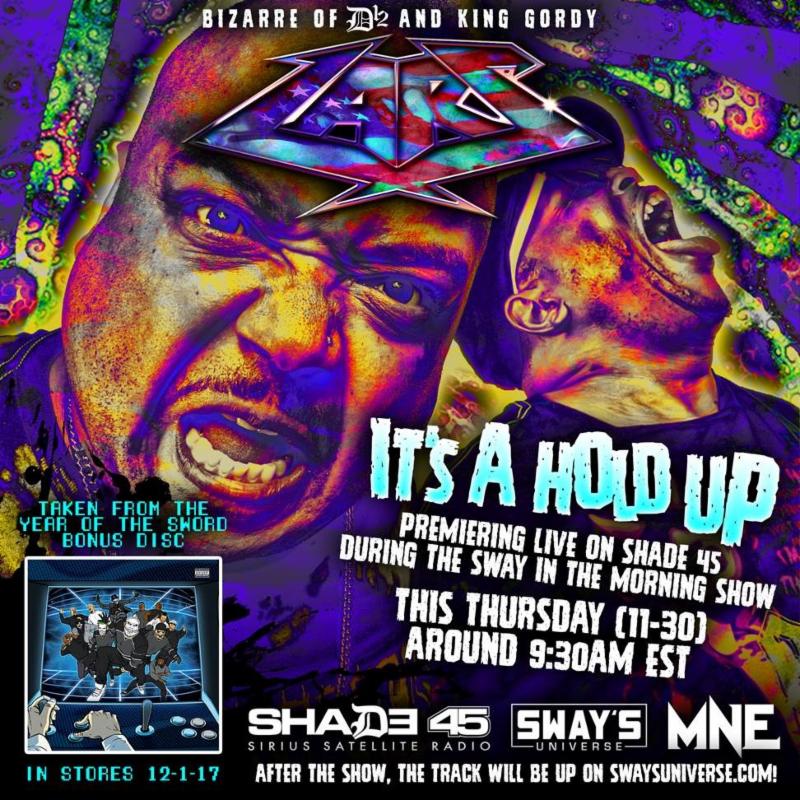 29th November 2017 0 By John Deaux
LARS (Bizarre of D12 & King Gordy) to Premiere New Track Tomorrow via “Sway in the Morning” on Sirius XM’s Shade 45
Tune in at 9:30AM EST on November 30 to Hear New Track “It’s A Hold Up”, then Stream After the Premiere via www.SwaysUniverse.com
“It’s A Hold Up” is ONLY AVAILABLE via the Twiztid Presents: Year Of The Sword Bonus Disc!
Twiztid Presents: Year Of The Sword out Friday, December 1, 2017 | Pre-Order Here

Twiztid and their underground label empire, Majik Ninja Entertainment, will release the upcoming full-length label showcase album, Twiztid Presents: Year Of The Sword, this Friday, December 1. Disc one of the compilation features 14 brand new, blazing tracks of MNE rappers joining together on each track, and is available for pre-order now via digital retailers here. The album can also be ordered in physical format (including discs one and two) along with several exclusive bundles here.
Twiztid Presents: Year Of The Sword features an exclusive bonus disc that includes nine new tracks only available on the physical format version, not digital, so get yours before they’re gone! Sweetening that bonus disc is a brand new track from recent MNE signees LARS (a.k.a. Last American Rock Stars), which is comprised of rap icon Bizarre of D12 fame as Miles High Davis and Detroit horrorcore shock rapper King Gordy as Blaxl Roze.
The track, entitled “It’s A Hold Up”, can be heard for the first time ever tomorrow morning (November 30) at 9:30AM EST on Sirius XM’s Shade 45 channel on the Sway in the Morning program. Make sure to tune in a bit early so you don’t miss a second of this track during its special world premiere! Afterward, supporters can stream “It’s A Hold Up” via Sway’s website, www.SwaysUniverse.com.
LARS says, “We’re very excited about having “It’s A Hold Up” premiering on Sway in the Morning. It’s a hood joint we had and we decided to put it on Twiztid Presents: Year Of The Sword to show our diversity! 2018 is year of MNE!”
Want more? Check out two additional new tracks from the compilation – “Fxcked”, featuring The R.O.C., Boondox, and Gorilla Voltage, and “Lights Out” featuring Twiztid, G-Mo Skee, and Mr. Grey of Gorilla Voltage – a throwback hard rock-influenced anthem. These two tracks are available on the main disc of Twiztid Presents: Year Of The Sword.
Listen to “Fxcked” – YouTube | Facebook
Listen to “Lights Out” – YouTube | Facebook
Twiztid Presents: Year Of The Sword features every single currently signed Majik Ninja Entertainment artist – including LARS, Blaze Ya Dead Homie, Young Wicked (and AMB), The R.O.C., Boondox, G-Mo Skee, Lex The Hex Master, Gorilla Voltage,and of course, Twiztid. What’s more, this is a double disc album including an entirely separate bonus disc including a brand new track from each artist/group signed on MNE.
Twiztid Presents: Year Of The Sword track listing:
DISC ONE:
1) Test Of Time (Intro)
2) Heads Will Roll (Gorilla Voltage & Jamie Madrox)
3) Turn It Up (Jamie Madrox, Blaze Ya Dead Homie, Lex The Hex Master, & Bonez Dubb)
4) Fxcked (The R.O.C., Boondox, & Gorilla Voltage) – Available NOW when you preorder digitally
5) Level Up! (Skit)
6) Their Fault (Jamie Madrox & Young Wicked)
7) Ignite (The R.O.C., Mr. Grey, Monoxide, Blaze Ya Dead Homie, & King Gordy)
8) Cut Em Up (Young Wicked & Twiztid)
9) Light’s Out (Twiztid, G-Mo Skee, & Mr. Grey) – Available NOW when you preorder digitally
10) Harassment (Skit 2)
11) Don’t Fxck Wit Us (Twiztid, The R.O.C., Lex The Hex Master, & ClockworC) – Available 11/17 when you preorder digitally
12) Better Than Ever B4 (Twiztid, Blaze Ya Dead Homie, Lex The Hex Master, G-Mo Skee, & AMB)
13) Flix N’ Chill (Young Wicked, ClockworC, Blaze Ya Dead Homie, & Twiztid)
14) Get High (Young Wicked, Mr. Grey, Twiztid, Blaze Ya Dead Homie, Bonez Dubb, and L.A.R.S.)
15) Galaxy (G-Mo Skee, King Gordy, & Jamie Madrox)
16) Don’t Tell Me (Twiztid, King Gordy, & Boondox)
17) Summon The Majik Ninja (Skit 3)
18) B.N.U. (Jamie Madrox, G-Mo Skee, Bonez Dubb, Gorilla Voltage, Blaze Ya Dead Homie, Young Wicked, & L.A.R.S.)
19) Did You Unplug It? (Outro)
DISC 2 (Available on the physical version only):
1) L.A.R.S. – It’s A Hold Up
2) Gorilla Voltage – Chaos Incarnate
3) G-Mo Skee – When I Get On
4) Boondox – Twenty-Seven
5) Lex The Hex Master – Beast
6) Blaze Ya Dead Homie – The Trunk
7) Axe Murder Boyz – Grindin’
8) The R.O.C. – They Shall Believe
9) Twiztid – Time Bomb
2017 has been a huge year for Twiztid and their massive underground label empire, Majik Ninja Entertainment. From signing huge rappers like Young Wicked and LARS, to representing at New York Comic Con and even announcing their own pop culture convention, Astronomicon, Majik Ninja is truly changing the game, expanding outside of the music world into crossover culture while growing more indisputable every minute. Plus, every album that has been released via Majik Ninja Entertainment in 2017 has hit the charts. Every. Single. One.
Majik Ninja Entertainment is keeping this winter even more chill with two upcoming performances/label showcases. First, MNE presents the fourth annual Twiztmas Party this Saturday, December 2 at Crofoot in Pontiac, MI, hosted by Twiztid and featuring performances from Blaze & Twiztid as Triple Threat, L.A.R.S., AMB, Gorilla Voltage and many others. The show is FREE with the donation of four canned goods and is open to all ages. If you do not donate, tickets are $1 plus TicketWeb fees. Doors open at 7:00pm. Tickets are available via TicketWeb.
Cleveland, OH MNE supporters – don’t miss this year’s New Year’s Evil show, taking place on December 31, New Year’s Eve, at The Agora. The show will feature performances from Twiztid, G-Mo Skee, Boondox, The R.O.C., Lex The Hex Master and more. Tickets are $25 in advance and $30 at the door, which opens at 6:00pm. This show is all ages and tickets are also available via TicketWeb.VIP packages are also available now via www.twiztidshop.com.
Majik Ninja Entertainment is destined for even bigger things in 2018. Check back for more updates at the sites below: