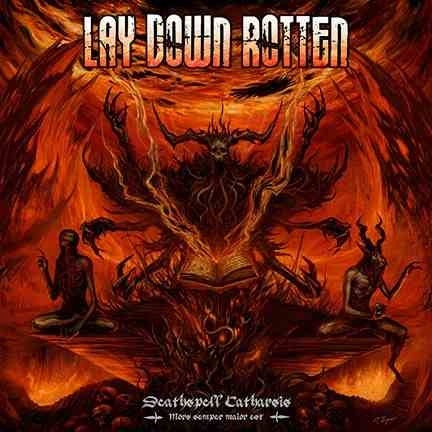 10th January 2014 0 By Mark Booth
Got a flurry of reviews (hopefully) coming your way soon people, however first up is LAY DOWN ROTTEN. Now I’ve never heard of LAY DOWN ROTTEN so after a quick search on them I can confirm that they are a death metal band (name kind of gives it away) and they hail from Germany and have been thrashing around since 1999. “Deathspell Catharsis” is their 7th album and will be released by Apostasy Records.

Right so what do you get for your buck with LAY DOWN ROTTEN…well you get death metal obviously, but a more angst ridden aggressive old school death metal. No need to do 200mph guitar wanks, a vocalist who is trying to be so “extreme” he sounds like a dying moose (or any animal really) in copious amounts of pain and a drummer who thinks he’s amazing because he can hit the skins quick but wouldn’t know a rhythm or beat if it came and beat him in the face repeatedly (and on the album he probably used a drum machine to add more beats to the music)…!!! Look at bands like Deicide, Autopsy, Death, Bolt Thrower, Immolation, Obituary, Sinister, Grave, Benediction – that is death metal (yes I know that there is lots of other bands I missed off…!!!)

“Deathspell Catharsis” is 10 songs and 50 minutes of brutally punishing death metal and brimming with unadulterated hate and throat tearing sound. LAY DOWN ROTTEN write some great songs as most are at the longer end of the spectrum and last around six or seven minutes, however they never let go of the listener and pummel your senses until they decide that the beating has finished. The production on the album is quite good, especially for a death metal band, and you can hear all the instruments clearly and are heavy and powerful and you can hear the bile in the vocalist as he growls his message to the masses.

So to sum up LAY DOWN ROTTEN, “Deathspell Catharsis” is a good old school death metal album and some of the melodies are dark, heavy, grim and brutal and they know when to speed it up and pound the listener senseless. However I must admit that this release isn’t ground breaking (far from it), but songs like “Zombiefied Electrified”, “Blood on Wooden Cross” and “Deathspeall Catharsis” are all great throat ripping death metal songs. Where LAY DOWN ROTTEN fall down though is that when the album is played in its entirety then it can become a little samey and they loosen their grip on you and little you wriggle away from their death clutch like a worm trying to wriggle off the hook. 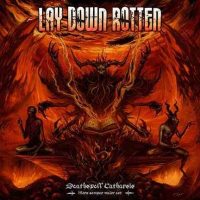 Stand Out Tracks: “Deathspell Catharsis”, “Zombiefied Electrified”, “Among The Ruin of A Once Glorified Temple” & “Blood On Wooden Cross”

Bands – We Want Your Songs!