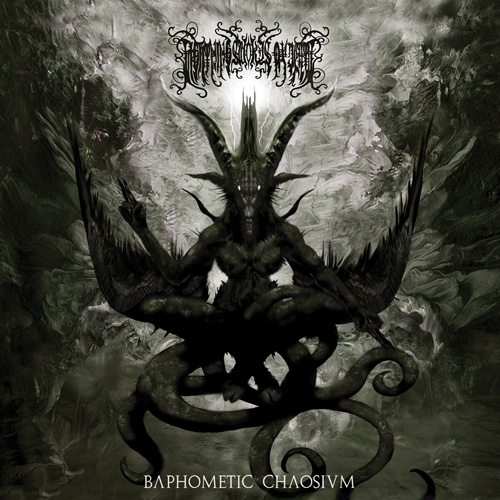 Lightning Swords of Death are back with their 3rd studio album (2nd album released via Metal Blade Records) entitled 'Bhaphometic Chaosium'. Personally I'm not a massive lover of the Black Metal genre however their logo gripped me as it looks remarkably like the Cradle of Filth logo, but that my friends is where the similarity ends.

Whereas COF tracks became more melodic to the point where some fans/ex fans say they 'sold out' (that could be a debate later on down the line)' LSOD come at you with a double kicker, high speed, full on Black Metal assault. The album opens up with the title track of the album which opens up on cue with a short eerie introduction followed by a short spell of drums, guitars and a nice bit of bass guitar work before going into 'normal' Black Metal mode, all in all, a good track.

The next track 'Acid Gate' brings us more of the double kicker drums and fast guitars, and vocals – as does pretty much the remainder of the album – after all, this is a Black Metal album – I think the fans would be a tad pissed off if they released an album sounding Warrant's 'Cherry Pie' now wouldn't they?

What I do like though about LSOD is their 'lets get off our arses and make it happen' mentality. Once they signed with Metal Blade Records in 2009 they continued to push their music through their DIY attitude, getting multiple tracks on the PSP game Undead Knights as well as a track featured on the soundtrack for the 2009 film The Stepfather, so a big 'hats off' to the band as that is quite an achievement for a newish band and one that had only just obtained a recording contract with a major player in the world of metal.

To sum it up, If you like Black Metal then I don't think you will disappointed with this album.