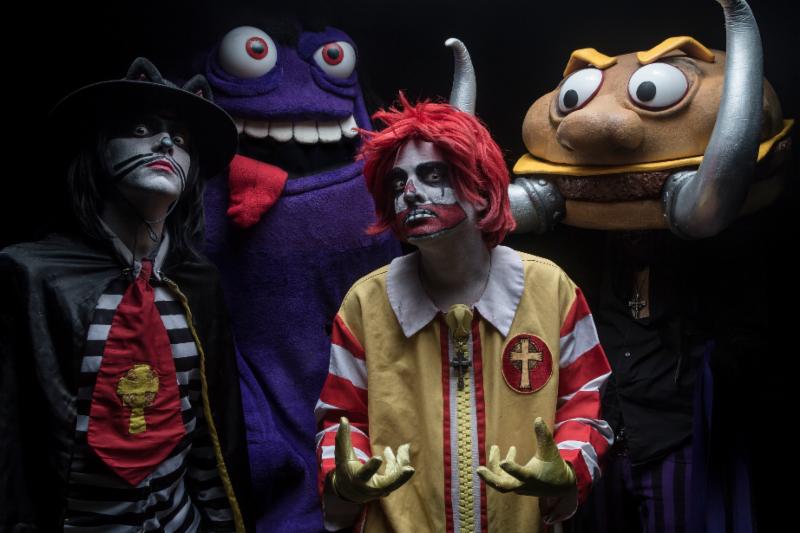 23rd October 2018 0 By John Deaux
Fast food-themed Black Sabbath parody kings MAC SABBATH are about to kick off another North American tour, beginning October 27 in Pomona, CA at Lagunitas Beer Circus! In celebration of the tour, the band have released their second recorded song, “Sweet Beef”, along with a brand new, zany music video for the track. The music video features maniacal marionettes in the image of the band members themselves!
This video is so psychedelic, it will leave you with the munchies! Deranged vocalist Ronald Osbourne says: “Mac Sabbath ‘meats’ marionettes! There will be blood!”
The “Sweet Beef” video concept was created by MAC SABBATH, Michael Serwich and Matt Scott, with maroniettes managed by Matt Scott and Rasputin’s Marionettes and editing and effects by Joe Seafus.
See below for all confirmed tour dates! Tickets are available via each venue. Learn more here: http://www.officialmacsabbath.com/
MAC SABBATH Confirmed U.S. Tour Dates:
10/27 – Pomona, CA @ Pomona Fairplex – Lagunitas Beer Circus
10/28 – Long Beach, CA @ Alex’s Bar
10/29 – San Diego, CA @ The Casbah
10/31 – San Francisco, CA @ Great American Music Hall
11/1 – San Jose, CA @ The Ritz
11/2 – Crystal Bay, NV @ Crown Room at Crystal Bay Casino
11/3 – Portland, OR @ Dante’s
11/4 – Tacoma, WA @ Jazzbones
11/07 – Calgary, AB @ Dickens
11/08 – Edmonton, AB @ Starlight Room
11/09 – Saskatoon, SK @ Amigos Cantina
11/10 – Regina, SK @ Riddell Centre
11/11 – Winnipeg, MB @ The Pyramid Cabaret
11/14 – Hamilton, ON @ This Ain’t Hollywood
11/15 – Toronto, ON @ Lee’s Palace
11/16 – Buffalo, NY @ Tralf Music Hall
11/17 – Grand Rapids, MI @ Pyramid Scheme
11/18 – Palatine, IL @ Durty Nellies
11/19 – Hobart, IN @ Hobart Art Theater
11/21 – Lincoln, NE @ The Bourbon
11/22 – Denver, CO @ Bluebird Theatre
11/24 – Scottsdale, AZ @ Blk Live
Mixing raucous comedy with borderline-horrific theatrics, the only thing more petrifying than impending health problems resulting from years of overeating is a MAC SABBATH show. Show attendees should be prepared to partake in the fun – MAC SABBATH puts on a theatrical, multimedia stage show – complete with a smoking grill, laser-eyed clowns, bouncing burgers and many more magical surprises… basically anything and everything an unwary show-goer could ever want in their wildest dreams. Named by Buzzfeed as one of the “13 Metal Bands You Didn’t Know How to React To” + Named as LA’s “Best Tribute Band” by LA Weekly.
“… one of the most interesting bands to come around in a long, long time. They have Dead Kennedys’ outrageous sense of humor mixed with total irreverence and ornate style on top of a solid, engaging performance (even if the crowd is reluctant to respond). So while this whole thing was probably thought up after eating too many pot brownies, it is one of the most brilliant ideas in a long time.”­ – Troy Farah, Phoenix New Times
“This is not a drill. Be it exchanging Black Sabbath’s “Paranoid” for a “Pair-a-buns” or “Iron Man” for a “Frying Pan,” these food-focused musical dweebs are cooking up something hot ‘n’ ready just for you.” – Alicia Lutes, MTV.com
“The most impressive-and terrifying-thing about Mac Sabbath is that they’re actually really good. Ronald channels his inner Ozzy onstage, from the manic jumping to the frantic hand waving…” – Bryan Rolli, Paste Magazine
“Even if the songs are dripping with onions and extra cheese, Mac Sabbath put on one righteous stage show, complete with smoke machines, gritty power chords, and endless head-banging.” – Chris Coplan, ConsequenceofSound.net
www.facebook.com/macsabbath/
Twitter: @macsabbath
Tumblr: macsabbath
IG: @officialmacsabbath